Take a voyage through the past 50 years 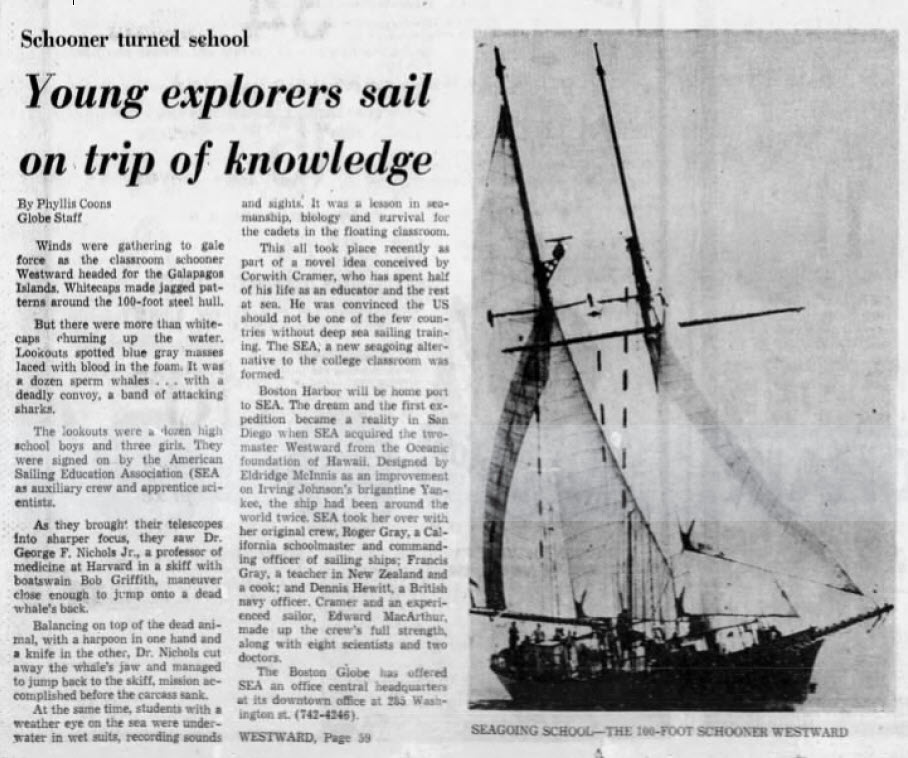 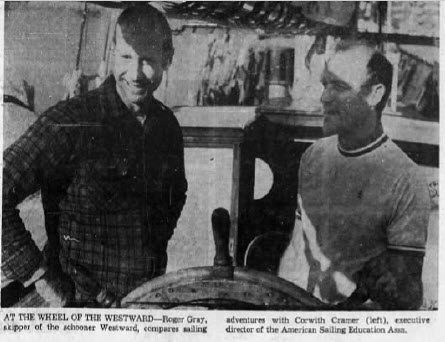 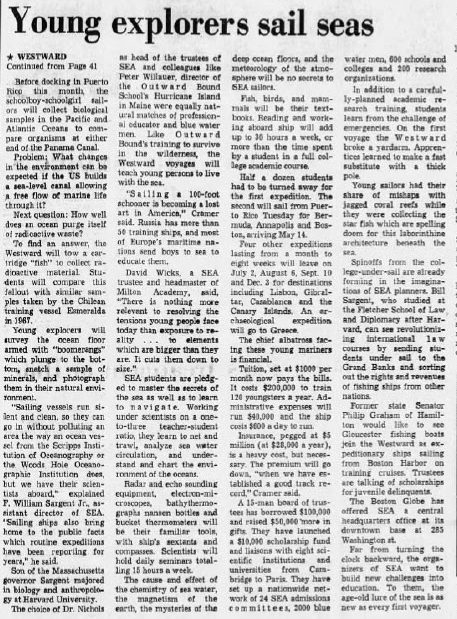 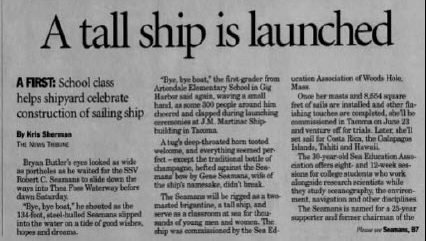 Westward To The Galapagos, SAIL Magazine circa 1972 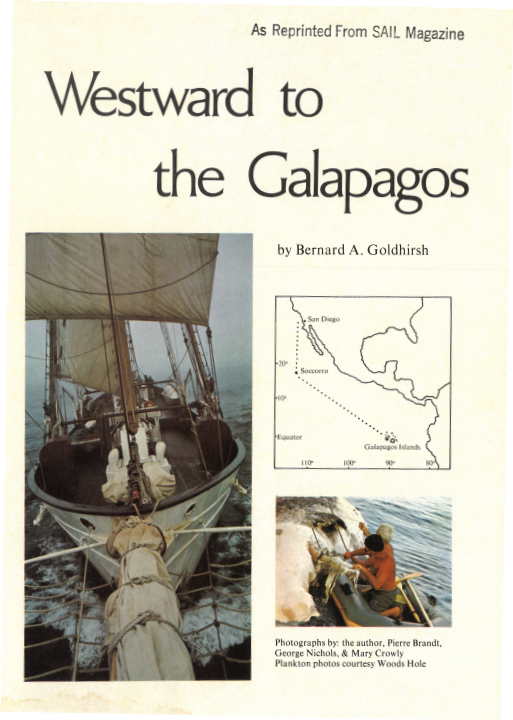 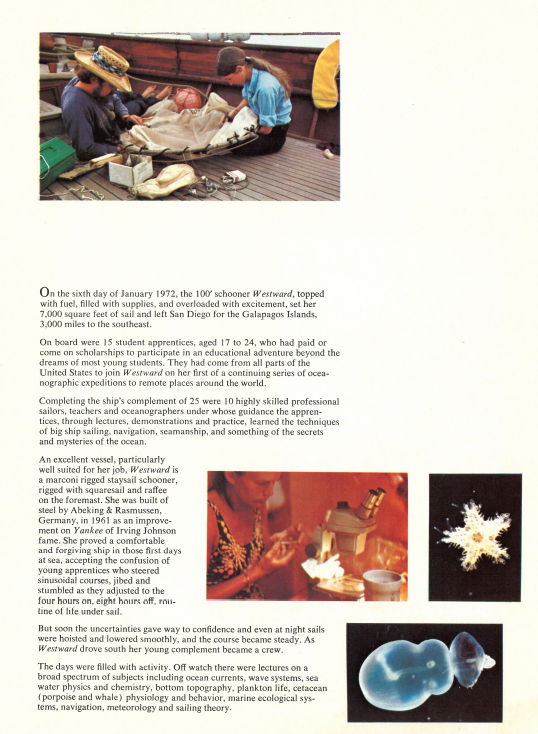 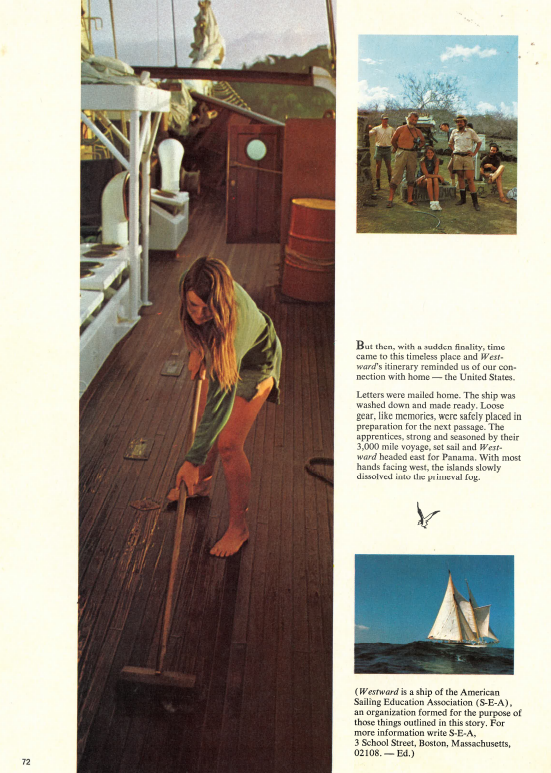 A Journal of the History of Falmouth, 1994 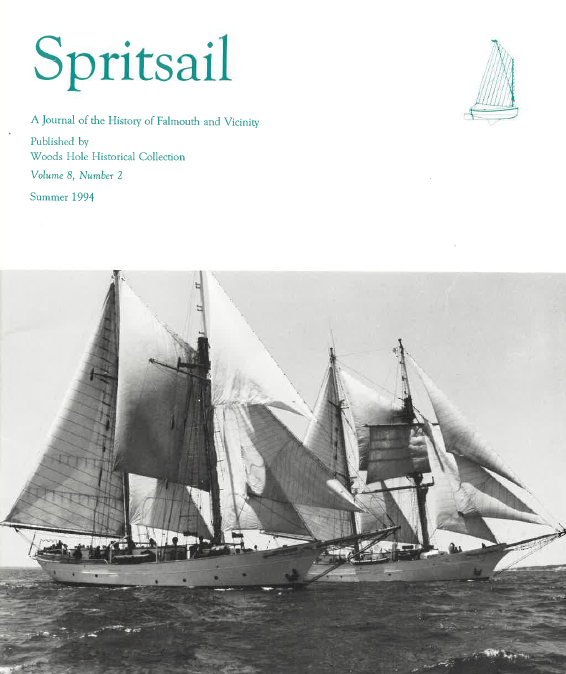 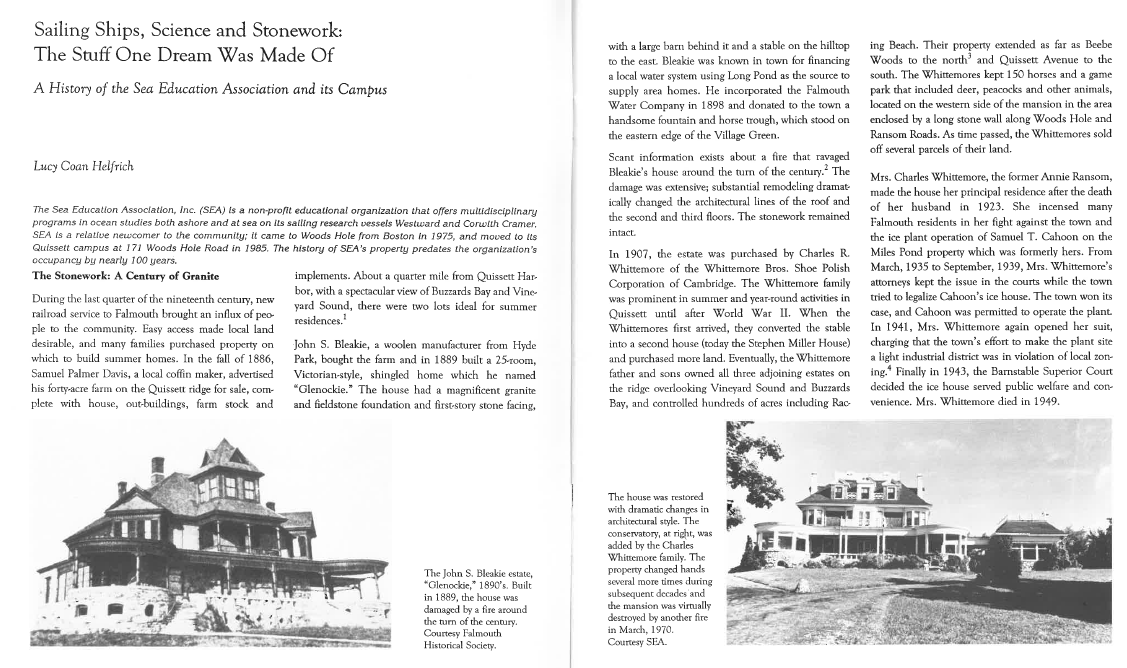 Westward’s brief passage last week, Boston to Woods Hole, was but a taste of her real life as a classroom, which for 280 days a year is spent 18,000 miles across North Atlantic latitudes from the Caribbean to Newfoundland.

But it was enough to whet her passengers’ seagoing desires, as the graceful two-master slanted under lowering skies with staysails and jibs drawing steadily in a freshening southerly. 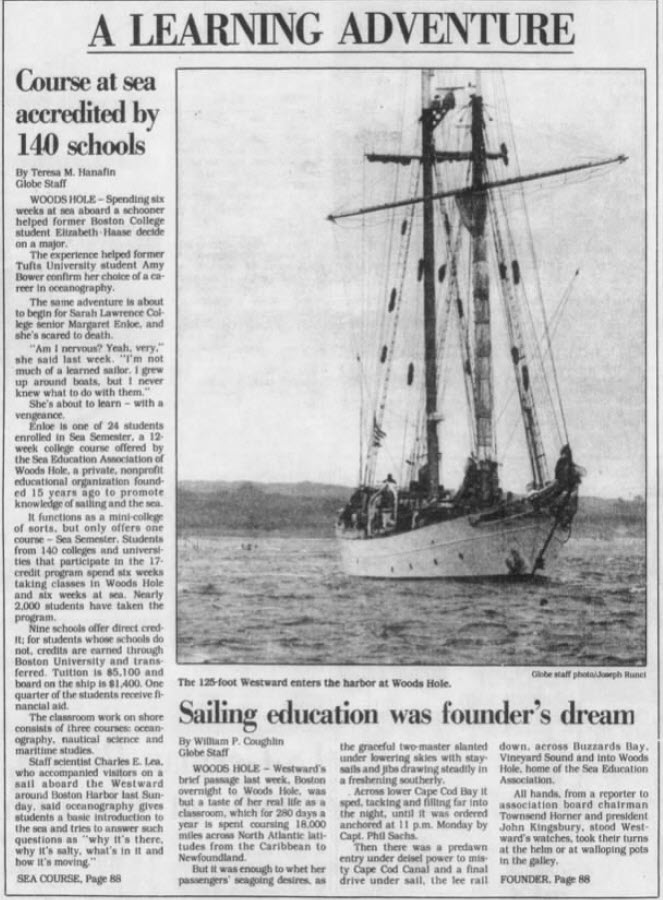 In 2018 and 2019 SEA traveled to Hunga Tonga-Hunga Ha’apai with scientists from NASA’s Goddard Institute to study the volcanic island as it offers insight into the geologic dynamics of Mars.

The New and the Lost World of Hunga Tonga-Hunga Ha’apai
NASA Blog, October 2019

Making a Connection in the Kingdom of Tonga
The Earth Observatory, NASA, 2020 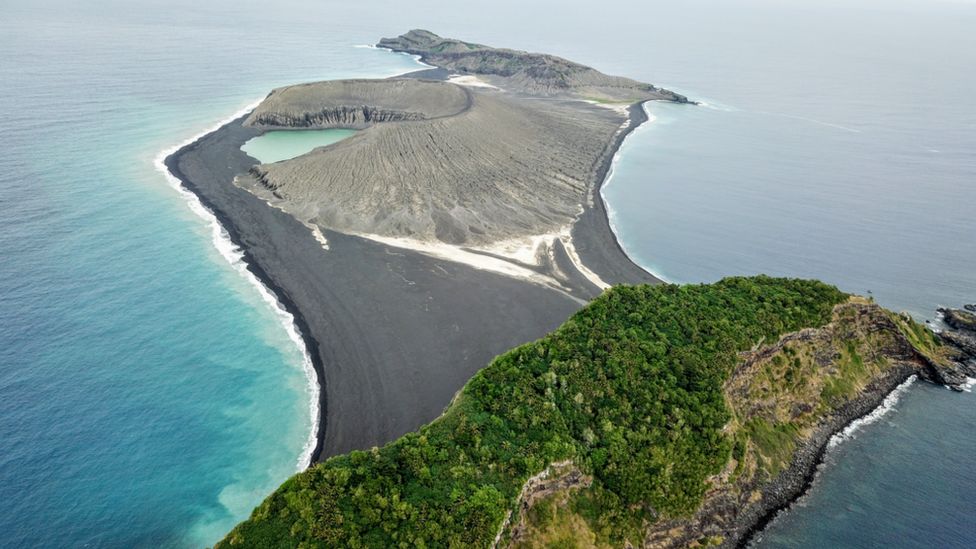 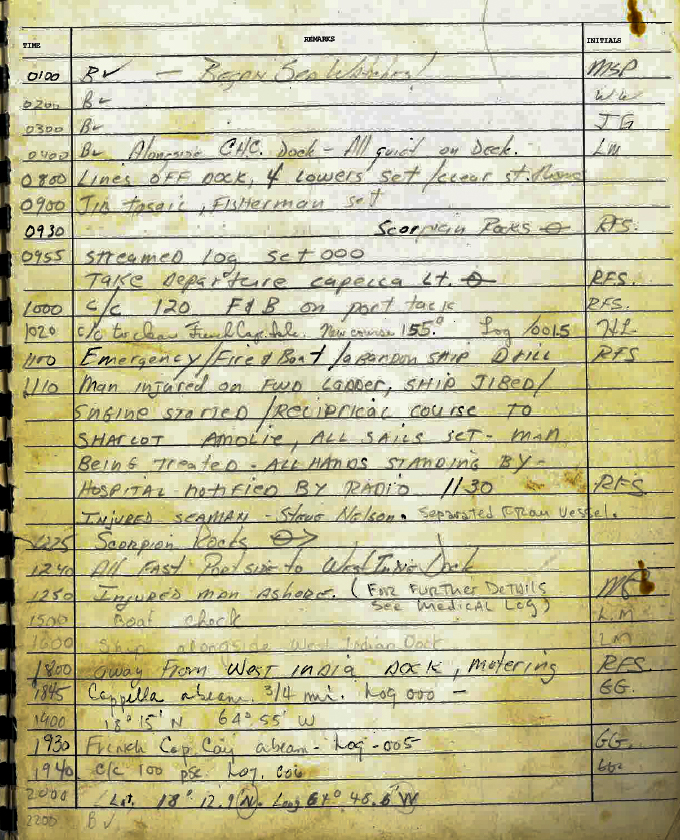 Voyage out of Charlotte Amalie, St Thomas, US Virgin Islands

Yachtsman, “Aboard Myth Of Malham In The Fastnet Race 1949″

Prior to founding SEA, Corwith Cramer was an experienced ocean racer. Here’s a look back at the 1949 Fastnet Race. Cramer is described as, “very young and enthusiastic, a first-class hand on deck.” 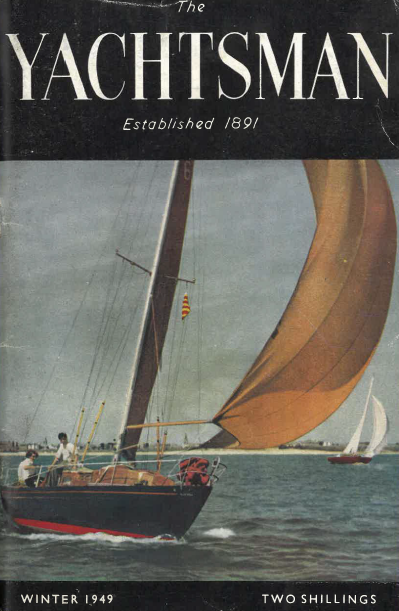 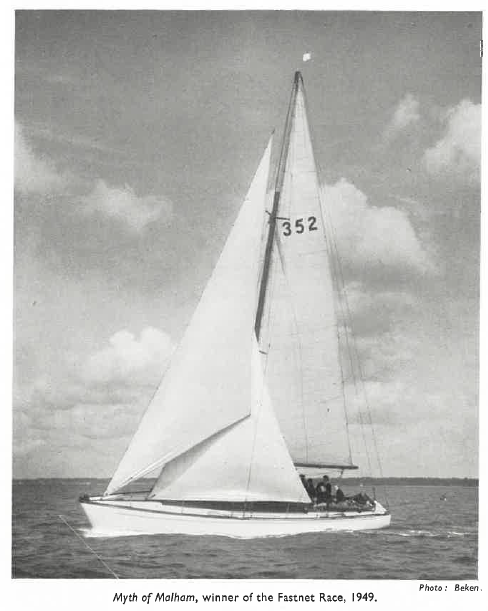 It’s time I recorded the events of Duncan Island (Isle Pinzon), the most inhospitable hell-hole this side of Antarctica.  This was the last Galapagos island we were to visit so I, and a group of other hale and hearty idiots, went ashore in search of the elusive Galapagos gigente tortoise.  Duncan Island was tough from the start.  There was no anchorage or any convenient landing site, but a crew of 9 (including myself) went ashore anyhow to see what we could see.  We hurriedly scrambled ashore and tried to make our way up a 50′ cliff to start the hike to the caldera rim 700′ or so up.

Ray Ashely was the third person to start the trecherous [sic]cliff climb.  about 2/3 of the way up, Ray tried a new route and, grabbing on to a large boulder, fell head over heels to the rocks below. His fall seemed to last forever as he and the large boulder fell through the air.  I had to turn my head for I thought he was going to be smashed to pancake proportions.  Ray landed on his read end after tumbling 30′ and came up asking for Pierre, the ship’s doctor.  He escaped with cuts and bruises, a very lucky person indeed.

The island seemed friendly enough– at a distance, but up close it proved to be a torture-test, full of entangling bushes with thorns that seemed to reach out to scratch everyone’s bare legs.  We reached the caldera rim at about 10:00 a.m. with no sign of the tortoises.  Two hours of search produced nothing more than evidence that tortoises exist on the island.

Negatively speaking, however, we were scratched, tired, sunburned, and thirsty by noon.  It took us 2-1/2 hours to reach the ocean!  My feet are shredded with abrasion and blisters.  To cap everything I was punctured by a nail-like thorn which pierced my shoe.  And island such as Duncan makes me glad we are leaving the Galapagos, now some 150 miles distant.  And so, as the Galapagos set slowly in the west, much of one my life’s greatest adventures has come to a close.

I will never forget it. 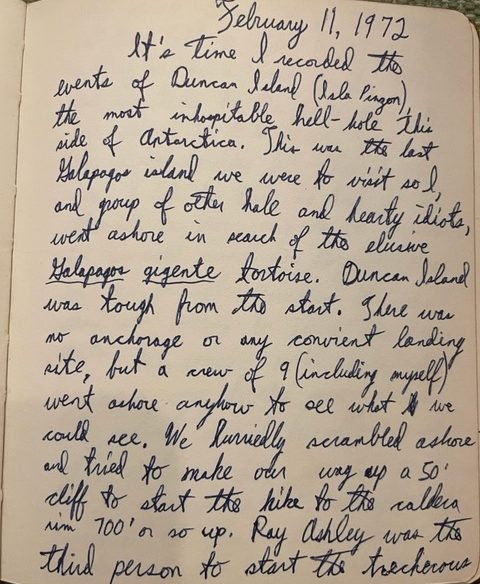 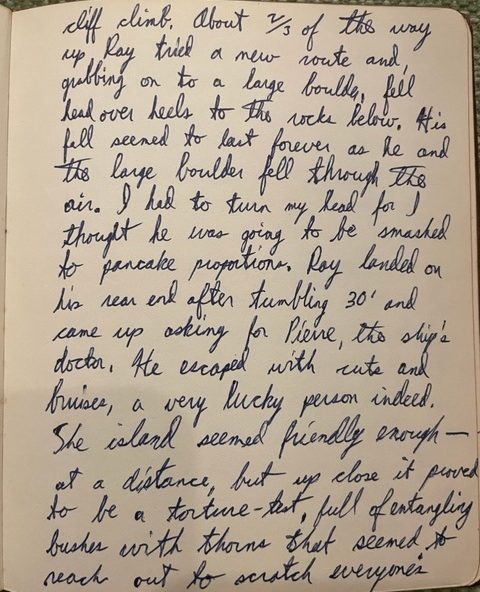 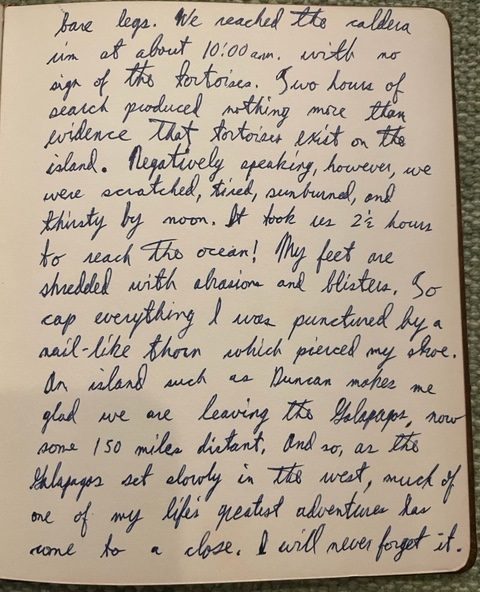