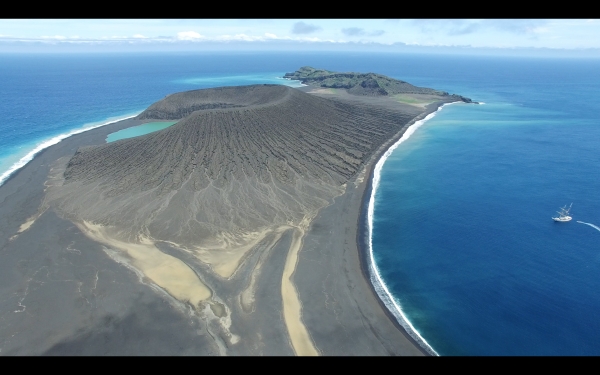 (The following blog post first appeared in October, 2018, and is being reposted due to public interest. See also two student blog posts from Oct 8 and Oct. 9 about the SSV Robert C. Seaman's visit to this new island.)

Greetings from the Robert C. Seamans in the middle of the South Pacific.

Over a number of days in the past week the students, faculty, and staff of SPICE 2018, Class S-282, have been extremely privileged to spend time on Hunga Tonga Hunga-Ha'apai (HTHH). The students have done an excellent job of summing up our time there so far, but what we have been doing here is as close to the original explorers of old as you get in the modern day, so here is everything we've done all in one place. It has been an honor to get to work so closely with new colleagues such as Dan Slayback and Jim Garvin from NASA, Vicki Ferrini from the Lamont-Doherty Earth Observatory at Columbia University, and observers from the Office of the Environment in Tonga, and the Department of Mineral Resources in Fiji.

The island of HTHH contains three unique parts. Two old pre-existing islands, Hunga Tonga and Hunga Ha'apai, which are thought to have originated in pre-historic times, and a connecting landform, which was created in 2015 by an explosive eruption that began underwater. That volcanoes erupt underwater and form new land above the water is not a new idea; this is how many of the islands in the South Pacific, among other places, were born. However, HTHH is unique in that it is composed of very soft, easily erodible material and yet it has not been eroded back into the sea in the way that might be expected, and as has occurred during previous eruptive phases, as recently as 2009. This presents an exciting puzzle. What is this island made of and what is it about this place that has led to its continued existence? With these questions in mind we broke up our students and staff into science mission teams, each with a set of questions to (hopefully) answer.

GPS TEAM: The GPS team's goal was to establish known ground control points (GCPs) using a differential GPS system provided by NASA. NASA has conducted an analysis of the change in area and volume of the new island, based largely on a sequence of stereo images captured by DigitalGlobe's WorldView-2 and WorldView-3 satellites. These satellites provide optical and near to shortwave infrared imagery at approximately 50 cm resolution. The precision of NASA's analysis has been limited by a lack of any known ground-control points on either the new or pre-existing (Hunga Tonga and Hunga Ha'apai) islands. In particular, the absolute elevation of the island has been unknown, while existing datum models appear to return elevations several meters above mean sea level. Knowing the precise elevation will allow NASA to more accurately measure the volume of the new island, which will be critical for building more accurate models of island lifetime, and for establishing a quality baseline against which future measurements can be calibrated. The GPS team succeeded in taking precision GPS measurements at several locations visible in the satellite imagery.

ROCK TEAM: The rock team had the hard job of both finding rocks for further analysis back at home and attempting some initial interpretation of the geological formations found on HTHH. In a normal situation finding rocks is a fairly easy thing to do, and that was the case on HTHH as well, there were rocks everywhere! What was hard, was finding rocks that were both in place and representative of the eruption history of the island. When HTHH formed, there was an explosive submarine eruption. This was observed in Nuku'alofa, Tonga, about 40 miles away. During many successive eruptive blasts over the course of a month, rocks were thrown over the entire island so very little is still in place from where it formed, confusing the interpretation of the geological features. Another very confusing aspect of the rock story is that the rocks on HTHH are from two chemical/mineralogical extremes with little to no rock in the middle as would be expected from a changing magma source over the lifespan of the eruption. The whole of the beach and surface of the volcano are covered with small to medium sized black, basaltic scoria. There are also lots of white to tan, andesite-like rocks and pumice present, but no intermediate phase. This tells us that perhaps instead of one eruptive vent, there were two with different magma chemistries. There is also evidence of folding and faulting happening on HTHH after deposition of the eruptive material and no sign of glassy ash grains so we think that the new landform might have layers from the seafloor that were uplifted and bent rather than being formed entirely from new eruptive rock material like the two older islands that it is connecting.

DRONE TEAM: Our captain, Jay Amster, and a team of staff had the great responsibility of flying the ships quadcopter drone in order to obtain images which can be combined and converted into a digital elevation model. It's an important job so that NASA can have a better understanding of the structure and depth of the ridge and gullies that make up the bulk of the new portion of HTHH. In addition to great pictures for the digital elevation models this team had a blast flying over the caldera wall and capturing some stunning images and video of both the land and the sea which we look forward to showing off!

TEAM FLORA: An intrepid group of staff and students set out to find, ID, and document any growth of plant material on the island. For the most part they found that the plant material is coming from the older, well established, islands, but there were a few patches that are on the new volcanic portion. An abundance of nesting birds made the task more difficult, but our team was able to get pictures of the patches of plants for further identification. They were also tasked with marking a plot for future research. The pattern that they laid out includes a control point and four experimental plots over which a 1m x 1m square quadrat can be laid for repeated plant counts as researchers visit HTHH.

BATHYMETRIC TEAM: One of our goals for our time at HTHH was to get more complete measurements of the depth and structure of the seafloor around the island in order to help elucidate how the island is eroding and make it more navigable for researchers in the future as there is no helpful navigation chart for this area. Since the start of the cruise our assistant scientists and engineers have been hard at work setting up a depth sounder on our rescue boat in order to fulfill this goal. While the equipment worked beautifully, unfortunately, the weather did not cooperate and we were unable to complete this portion of the mission. While we all feel bad that we couldn't make it work on this cruise we're excited about the prospect of perhaps needing to visit HTHH next year to continue our work.

WASTE MANAGEMENT TEAM: In addition to our scientific missions the purpose of our cruise is to work toward sustainability in our environment. As such, each of our students is part of a waste management team tracking how trash is dealt with in the places that we live (the Robert C. Seamans) and visit (Vava'u, Nuku'alofa, Suva). Team RCS, led by our chief anthropologist Jeff Wescott, took on the task of cleaning up trash from HTHH. Clearly much of it had washed in from the sea as there were a LOT of fishing buoys. We've been told that there are people in Nuku'alofa offering tours of HTHH, so we're disappointed but somewhat unsurprised to find evidence of human use of the island such as a fire pit surrounded by broken bottles.

While I am exhausted from the days of clambering and climbing over loose ground covered by rocks and managing so many different science projects I find myself incredibly grateful to the amazing crew, assistant scientists, students, and staff at SEA who made this whole project possible. An especially huge thank you to Kim Reed for the countless hours (often at odd times due to time zones), many headaches, and moments of panic that went into getting the safety and diplomatic clearances to go through, I truly don't believe that this couldn't have been done without her. Thanks also to Georgie Zelenak for lending her volcano knowledge and expertise to the initial conversations about this trip and to everyone at SEA world headquarters who helped make this trip a reality.