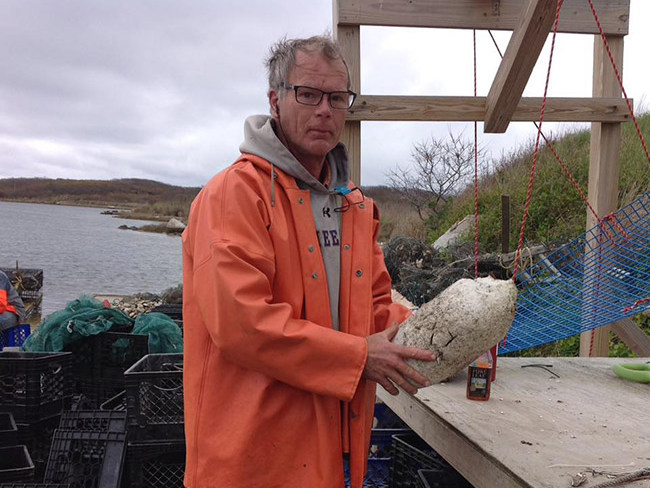 As a third-generation resident of Cuttyhunk and an aquaculture pioneer, Seth Garfield, W-23, has made a career on the water and he credits SEA Semester for much of his success.

An active member of the SEA community, Seth's involvement began in 1975, when he enrolled in SEA Semester as a senior in high school. He was the youngest in the class -- most other students were juniors from Cornell University. His captain was John Metcalfe, and the first mate was Wallace Stark. Wallace went on the sail many voyages as SEA Captain and, as Marine Superintendent, led the design and construction of the SSV Corwith Cramer.

In those days, he recalls, SEA students lived in a house on Eel Pond, and took their classes in Woods Hole in WHOI and MBL classrooms before setting sail aboard the Westward.

Despite being younger than the other students, Seth had experience growing up on the water on Cuttyhunk, and was soon handed more than his fair share of responsibility. He remembers going aloft with the first mate in the middle of the night to help repair the radar, and often found himself steering the ship into and out of the port of calls.

"They really taught you the right way, right from the beginning," he says.

Giving him such responsibility at an early age, he says, taught him leadership and gave him confidence. It's a lesson he instills in the young people working in his company, Cuttyhunk Shellfish Farms. "Giving employees early responsibility is important," he says.

After graduating from University of Rhode Island with a degree in Zoology (his credits from SEA allowed him to finish in three years), he worked as a marine consultant, helping power companies prevent marine growth in their coolant systems. That led to an interest in aquaculture. He went to work for the Cotuit Oyster Company, and in 1981, started Cuttyhunk Shellfish Farms. The company grows oysters in Cuttyhunk Island's West End Pond and distributes them throughout the Northeast. Cuttyhunk Shellfish also offers catering and has a floating raw bar!

In addition to his aquaculture company and eight years in the Coast Guard Reserve, Seth, with his wife, Dorothy, divides his time between Cuttyhunk and Dartmouth, has dedicated his career to teaching science, first at Friends Academy in Dartmouth, and then at the Wheeler School in Providence. He now teaches aquaculture at UMass Boston. Along the way, he received a master's degree in Emergency Management, which comes in handy as he has been Gosnold County's fire chief, on and off, for the past 30 years.

Seth credits SEA for helping develop his career. "The SEA experience and sailing on Westward were really key in my knowing I was going to be working on the ocean one way or the other. SEA also solidified my understanding of the ocean. To be hundreds of miles offshore, you better do your job or other people are going to be impacted."

An enthusiastic supporter of the SEA experience, Seth has recommended SEA Semester to a number of young people who have worked at Cuttyhunk Shellfish during the summer, and says he has enjoyed seeing the positive impact the program has had on their lives and careers. They include Nate Twichell (C-193), Julia Twichell (S-208), Sophie Davis (S-258), as well as Skylah Reis and Julia Grady who are both currently aboard the Corwith Cramer with class C-284.

"That's the beauty of the program: it takes kids out of their element and shows them a different aspect of life," he says.

His advice for SEA Semester students: get to know the crew and scientists, and maintain a network of contacts. "You never know what doors SEA folks can open for you," he says, "and write down and remember every moment."