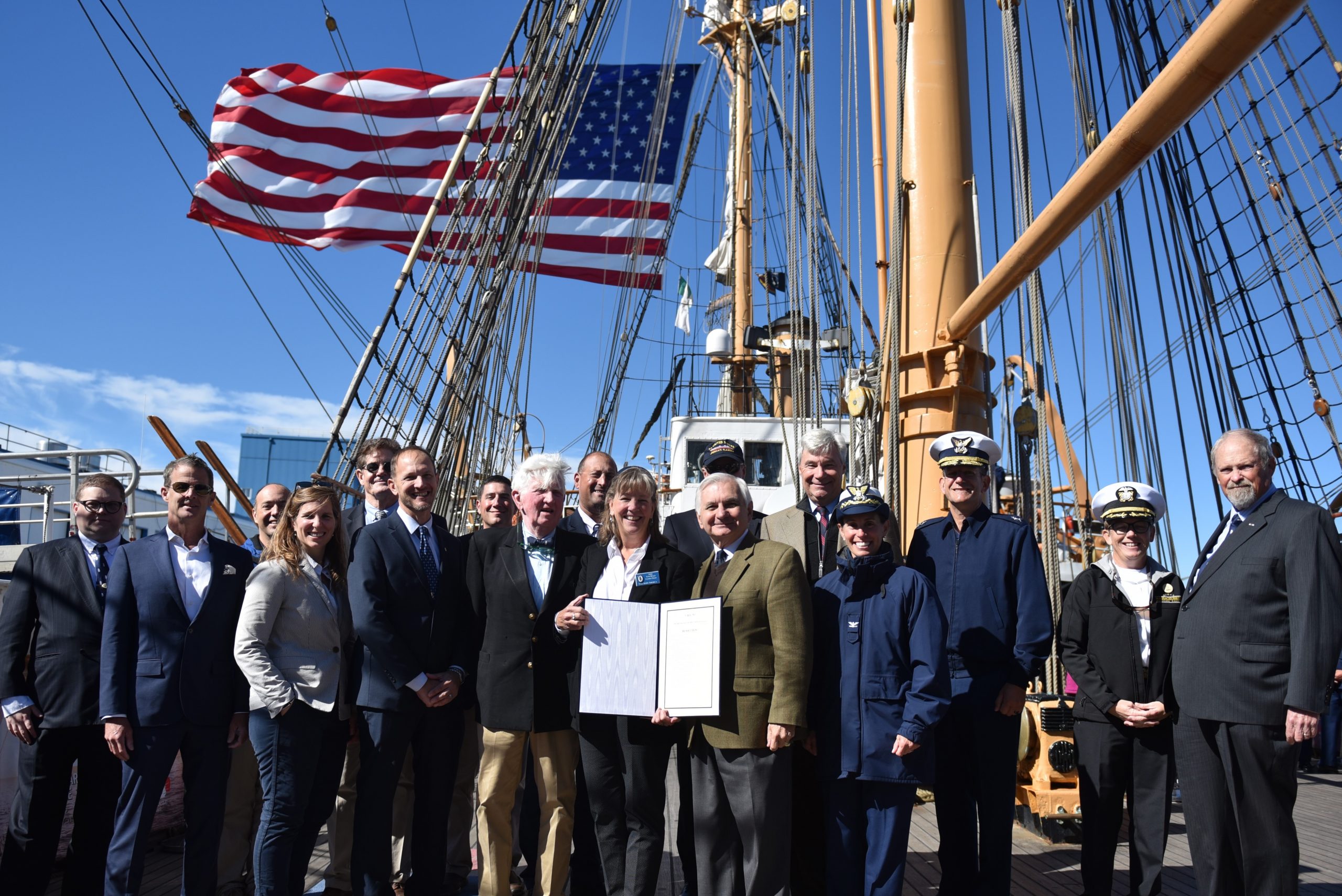 Tall Ships America recently announced that Senate Resolution 793 honoring Tall Ships America’s 50th anniversary was adopted on September 22, 2022. The  Resolution was submitted by Senator John Reed and Senator Sheldon Whitehouse of Rhode Island and was passed by Unanimous Consent. The Resolution commends Tall Ships America for advancing character-building experiences at sea and representing the tall ships and sail training community of the United States in national and international forums. Marking the occasion, the Resolution was presented to Tall Ships America by both Senators Reed and Whitehouse onboard the USCG Barque EAGLE, the premier sail training vessel of the United States, docked at the Naval Station in Newport, RI – a fitting location and platform representing the long-standing value of traditional sailing vessels to mariner training.

The Senate Resolution affirms the role Tall Ships America plays in promoting, supporting and encouraging training and education onboard traditionally rigged sailing vessels around North America. It recognizes the value of the existing collaborations Tall Ships America has with the Maritime Administration in support of maritime workforce development and the Coast Guard with respect to the regulation of sail training vessels, Marine Events of National Significance (including the Tall Ships Challenge series of races and port festivals) and professional mariner training and development.

“Whether it’s educating young people, promoting sailing and maritime history, or organizing fleets of historic tall ships for port-of-call events across the country, Tall Ships America has made many important contributions to Rhode Island, the nation, and internationally.  They use these traditional, seafaring vessels to help young people learn about important subject matters and develop confidence, competency, and courage.  The tall ships themselves are a throwback, but the values and virtues this organization instills and promotes are timeless,” said Senator Reed.

“I’m delighted to mark the 50th anniversary of Tall Ships America's founding in Newport from aboard the USCG Barque EAGLE,” said Senator Whitehouse.  “The Tall Ships bring educational and economic benefits to ports in Rhode Island and across the country."

One of the original founders and former Chair of the Board of Directors, Bart Dunbar of Newport, RI, said “The Senate Resolution is an acknowledgement of the long-term and powerful role that sail training and the tall ships have in maritime heritage and industry. From our humble and aspirational beginnings aboard the Brigantine Black Pearl docked at Bowen’s Wharf in 1973, we have seen lives changed and careers developed through the challenging and enduring activity of sailing a tall ship.”

"Opportunities for training and education onboard build teams, develop leaders, and are a powerful draw to the waterfront creating significant local economic impact. The safe and effective operation of these vessels have a deep and broad impact for anyone who comes onboard,” says Tall Ships America Chair John Brady.

Tall Ships America Executive Director Dr. Kris Von Wald adds, “Our members provide deep and lasting experiences for thousands of people every year, and we support the hard work, training and on-going skill development for the qualified mariners who are at the helm and on the deck ensuring safety and positive impact for all.”

Founded in 1973, Tall Ships America is a 501c 3 non-profit membership organization dedicated to enriching youth education through character building and leadership programs aboard tall ships.  The mission of Tall Ships America is to encourage character building through sail training, promote sail training to the North American public and support education under sail.