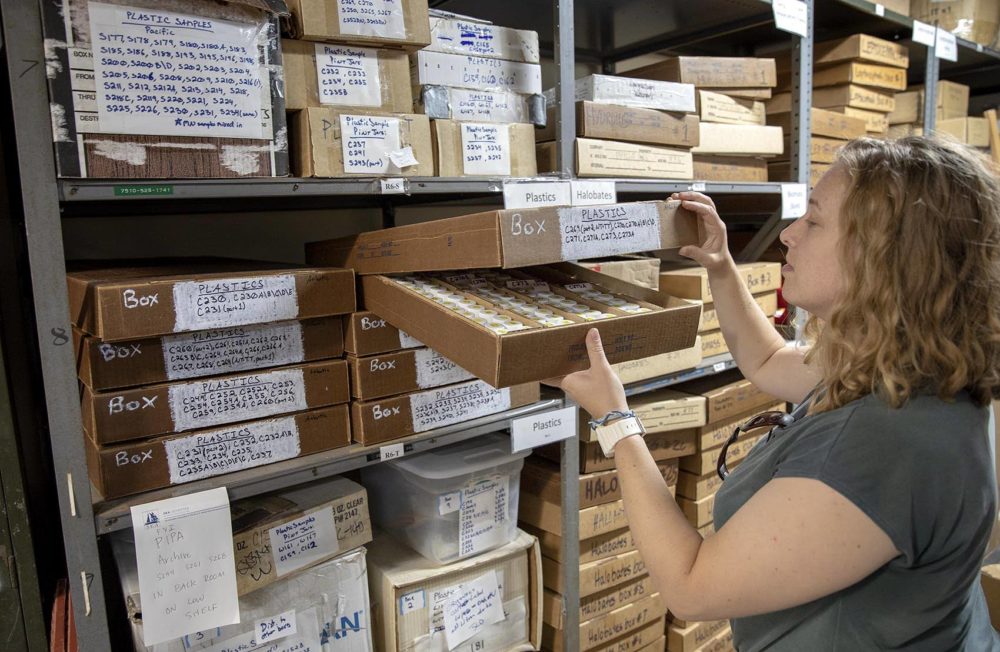 SEA's archives includes samples of microplastics collected over many years;

Visitors to the Madden Center on SEA’s Woods Hole campus may have noticed an unusual 8-foot plexiglass tube, filled with synthetic saltwater, standing in the main stairwell. The tube is a rise velocity chamber, built by SEA volunteer Ethan Edson (C-247).

Over the past two years, one may have also observed SEA Senior Research Assistant Jessica Donohue standing on a ladder by this tube, conducting experiments to measure the buoyancy of plastic particles. SEA Semester students have been collecting such samples in Neuston tows since the mid 1980s.

Despite collecting thousands upon thousands of particles, says Jessica, “There’s still a lot we don’t understand as far as how much plastic is in the ocean. We don’t know where it all ends up, so we can’t fully understand all of the impacts.”

But Jessica’s experiments may help solve a piece of that puzzle.

By measuring the buoyancy of plastic samples, Jessica says scientists can create a model with which to estimate how much plastic is more deeply submerged when mixed down by the wind.  They can also better understand how plastic particles move through the upper water column.

Jessica has long been interested in the ocean environment. An alumna of SEA Semester class C-210, she graduated from Binghamton University with a degree in Environmental Geology, and earned a Master’s in Environmental Science at the University of Rhode Island. Jessica joined the staff at SEA in 2014 to work with Research Professor of Oceanography Kara Lavender Law. In addition to doing research on the Woods Hole campus, she has sailed on about half-a-dozen semester and short programs.

To conduct her experiments, Jessica inserted particles of plastic into a small chamber attached to a fishing line. The chamber was lowered to the bottom of the tube and the particle released. Jessica then measured the time it took for the particle to float to the surface. She measured approximately 200 samples of varying size and shape which were collected at range of depths.

The data has now been collected, and much has been learned about how surface area, mass and shape influence buoyancy. The data is now being analyzed by Jessica and Kara, and will eventually be published.

A deeper understanding of how plastic particles move through the ocean may also help inform a solution to plastics pollution.

Still, she’s optimistic that the situation will improve. “I would say I have a positive outlook. I see people changing their behaviors. More people are aware of single use plastics, and younger people are very aware.”