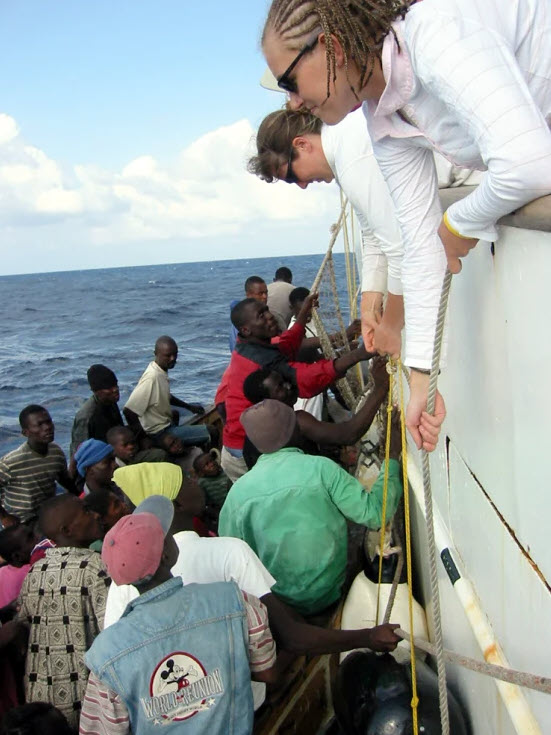 A student aboard SEA's 134-foot SSV Corwith Cramer spotted a man waving a red shirt on a distant boat about 10:30 a.m. Wednesday morning, 45 miles north of Jamaica, the island where the fleeing Haitians hoped to make a fresh start in life.

The students and crew soon learned the passengers on the drifting boat were in a desperate predicament - no food, no water, no way to get home.

"They were really frantic and they were afraid we were going to abandon them," SEA participant and University of Denver student Anita Kasch told The Associated Press. "I reassured them several times we weren't going to leave them."

The Corwith Cramer's 11-member crew then began a flurry of logistical and legal discussions with U.S. Coast Guard and Jamaican authorities to determine how they could help. Neither U.S. nor Jamaican maritime authorities were able to get rescue vessels to the scene quickly, and in radio consultation with them, medical advisers and the SEA headquarters in Woods Hole, Mass., the Cramer’s Captain  decided to bring the Haitians aboard and carry them to Jamaica.

The 49 passengers, including 14 young children, were brought aboard the Cramer, and were provided with food, beverages and water as they made their way to Jamaica.

As a result of the rescue, Sea Education Association, Captain Steve Tarrant, and the crew of the Corwith Cramer were selected by The Cruising Club of America to receive the coveted Rod Stephens Trophy for Outstanding Seamanship at the club’s annual Awards Dinner in New York on January 17. The Rod Stephens Trophy is to recognize 'an act of seamanship which significantly contributes to the safety of a yacht or one or more individuals at sea.' This was SEA's first rescue in its 35-year history.

Read more about the rescue at NBC News , The New York Times, and Bates News

Read more about the award at Sail World