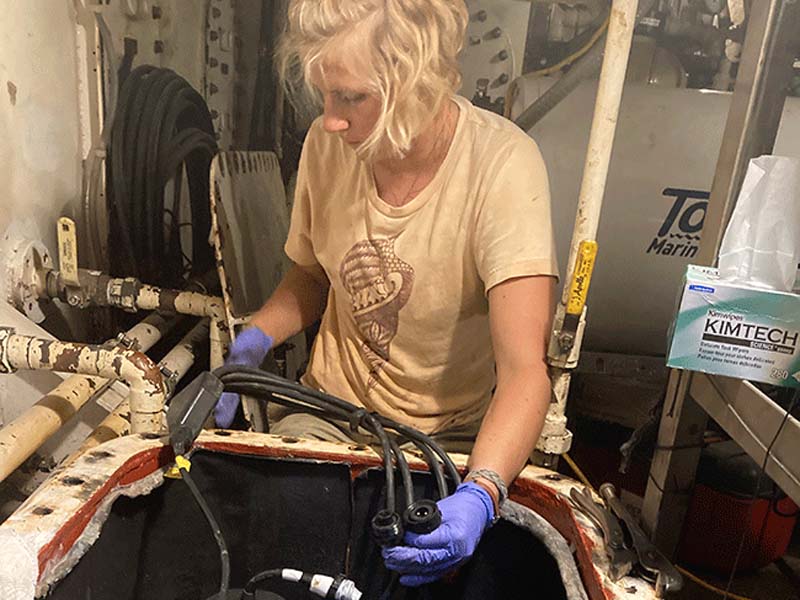 The CHIRP transducer bay; The bays were lined with coroprene (a cork/neoprene blend) and then filled with food-safe propylene glycol once the transducers were re-installed

Thanks to careful maintenance performed by members of SEA’s Marine Operations Department last summer, and a generous donation by a Boston-area technology company, student scientists aboard the SSV Corwith Cramer can continue to gather data from the ocean floor, at least for the next year or two.

During last August’s yard period in Rockland, Maine, Professor of Oceanography Jan Witting, Senior Assistant Scientist Anna Wietelmann and Science Coordinator Bonny Clarke inspected the CHIRP transducers, which were about 30 years old (nearly the same age as the Cramer) and found that not all of them were working. One needed replacement, and three required repairs.

“The CHIRP transducers are important because they measure the depth, so we know the topography of the sea floor we’re sailing over, which is pretty cool,” explained Anna.

With the CHIRP transducers, students can chart sea mounts, canyons, and other topographical features which can impact the water above though upwelling.

The CHIRP is also an important navigational tool and allows students to effectively deploy sampling equipment.

“Before I put any gear overboard the Chief Scientist will ask me the depth. We don’t want the carousel to hit the bottom,” Anna explained.

Close-up of an old transducer.

It’s also very important to know the depth when collecting sediment from the ocean floor with the Shipek Grab.

To complete the project, Jan and Bonny reached out to Massa Products Corporation, a pioneer in the field of electroacoustics that manufactures sonar and ultrasonic devices. Based in Hingham, MA, Massa generously donated a new transducer and serviced the other three.

The engineers are Massa were surprised to see that the transducers had lasted twice as long as their expected lifespan of 15 years, but they advised Anna that all the transducers should be replaced within the next few years.

Jan, Anna, and Bonny re-installed the transducers, lined the bay with coroprene (for insulation and sound dampening) and then filled them with propylene glycol, as the transducers need to be stored completely submerged in liquid to function properly. They used a propylene glycol solution, instead of just water, to reduce corrosion and growth.

Thanks to their efforts, SEA students continue to conduct cutting-edge research and gain insight into the mysteries of the ocean’s depths!