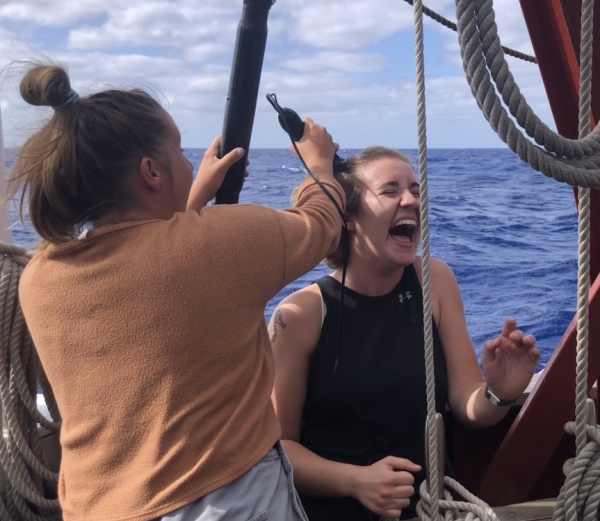 After waking at the ripe hour of 1030 am, I crawled out of my bunk in Sleepy Hollow with squinty eyes, blinded by the daylight. Even though it is practically the middle of the day by now, Sleepy Hollow is always so quiet. You never know when someone needs to catch up on sleep after spending the hours of 0100-0700 preserving fish larvae and sweating the course brails three times (I know I've been there).

I began my morning up on deck reading, relieved to be out in the fresh air. Sleepy hollow has begun to take on a smell similar to the zooplankton I count. After the first week aboard ship and a few days with a dysfunctional watermaker that transforms saltwater to freshwater, no laundry has been done yet. And by laundry, I mean putting your clothes in a bucket of saltwater and detergent.

After a restful start, I arrived ready for afternoon watch at 1300. Our first mate, Christine, cried "Let's set the main!" B and C watch respond: "Hands to set the main!," and all 15 of us made our way over to the mains'l halyard, ready to haul the biggest sail on the ship up the mast. We're finally approaching the trade winds! These easterly winds blow steady across the equator, and people who sail are really into them. This meant that we could finally revive the mains'l from its week-long slumber. Setting the main makes you feel pretty important.

After this event, I was sent to pick out slimy critters from a bucket and put them in little petri dishes. While I find this to be both fascinating and horrifying, I had a hard time focusing on this task. There were about six little whales (or maybe they were dolphins?) swimming around the ship. We all ran to the bowsprit to look at them beneath us, through a net off the bow of the ship. We hollered down through the ventilation and called for everyone to come up on deck and see.

Somewhere around this time, we hit 1000 nautical miles. I would say that it's crazy a boat like this can sail so far using only the wind, but the truth is we've been motor-sailing quite a bit with really light winds and a deadline to get to Hawaii by Christmas. At this benchmark, my shipmate, Stevie promised herself and us that she would shave her head. We each took a turn with the razor. You could just tell how free she felt giving her locks over to the Pacific. We all laughed and yelled and even sang a little song with the ukulele about her. She looks absolutely beautiful!

Still, there was more to this day. It was Kira's birthday (another one of my shipmates)! After class on deck we celebrated with cupcakes and yet more singing. Their birthday card was beautifully painted in watercolor by my watchmate Rachel, and had an albatross on the front≈one of the few megafauna we've seen so far on the trip.

I was distracted from lab yet again by some other megafauna. I was about to haul on the raffee sheet when I heard someone shout "FISH ON!" or was it "Sean!!" (the name of our captain)? Either way, I started to panic. Was Sean in trouble? We aren't supposed to yell on the boat, unless it's an emergency. People started darting for the quarterdeck. I was sure the captain had fallen overboard. Turns out, we had caught our first fish≈apparently a small Mahi Mahi, but it was the biggest fish I'd ever seen in my life. It was so blue, so full of color, I couldn't believe it was a living being.

This day aboard ship was a rollercoaster of emotions. I'm sure you feel that way, too, after reading this post. I think it's time I end this post and get some sleep (my favorite activity aboard ship). Before I do, I'll just say that I am incredibly grateful to be here, in a place (or rather, in many places) with so many people that support me and one another, help me learn, and go through this rollercoaster of emotions with me every day. There is much to see and do, but here I can finally breathe. It is an important thing to do, never forget it!