Highlights after Four Weeks at Sea 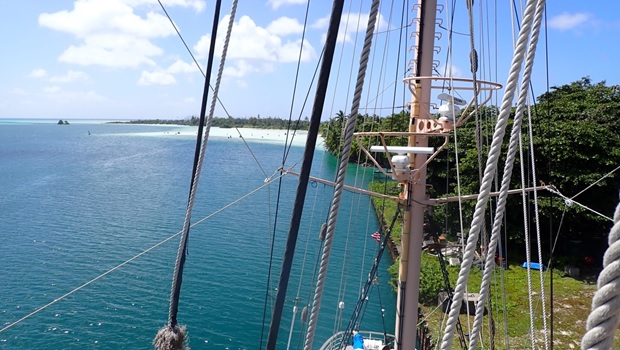 View from aloft on the fore mast alongside at Palmyra Atoll.

Weather
Mostly sunny with a high chance of squalls J Wind is NE force 5. We are experiencing chilly temperatures in the high twenties.

Hello friends and family, and family and friends of my new friends here. I will try my best to put into words what the past weeks have been like, but you'll have to bear with me as it has, in more ways than one, been a roller coaster. To start we have left Palmyra Atoll after just over two weeks of open ocean sailing. The transition from on shore life to life at sea was rapid. It seemed as though one day we were swimming in Ma'alaea Bay off Maui listening to whales sing to each other and the next we were sailing the ship through large squalls in the middle of the night. Despite this type of experience being entirely new to many of us, we adjusted well and I can confidently say that the entire student crew has become quite comfortable in the duties associated with manning a tall ship. 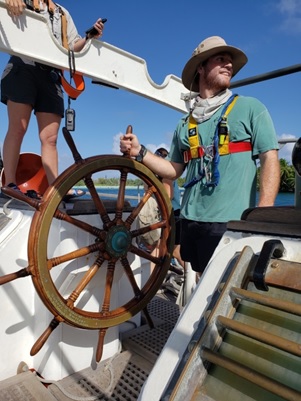 Me at helm as the ship made its way to the pier at Palmyra Atoll. Photo Courtesy of Ben Pham. (For lack of my friend Fisher)

Highlight #1: The two swim calls we had at the beginning of the journey before getting off shore were amazing. The first being directly off of Waikiki Beach and Diamond Head on O'ahu, and the other being Ma'alaea Bay, or as my friend Mary called it The Bay of Whales in Maui. Waikiki felt surreal as we all leapt from the bowsprit about 20 feet down into some of the clearest water I have ever seen.

Then we sailed to Ma'alaea Bay which was so full of whales that during a six minute observation while on a science watch I saw zero birds and seven whales. They were breaching and playing right by the ship at anchor. When we entered the water after they had moved on we could easily hear them calling to each other from below the surface.

Highlight #2: Learning a little celestial navigation has been rewarding. Stargazing at night is phenomenal and useful when sailing long distances. Since our journey to Palmyra was almost due south for the entire time, we were able to use the Southern Cross √ a constellation that acts as a marker for the South Pole √ at night to guide us. Just put the tip of the cross on the bow sprit and keep going.

Highlight #3: The coral reefs in Palmyra. They were straight out of a David Attenborough doc. We saw so many fish, sharks, manta rays, and such a wide variety of beautiful coral. Thanks to Eban Charles and his Go-Pro I think we will have plenty of footage to show. He has been the real Cousteau of the crew.

Thinking about Our Journey

What does it mean to be sailing through the Pacific aboard a large ship with two masts and some sails to go along? At first when thinking about my experience with SEA I didn't think much further than the basics. It would be fun, we would be crew as well as students, and we would likely visit a tropical island that few people get to see. These were the things that came easy to me. After some more thinking provoked by a couple of great classes led by our professors on shore I realized that there was much more to it.

I grew up in Gloucester Massachusetts where tall ships are a key feature of the town's culture. So, ships like the Robert C. Seamans are no new sight to me, but aside from seeing them around the harbor and going out for a few day sails, I didn't have any knowledge of the life aboard such a vessel. Some of my friends here had never spent much time by the ocean let alone had any interactions with tall ships, so this was new to everyone in some capacity. I had been able to predict that feeling though, that this was going to be a unique part of our lives once we joined the Seamans in Honolulu. What I did not think of was how others would view us on our journey from O'ahu to Palmyra.

On our second day we sailed out to an anchorage off of Waikiki. The thing that caught my eye first was the abundance of helicopters providing tours to those visiting the area. They were taking fairly low sweeping passes along the beaches and their clusters of hotels. As soon as we anchored though, it felt like they came a little lower, and then it became obvious that a few of them were circling us. I had never been to Hawaii, but with my preconceived notion of tall ships being an everyday sight I thought it weird that a helicopter tour would take time out of its usual route to circle one. Then the kayakers and paddle boarders came. They would swing around the stern of the vessel, see that it was registered in Woods Hole, MA, make a funny remark like ⌠you all certainly came a long way, or ⌠I bet you could use some shore time after such a long sail, and then continue on.

Time on shore was the last thing any of us wanted after spending the last six weeks in anticipation of this moment, but how could they know that. The story was the same when we anchored a couple days later in Ma'alaea Bay in Maui. A tiny outrigger canoe packed with six or seven people came alongside and asked if we were jealous of all their space aboard. After this we got underway. Once offshore with no people around I forgot about these events and how they made me feel. Then when getting to Palmyra it happened again.

The station staff there were fascinated as they had never seen a ship like this tied up along their wharf. We completed a trade mission when we offloaded three large barrels of gasoline used to fuel their generators and vehicles, and took on a bucket of coconuts. They think they got the better end of the deal but now we have all this free deck space (so much more room for activities!) plus a refreshing glass of coconut water. That moment brought me back to lectures we had back in Woods Hole. Through discussions we talked about memorialization of the ocean and of tall ships.

All throughout the trip people who saw the Seamans likely memorialized it in some way, even just for a moment. Our ship is interesting because to most it represents the past. To me these ships are important because they represent the Golden Age of sailing which built my hometown. In a larger sense they represent so much more. The extension of European and Western power across the world's oceans, monumental advancements in oceanographic research, and a boom in maritime trade are all stories told by tall ships.

One of the most impactful things we talked through in that discussion however, was the darker side of that coin. The conquering, exploring, and trading that were mainly dominated by European and American parties resulted in the detriment of many. It can't all be romanticized tales of seafaring. We have to recognize the land grabs such as the one that resulted in the U.S. taking the Hawaiian Islands, resource exploitation, and blatant atrocities that were made possible by ships that the Seamans resembles. Lastly it is not often easy but, one can think of the ocean as a massive unmarked gravesite where countless individuals have lost their lives to slavery and war. Their stories are often never written but this journey has opened up a way for us to try and understand those events, and proceed thoughtfully through to the end of our travels. The oceans and the ships that sail them hold many stories and it is up to us to seek them out so that we can learn from the past and see to it that those stories are remembered.

P.S. To everyone back home I hope this finds you well. I am writing this on March 11 which means a big birthday shoutout all the way from 7-40.154 N and 155-32.073 to you Dad! I miss you and mom very much and can't wait to hear how your visits to see Iona go. Mom, you wouldn't believe how careful I've been with sunscreen, not one burn yet! Julian, I'm really looking forward to comparing our experiences. I've thought a lot about legacy, not sustainability as they are very different things. My bunk is second farthest forward, port side in the foc'sle, and it's been a bumpy ride. Also, I found the quote after going face first into the clock. Iona, you'll be happy to know I have performed Kokomo for some of the crew although it was very difficult with all the rolling. I'll work on getting a video for you. Abby, I miss you lots and can't wait to see you soon. Fisher, you wouldn't believe how well prepared I was to steer this thing after crashing the laser into all those boats last summer. That made for great practice. Lots of love to you all!