Seasickness: An Ode to Adventure 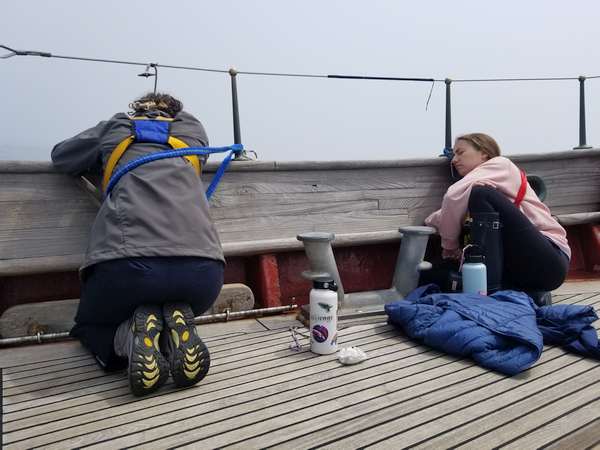 On the topic of today, we began at 0600 with a cry of “dolphins off the port bow!” There were, indeed, dolphins. Podding directly underneath the front bow of the boat, about five dolphins were keeping time with us, enjoying the waves the boat created. Other than that, it was mostly an uneventful day.

During our afternoon shift, C watch raised and lowered sails, bonded over our favorite movies while doing impressions of one another, analyzed some chlorophyll and pH in the lab, but performed no science deployments due to the rocky weather. This leads us into our central topic: seasickness.

While I am no stranger to seasickness, on this trip it truly got the best of us (most of us at least). We started off strong while we were docked or under motor power for the first few days. Once reaching our first destination, however, our luck changed. The ship’s crew rejoiced, for they were excited to finally set the sails and leave our fate to the mercy of the wind. Those of us that were new to seafaring had a bit of a harder time adjusting. There were a total of 5 rounds across the boat of “lunch coming back up,” if you will, of which I am not ashamed to say that most of them were me. That was the hardest day.

Some of us have remained on varying degrees of medication over the course of the week, occasionally causing sluggishness or headaches that won’t go away no matter how long we stare at the horizon. The crew’s remedy to seasickness is to give you saltines and water. The boat’s is to throw herself into even rougher waters.

With the passing days the inner ear seemed to recognize it could no longer steady itself here as it used to be able to on land, and would eventually give up on trying to keep you balanced. This did not mean that the seasickness went away, per se, but that it would instead remain confined to the galley (kitchen), bow (front of the ship), or the head (restroom).

Avoiding those spots as much as possible is key. Most of the time, however, we no longer wish to hurl ourselves into the water to escape all of the rocking back and forth. Sometimes, when we are lucky, it lulls us to sleep.

Watch duties make the motion fade and the haze of sickness fade to a distant memory. Steering the helm of our great 100-foot CeeCee, as we have affectionately named her, is like nothing else in the world. Doing science out in the middle of the ocean is an indescribable wonder. At the end of the day, when we close our eyes, we remember days filled with sunrises, sea shanties, stargazing, and some amazing new friends. And that, to me, makes the upchuck all worth it in the end.