An Island of Opportunity 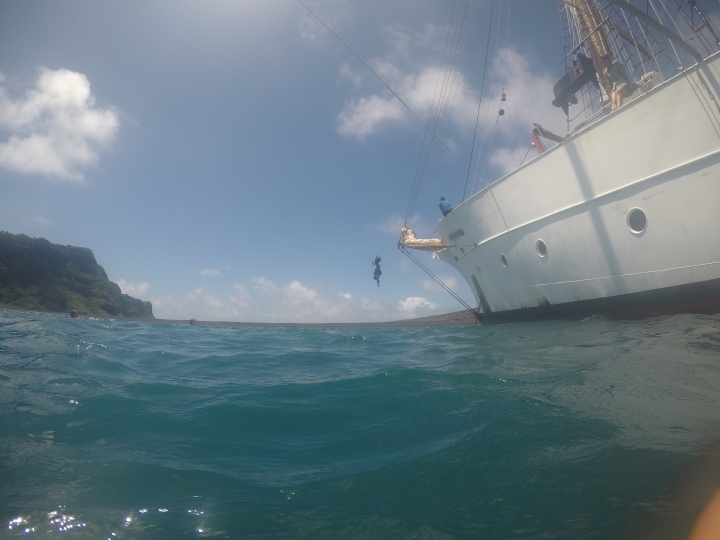 Natalie takes off during swim call, with a view of HTHH in the background

As we begin to wrap up our time here at HTHH, the data collection slowed down and we found some free time to enjoy the beauty and seclusion of the island. The day started late, with an 8:40 wake-up call, the latest we've been able to sleep-in in several weeks. After a fun frittata frenzy (don't you just love alliteration?) we signed up for shifts of anchor watch on the ship and free time on shore. Half of the students ventured to island in the morning, while the other half took to land in the afternoon. Our watch hung around on the ship for the morning. What was shaping up to be a relaxing morning of reading and card games was made much more exciting with a surprise swim call right before lunch. We climbed to the end of the bowsprit for the first time without our harnesses, and suddenly the way down looked like a much further fall than we initially realized. But with the encouragement of our shipmates, we mustered some courage and took the leap! 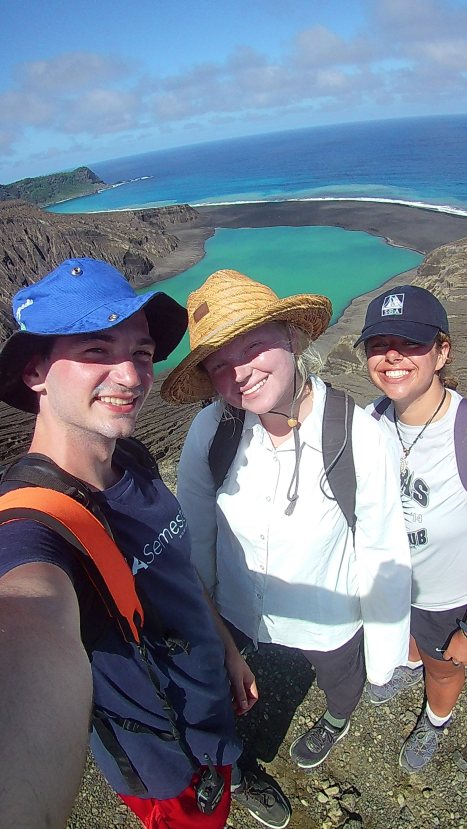 Cameron, Grace, and Natalie (left to right) at the rim of the Crater Lake. The Crater Lake and the South Shore of HTHH can be seen behind them

After lunch wrapped up, we started the daily shuffle of small boat runs to shore, to swap out students and crew who spent the morning on the island. Once on the rocky black shores, the two of us parted ways to chase our separate adventures. Natalie made the long haul across the north shore to the southwest corner with Grace and Cameron to begin a trek up to the crater rim. The path was an easy one to choose - simply go where the crevices are only 10 feet deep instead of 50, and you're good to go. The mountain was deceptively small; the trek up wasn't even the hardest part. The 15-minute climb was nothing compared to the 45-march out to the base of the crater. But it was all worth it once we saw the view from the top. We even saw a whale splashing around Mama Seamans! Oh, and we spotted Carlin journeying across the barren island towards the Crater Lake.

Carlin broke off with Eliza and Arielle, and we walked over to Crater Lake to investigate the legendary hot spots. Unfortunately, we were unsuccessful in locating them ourselves, but we had a nice time seeing how far we could sink into the sediment (I almost lost my shoe when, after sitting in sediment up to my thigh, my leg found the surface but my shoe did not). After some light whale watching on the south shore, we made our way back for a snorkel around the northern tip of Hunga Tonga. It was absolutely incredible, and I saw some of the healthiest and most diverse corals I will probably ever see. It was amazing to witness the rebirth of the reef and see how resilient an ecosystem can be when undisturbed by human impacts. Colorful reef fish (and the occasional reef shark) darted from rock to rock, where hundreds of precariously perched baby coral polyps grew out of the ashes of the volcanic eruption. We even saw some massive, old heads of coral, covered in ash, with smaller new polyps growing miraculously over them. It was amazingly hopeful to see the coral reef at the beginning of its life, and it left me with hope for the future of the budding diverse ecosystem.

We really appreciated the opportunity to explore HTHH on our own time today, while still carrying the geological and ecological knowledge we've come to acquire over the past few days of research. Data collection was still active across the island, as a team continued vegetation and bird surveys and another surveyed the corals using an ROV. And shout-out to our marine debris team as well, who worked tirelessly today to finish removing as much trash from the island as possible. We finished off this perfect day at HTHH with burgers, a beautiful sunset, and a movie night on deck. Once again feeling grateful for every opportunity this island has provided us. Cheers! 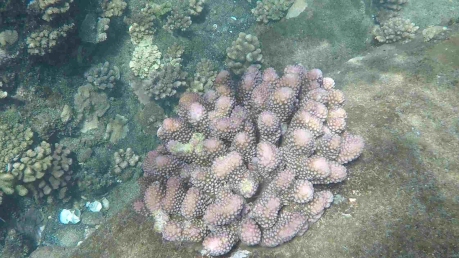 A bright patch of juvenile coral perches on a rock in the waters off Hunga Tonga.