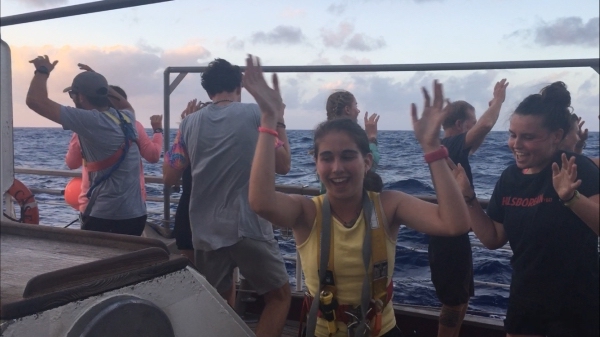 There was much celebration on deck today when we hit 3000 nautical miles sailed on this trip so far!

Weather
Wind from East by South, Force 5 with seas from the East with 6ft swells. 5/8 of cumulus clouds in the sky, and a temperature of 30˚C.

At this point it is T- 2 days until we arrive back in American Samoa and the past day and a half has given me a somewhat odd chance to compare where I started to where I am now. For the past 48 hours we’ve been dealing with some of the roughest seas and conditions since the beginning of our voyage. The jacklines (extra lines on deck to clip our harnesses into) are back up, the time spent on deck while “off watch” is a bit more limited, and the swells are tossing around the ship like tumble weeds. However, unlike the beginning of the voyage, sea sickness is a distant memory, we currently have the most responsibility we’ve ever had on the ship, and most importantly the ship now feels like home and the people on it an extension of my family.

For most of this trip, I’ve been so busy I’ve barely had time to think of home or anything in the outside world. Being this consumed by ship life in this way for this long has made time fly by and I’ve gotten so close to all of the other students and crew that I am torn between the part of me that is starting to miss home and that which wants this experience to go on forever.

To me, it feels like we’ve been sailing for three weeks and should have another two left (and I would be absolutely fine if we did). I’ve learned so much over the course of this voyage, not only in terms of sailing and
science but also about myself, like what I might want to do in the future and what I am capable of doing. I don’t want that to end. I never thought I could feel as comfortable on a ship in the middle of the oceans as I am now and part of me wants to know what would happen and how I would feel if I stayed here longer.

However, knowing how close I am to leaving, my thinking has also shifted to the people waiting for me back home who have no idea about all the wonderful experiences I’ve had for the past six weeks. It makes me realize how much I’ve missed them and it excites me to think I’ll be able to fill them in only a few days from now. It will be so great to be sitting down for a family meal with my parents, playing with my dog and little sister,
sleeping in my own bed, and taking a non- navy style shower for the first time since getting on the ship.

Being stuck in between these two truths has given me a lot to think about. But, the overall conclusion I have come to is this: my time on the Robert C. Seamans has been one of the most incredible experiences of my life and, while it is coming to an end, the memories I’ve created here I intend to carry with me forever, no matter where I am.