A Boat Birthday is One for the Books! 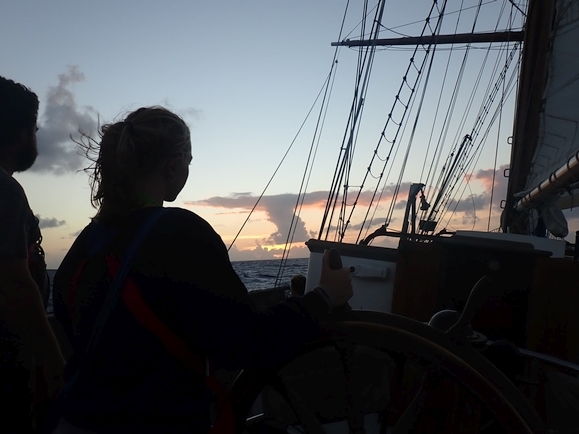 Weather
Force 5 winds out of the northeast, 5-foot seas

For us A Watchers, today marks our first completion of a full three-day rotation of our 6-12-6 hour sea watches aboard Cramer. As we settle into the new routine I’ve been clinging on to my circadian cycle for dear life; as you could probably guess, my efforts have been to no avail. During this time, I have been reflecting on the wise words of our dear Marine Environmental History professor, Matt McKenzie. During our time in Woods Hole, he once told us that when we were at sea, we wouldn’t care about the state of our bunks, the noises of the ship surrounding us, the cramped nature of our living quarters; but that we would simply be grateful to have a bunk to roll into at all. At the end of a watch all we could possibly need is a dark, cushioned space to pass out. I can say now that I have never concurred more with a statement in my life.

My bunk is located on the upper port side of Cramer in the forwardmost section of the ship. This portion of the ship experiences the most exaggerated movements, and since we’ve been underway, I’ve found my head rising and falling from my pillow, following the movement of the bow surging over the waves. I became particularly acquainted with this phenomenon yesterday morning, when I was woken up for my first ever dawn watch. It was 12:30 am on December 8 - half an hour into my 21st birthday - and the ship was rolling about in force five winds, generating six-foot seas which crashed against the hull like thunder surrounding my bunk. In 20 minutes, I was up on deck, surveying the state of the boat and preparing for our watch turnover. By 01:00 I was standing lookout at the bow, almost directly above where I had been sleeping just minutes before.

Before I had made my way forward on deck, I had been warned that taking my position up at the bow would guarantee a spray of seawater to my face, though this was not enough to deter me from going up there (my family and friends who have been with me on the water know that there’s nothing I love more than being in the splash zone.) And so I clipped in and kept my eyes to the horizon, beginning my 21st year on this earth under a cloudless Caribbean night sky. There is no sensation that I can compare to the feeling of standing just behind Cramer’s bowsprit in turbulent seas. As I clung on to the steel wire of the forestaysail, I felt like I was built into the hull itself - no matter how much we were being tossed up, down and rolled about, there was a steadiness to the ship that grounded and comforted me.

As the morning went on, I gazed up at the stars and could make out some of the milk (as my roommate Abby would say) of the Milky Way. It was one of the most beautiful night skies I had ever seen; I have the lack of light pollution this far out at sea to thank for that. Over the course of my six hours on deck, I saw more shooting stars than I could count, we’re at the start of a meteor shower in Gemini, and I guess I got to catch the start of it that morning. While gazing upwards on night lookout is always sure to be a treat, I was even more taken aback when I looked down towards the water and saw what looked like a mirror image of the gleaming stars above me. As Cramer ploughed across the sea’s surface, she triggered the bioluminescence of hundreds of organisms in the water below. With each crash of the hull into the water, a spark of greenish-blue lights would skim across the breaking waves, adding some color to the blackness of the ocean at midnight. I was delighted to have spotted it and thought about how many of those organisms we would catch and later identify from our nightly Neuston net tows.

Needless to say, I had a pretty darn good start to my birthday. Once the sun rose and A Watch was relieved at 7 am, I returned to my sanctuary in the fo’c’sle and got some shuteye. The rest of the day was filled with smooth sailing and warm wishes from my fellow crewmates. At the end of our daily class period on the quarterdeck, a pod of dolphins was spotted off the port bow; apparently, they like to play under the bowsprit up there. We said hello to our charismatic megafauna friends, and I was content. At 19:00, A Watch took the deck once again, and I returned to my favorite position as lookout. This time I knew exactly what to look for and turned my gaze down towards the blackness in the hopes of catching another bio-light show. What I saw was the cherry on top of the entire day: bioluminescent dolphins. Yeah, that’s right. Bio. Luminescent. Dolphins. At first, I thought the bitter effects of sleep deprivation were starting to take hold, but I later confirmed with Mahalia, A Watch’s amazing assistant scientist, that this was in fact a real phenomenon. As the dolphins swam forward, their movements triggered the fluorescence of organisms in the water column, illuminating their paths alongside, below and forward of the bow. It was the best gift I would never have thought to ask for.

So there you have it, a day in the life aboard the Cramer and the story of a uniquely unexpected, exceedingly wonderful 21st birthday. A ginormous shoutout to our stewards, Katey and Jackie, for baking me not one, not two, but THREE double-layer cakes with the blue frosting I had asked for. Another note of thanks and love to Addie, who woke me up for dawn watch with a perfectly made cup of birthday joe in hand. And it would be criminal not to send out another message of thanks (I guess?) to Davi, who took it upon herself to wake me up this morning by holding a dead flying fish up to my face - I’ve decided to name him Ficarus, because the poor little guy flew just a bit too close to the ship, and paid the ultimate price for it.

To Mom and Dad: I love and miss you both endlessly and can’t wait to share even more sea stories once I’m home. I had a wonderful moment of kismet during that dawn watch when I took a random glance at my watch, and the time was 03:33 on the dot. Dad, thank you for yet another heartfelt annual letter - I’ve been doing my best to channel my inner Mark Twain.

Ridge, I think about you all the time and can’t wait to share my stories with you as well. I hope you and the crew are wrapping up the semester in stride; tell everyone I say hi!