A Day in the Life: As Told by Abby 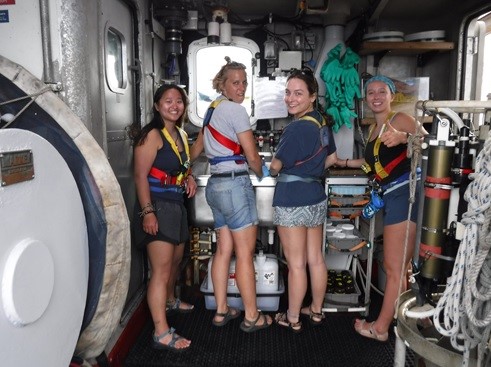 Katie, Anna, me, and Gabby in lab, analyzing the Neuston Net contents!

Weather / Wind / Sail Plan (from 1300 Watch Change)
Partly Cloudy, rainy and squally! We had the 4 lowers up, but then had to strike the main.

Close to Palmyra! About 1 day away!

Whew! What a day. Every day here seems to have so many different events and interesting things, that it's hard to remember what we did at the beginning of a watch, let alone a day. Recently, since getting into and crossing through the ITCZ (Inter-Tropical Convergence Zone), it has been hot and humid, and we've sailed through many squalls. We had been seeing heat lightening (lightening without a bolt, just a flash in the clouds) for a few days, but last night was the first time we had seen lightening with a bolt.

There was lightning and thunder, and we had to douse the main really fast.

Captain Allison seemed a bit stressed and focused on getting us out of the storm, but we students (notably, without as much responsibility) thought it was pretty cool with the sideways rain and loud thunder. The storm also brought a nice cool breeze, which was much welcome compared to the past heat.

Almost everyone is sunburnt at least a little bit (Sorry Mom, I got sunburnt a bit too); the sun at the equator is not to be underestimated! We are at a 5 degrees N, setting a record for how far south many of us have ever been!

We are so far south that at night we can see the Southern Cross in the stars. It has been really cool looking at the stars at night and learning different constellations from people on staff. Everyone knows a few different ones, and I've so far learned both names of specific navigation stars, new constellations, and seen the Milky Way!

Ever since we have been getting closer to Palmyra, we have been getting more and more birds (boobies, specifically) sitting on deck hitching a free ride (without paying or cleaning their fair share!). Last night, there was a bird sitting on deck and Nate accidentally stepped on it, so we moved it under one of the ladders. Apparently, the bird wasn't satisfied with that, and it bit Tierney (one of the mates) on the ankle. We then got Henry (one of the engineers) and he chucked it over the side.

That was a few days ago, and we thought that would be that bird-wise. In fact, we were wrong, and this morning my watch woke up to 4 boobies sitting on the deck, so we had to get Henry again and he deployed those birds over the side too. Everyone on deck got a good laugh watching him put on huge gloves and throwing them over the side (they're not dead, don't worry, just lazy- they fly as soon as they're thrown off the deck).

Overall, we have been having a great time. It's been amazing to see how much life there is in the middle of the Pacific, and being able to sail has been so fun. It's a great opportunity to hang out with everyone (even though we are all a bit sleepy from our watch schedules), but I've really enjoyed getting to know everyone on crew as well as my classmates too. Lots of fun, lots of laughs!

Notes to home: I'm having a great time here! It's been really nice not having my phone, and being able to be present. I can't wait to call you guys at the end of this!