A Hike in Nuku Hiva 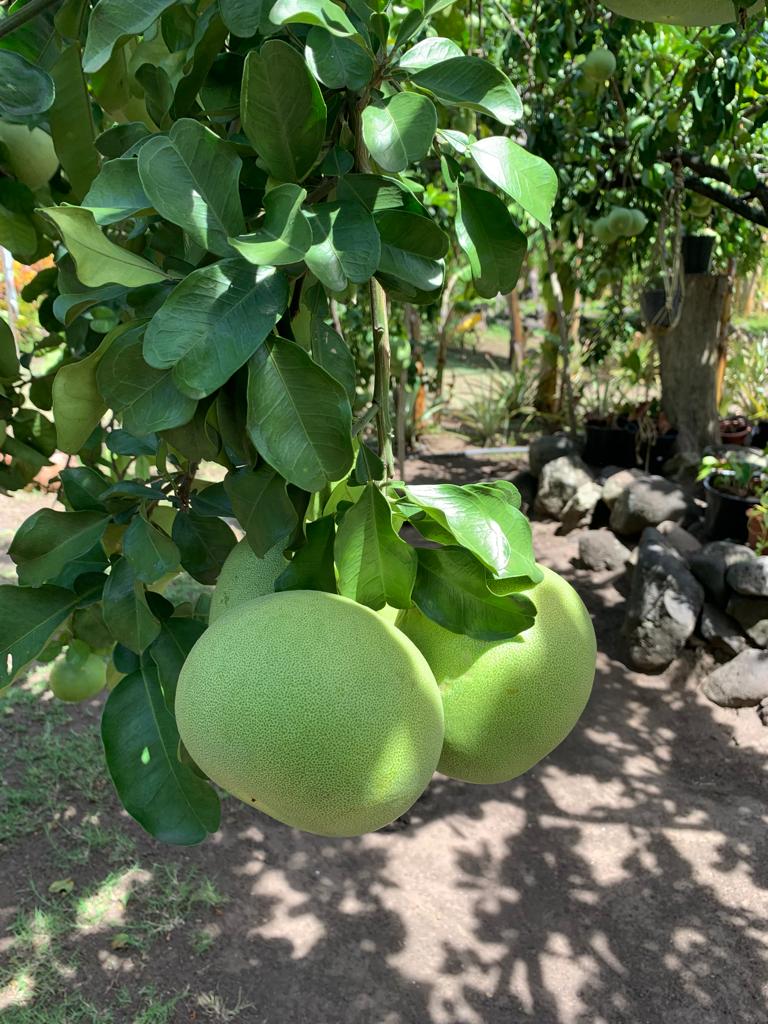 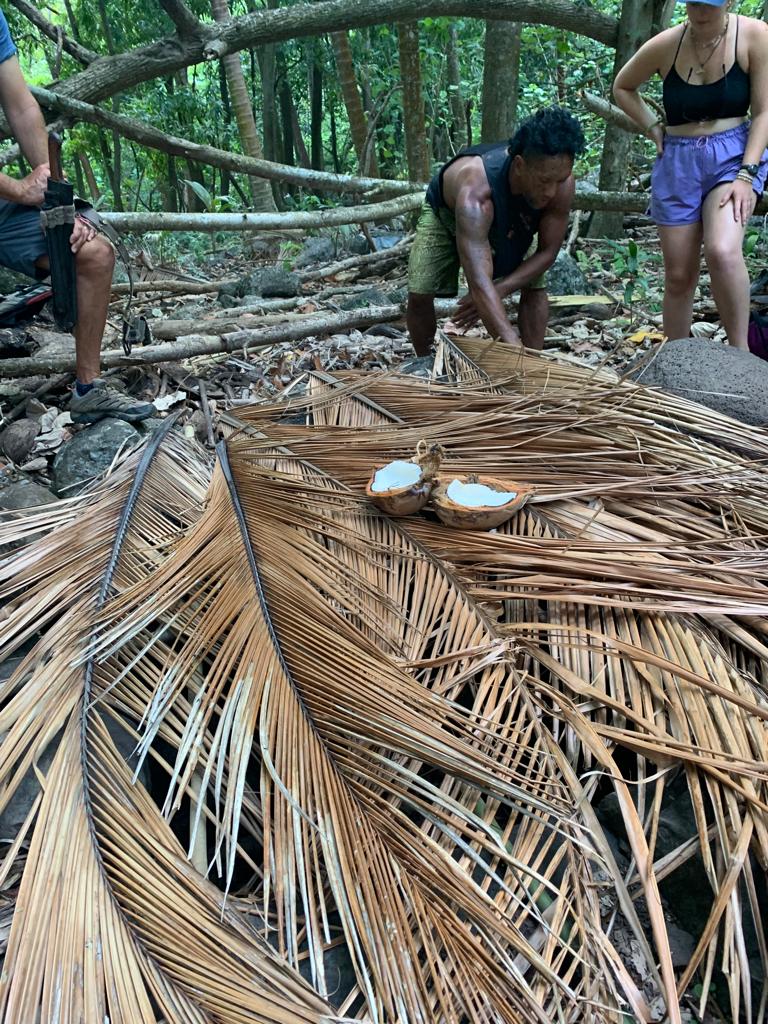 Teiki showing how to build a trap for wild pigs

Alex here. Finally arrived in the Marquesas after a seven day passage! It was about 800 nautical miles of sailing on the open ocean. A lot of it was motor sailing directly into the wind. We had a great first day in Nuku Hiva.

When I first stepped onto the deck this morning the steep towering terrain of the island stood high on the horizon, and we were quite close to it. As I had gone to sleep when we were still sailing with no land in sight, it was disorienting. The island was much more arid than other places we have been to, and it was great to see so much land after previously coming from a low lying atoll and lots of open sea. The big event of the day was a guided hike in the mountains. Twenty six of us took trips in life rafts to get to shore. 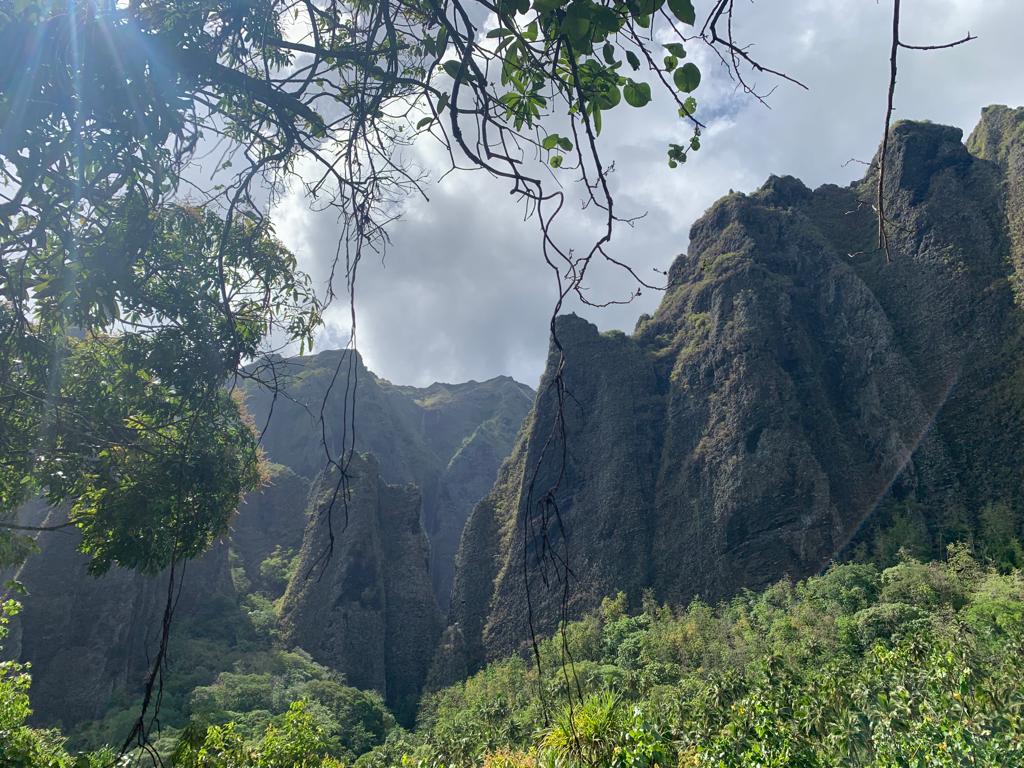 We had to get off into the water which came up just above my knees, and then walk up to the beach. I thought it was a really cool way to arrive to a place. We were greeted by several people who lived on the land there, it was a remote beach, and only ten people living in that spot. They took us through some yards where relatives lived and showed us many of the plants they had growing there. There were mangos, limes, bananas, coconuts, and much more. Teiki, the leader of our hike picked about a dozen pamplemousse for us to take with us on the hike to have later.

I put three in my backpack and it became pretty heavy. The animals around also made an impression on us; there were horses, pigs and dogs. They were super cute. The hike was really pretty. As we hiked deeper into the valley it didn't seem very arid, just a bit dry here and there. Slopes of rock and towers of stone surrounded us. About halfway up a vertical rock slope on a mountain was a marked spot which we were told was a burial site: a small cave where climbers brought the bones of the dead. We crossed a couple streams and the water felt cool and refreshing on our feet. Frankie and Jack went swimming.

We stopped to eat the sandwiches we had packed and lots of pamplemousse at a place with a panoramic view of the landscape. Then we hiked for a while more. We passed stone walls, platforms, various archaeological sites as we went. We arrived at a pit in the ground lined with stones, it was maybe six or seven feet deep. It was a pig trap, where Teiki showed us how to set it up. He covered it with sticks and palm leaves, and then cracked a coconut in half and tied it to the middle of the trap. It was all set up to catch a pig. He told us that it wouldn't take any longer than four days, since they are plentiful.

He peeled some bark from one of the Purau branches he picked to weave into a rope, which he explained could be used to lasso a pig out once it had fallen in. They don't butcher the pigs in the pit, because the presence of blood would keep more pigs away in the future. The Purau bark was had an impressive strength. It's been cool to learn that there are so many uses for the plants here. We have also used Purau leaves to cover the umu when we were cooking in Fare Hape, and Josiane told me that the flowers are used for dye and medicine. At the end of the hike, on the way back, many people swam in a creek where we saw an eel. I went back to the boat on the first raft, but the others came back with pamplemousse, mango, and more fruits from the people in the valley. It was generous and kind of them, and pamplemousse is my favorite so it's been a treat.

Thanks for reading! Shout out to my mom and sisters I miss you.