A Hymn to the Sea 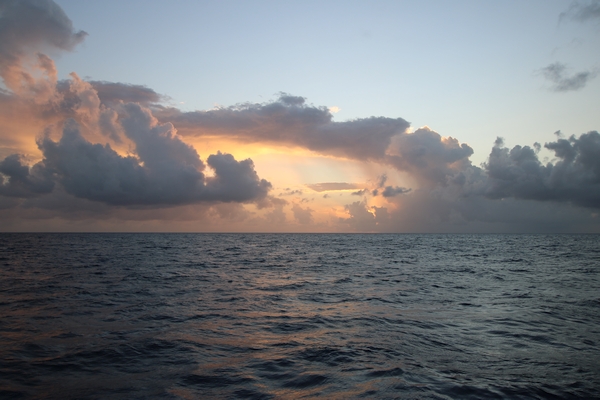 Location
Just Norwest the West tip of Jamaica, lights on the horizon.

Under a breath, the ship plods on like a question, asking the waves to move aside just enough for her to pass. She is a symphony of creaks and clacks, clanks and clicks and rings and the whoosh of sails as they go aback on every roll to port: secrets spoken to the silver, moonlit sea.

In memory: days rocking in a stack of heaping, angry swell sent from three different corners of the ocean, heaped upon itself by the currents sent round Haiti and Jamaica as if the islands - squat, toad-like masses of land at the horizon - were testing our endurance and our inner ears with their seas, gazing upon us from their mountain-caps and challenging us to pass.

Our motion, wild and uncomfortable at every angle, sent the ship rolling in unpredictable ways, casting pots across the galley and food across the tables and imperiling the colorful row of coffee mugs for the on watch that always sits on the wheelbox.

In the moment: a gentle, following sea. Rhythmic, like the ocean's breath.

Shallow, never more than a few feet of gentle rise and then fall, every once and a while a playful wave that picked up the stern and said, "Look this way." The sea had calmed and wanted to play, she wanted company, she wanted to talk to the ship and her crew. This she did in the gentle murmurs of waves parted at the bow, too loud to be a whisper and too soft to be spoken aloud. The ship answered with her own sounds and smells and the soft purr of her generator. Standing at the bow, I felt as if a bystander, unsolicited, an unintentional eavesdropper on the conversation between ship and sea but, try as I might, I couldn't tear myself away.

The moon cast the night into a silver day, the clouds not their usual absence-of-stars, rather silver pillars of thought, heads bent in prayer upon their way: pilgrims in the sky, their faces etched with the whorls and swirls and puffs and pocks of wisdom. The brightest stars shone on, defiant, loving, caressing the moon, cupped by the clouds, asking us to look up and see where we were. There was the mother bear, her son following behind, his tail pointing to North. There was Orion, the hunter, arrow drawing, bow outstretched, eyes fixed on his horizon, searching for his quarry in the sky, Sirius following lovingly behind, head raised, nose in the air. There was Corvus, a crow the color of night thirsty for the sacred knowledge, pleading the serpent for just a taste.

She, the moon, cast a silver wake upon the sea, where from it turned a midnight blue to a dappled sheen of light, shadows on the waves passing in procession across it: like an overexposed film of a city sidewalk during rush hour.

To my own moonlight: I love and miss you. I see you in the silver clouds and the dancing sea.

There are too many colors in a sunset, when the sun decides to go to sleep and, in shedding the hot, beating, sweaty clothes of the day, his skin casts fire across the world. How do I describe them all? The sea, to the east, a midnight sheen of black - the roughened, scaly skin of a sleeping gator. To the west, the black meets a rim of golden light - like candles at an altar - and then white, and then a million shades of blue and a trail of red in the sea as if the sun's light had spilt in it. The clouds - the tail of Jamaica - piled upon themselves, an anvil to the South the color of old iron, spilling rain across the horizon, his arms cast in gold and reaching towards the sun as if to grab him, to catch his light, and so it does. The cloud, engulfed in gold and rose and orange-peel, ochre and steel , in ecstasy, weeps a curtain of rain the curves through the air like a feather and never reaches the earth. A hymn to the sky. The sky: a reflection of the sun beneath the clouds, yellow fading to red and then grey and blue and black, above them white and then violet, basalt, obsidian, and the twilight of purple that marks the precession of stars. Sirius, shining green in the sky.

At night, underway, on a broad reach, port tack. The jib, dirty-white, full, bellied, sated with wind, a beautiful shape. It speaks the sea, the toss of waves beneath the stem echoed off its outstretched surface and to the watcher at bow, whispering the rushing, tumbling, dipping, leaping secrets of the waves, hinting unseen things in the deep, inviting you to look over the bow and watch the bioluminescence tumble over itself. Behind you, a cloud carefully cups the tail of Scorpio, as if to lift him up and display his brilliance. Antares, warm and red, humble and comforting.