A Melting Pot of History and Culture 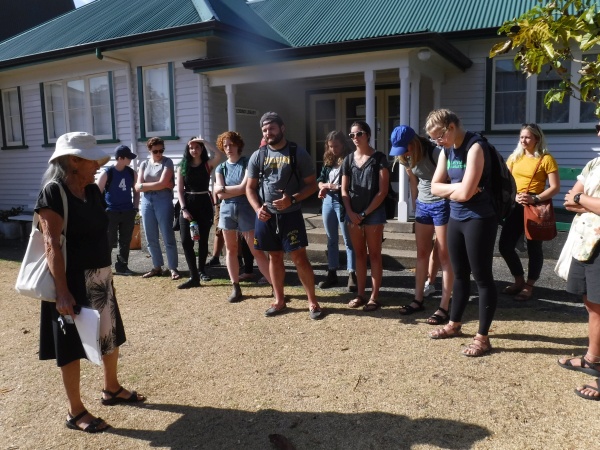 Learning about Kororareka Russell History from Heather, one our tour guides and a curator at the Russell Museum 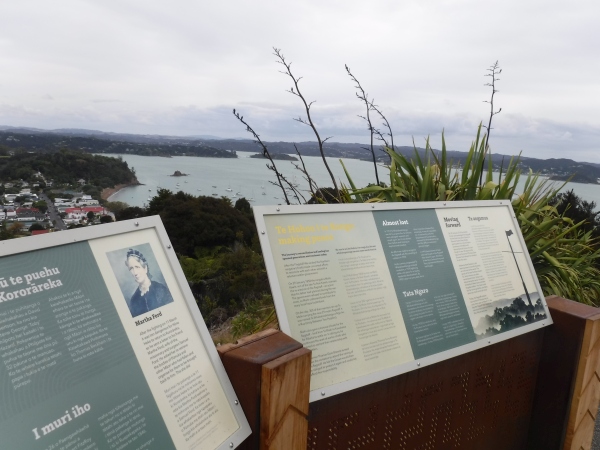 The view from Maiki Hill: in the foreground are the new interpretative signs that tell more of the Māori perspective of Hone Heke's felling of the flagpole, while in the background is Kororareka Bay, where the (tiny) Robert C. Seamans is anchored

Every place, whether a city in New Zealand or the average grocery store, has its own unique culture, notable features, and general vibe. One of the many aspects that made me so drawn to SEA Semester was that it allowed us to visit and experience many different cities and regions of one country. Kororareka Russell (the first part is the original Māori name), a smaller town in the Bay of Islands, is a historical location for 19th-century whaling, the signing of the Treaty of Waitangi, and earliest interactions between the Māori and European settlers. To give a comparison to the United States, it has the historical importance of Washington D.C. but the recreational opportunities of Hawaii. With such a range of value, history, and culture, Russell is unique in the way it combines history and nature.

On our first day in Russell, a group of us hiked up to a flag pole at the sight where Hono Heke, a Māori chief who had signed the Treaty of Waitangi a few years earlier, directed the cutting down the British flagpole four times. Despite signing onto The Treaty, after realizing that he and other Māori were neither getting what they were promised nor benefitting from it, he repeatedly cut down the flagpole out of protest. While many tourists visit the pole for the historical significance, the pole itself is placed on top of a hill with 180 degree views of the Bay of Islands and 180 degree views of dense jungle with countless shades of vibrant green. After visiting the flag pole, we hiked along a marked path through dense trees and jungle down to Sandy Beach. While the ability of Russell to create an area that seamlessly combines recreation with history and culture is largely due to the landscape itself, the decision to do so was unique and brilliant. For those of us who did the hike, we were very excited to enjoy the two aspects simultaneously.

We were then pleasantly surprised to find a similar occurrence the next day on our visit to the Waitangi Treaty Grounds. The architecturally modern museum sits next to a main road in Pahia, a town across the bay from Russell. However, when you come out of the entrance area, you are standing on a wooden bridge among a variety of trees and greenery. Similar to the flag pole in Russell, while the focus of the museum is the Treaty signing grounds, Māori cultural performances, and the museum exhibition, it is impossible to not acknowledge the landscape as well. However, what is so unique about this area is that the display of recreation/landscape and history is always balanced, rather than one overpowering the other. This is a testament to the equal importance of the two aspects to what makes those areas what they are as well as tourism.

Today, we found the same scenario during our visit to the Russell Museum, a museum focusing on Kororareka Russell history featuring many artifacts, a whaling boat, and photographs connecting past culture to the current culture of Russell. In addition to visiting the museum, we walked around a graveyard where many historically relevant figures from the 19th-century whaling and Māori-settler interactions are buried. Finally, our last visit before lunch and returning to the Robert C. Seamans was to the oldest functioning church in New Zealand. While small, the church which had just finished its Sunday Service had beautiful stained glass windows, pew cushions with images relevant to the history of Russell, and both English and Māori versions of the Bible and other messages. Such aspects represented the efforts of Russell to acknowledge their history and Māori people, rather than only featuring the European narratives.

After a successful port stop in Kororareka Russell, filled with learning, amazing views, and lots of ice cream, we got back underway this afternoon. It is now time to remind ourselves not to lean on the gimbaled tables and to brace ourselves in case of a swell. As we head to Great Barrier Island, many of us are excited to be back at sea for a longer period of time with the prospects of experiencing an entirely new place ahead!