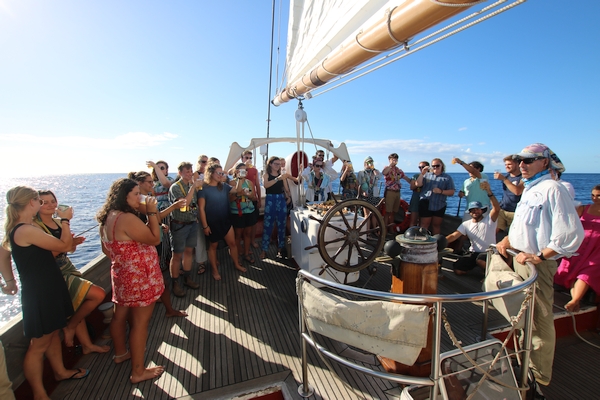 A toast to open our journal gallery, thanks Peter Stone for your sage guidance.

Ship’s Heading, Speed and Sail Plan
7 nm WNW of Guadalupe, currently we are heave to on a port tack, under backed jib, stays’ls and full mains’l, making 0.5 kts 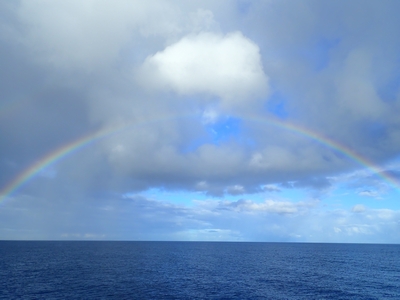 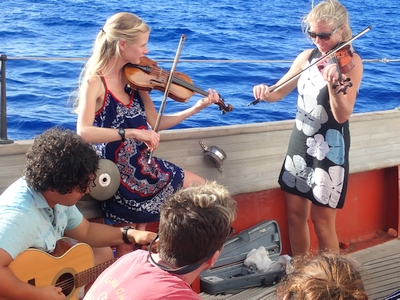 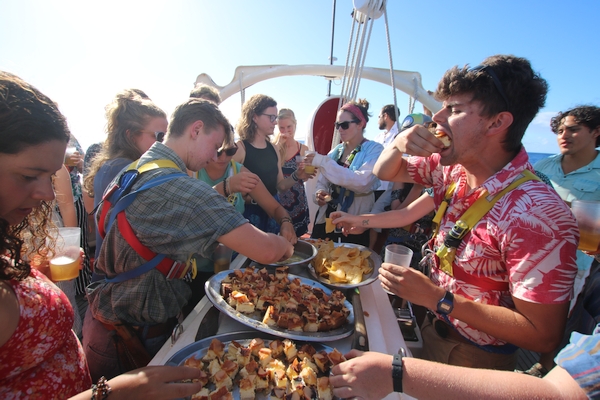 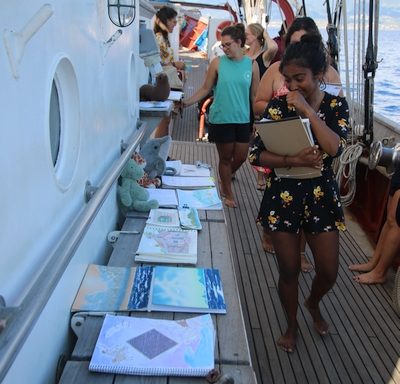 Two nights ago I did not sleep well. Around 0230, I first awoke to the sound of the port jib sheet winch being cranked away on, we were gybing. I could feel the heel of the boat increase and then I heard light rain hit the deck. I lay there thinking about our arrival to Dominica and the excitement of coming up on deck in a few hours and seeing land, smelling land, hearing land. However, I did not manage to fall asleep, instead, I was awake and continued to listen to the sound of the waves move past the hull. I looked out my porthole and I could see the lights along Dominica's coastline. I started thinking about the responsibilities of preparing the boat for our soon to be anchorage. I had already prepped the students in C watch the night before and asked them to make a list of all the tasks we would need to complete on the following morning watch.

Local time 0400. I let my mind wonder and was looking forward to two days off in a row on the island! I had been wanting to meet the local people of the Kalinago tribe since hearing about them the last time I visited Dominica. On my second day off, I was planning on relaxing at a local hot springs. I sat up in my bunk and quickly got distracted by the smell of coffee. "Ok. I'll get up." I made my own brew of strong coffee, one of the luxuries I treat myself to when working on boats, and went on deck. Daylight was breaking, low cumulous clouds hung over the island. I felt a bit of cool wind from the NE and watched whitecaps appear off the starboard beam. I had nearly an hour until our watch would relieve the deck. I walked aft to the quarterdeck and was greeted by Kevo, the Chief Mate.

"We've picked up a net last night. It's wrapped around the rudder. And that starboard jib sheet winch is out of commission until we fix it."

I thought to myself, "Mmmm, could be a full morning."

The breakfast bell rang and I went below to eat. There was an excitement in the main salon amongst the students and crew. We were coming into port. Breakfast finished and our watch all gathered on the high side, harnesses on, ready to stand watch. I told them, "Ok C Watch. Adaptability is the word of the day. We will have much to do, stay open to it."

Then, Captain Taylor stepped out from the Charthouse and relayed that we would have an all hands muster on the quarterdeck at 0720. She said to carry on this course, until we were in the lee of the land where we would heave to and sort out the net. The winds were light, the sun was just starting to brighten the day and a local skiff motored up alongside the Cramer to welcome us to Dominica and offer his services. The bell was rung at 0710 and all hands began to emerge from below decks and gather. When all were accounted for, Captain Taylor announced that we would not be anchoring in Dominica, instead, we were to spend the next 10 days at sea.

A change in plans.

There is much order and routine on a boat. If not, there would be mere chaos. At this stage, during week 4 of the program, the students and crew are in a rhythm. We have found a rhythm, even with the previous port stops and time spent on land that can change this flow that we learn and live at sea. After the unexpected news yesterday morning and the initial disappointment for some that we would not be visiting the island, I noticed a shift in the student body as a whole. By the afternoon, as we sailed along beautifully on a broad reach, past the sun-kissed Les Saintes, the morale on whole was high. It takes a unique group of people, living together, to continue to have a positive outlook on their current situation after much planning and anticipated expectations have not been met.

Secretly, I was elated about the news and happy to spend more time at sea. From past experiences, I have witnessed that the magic happens out here, on the water. Perhaps I was awake at 0230 because I sensed a change in the air. Or perhaps because I am a very light sleeper and every time someone is coiling a line near the port jib winch or we are about to deploy the wire or I hear, "Galley, stand by to gybe," I wake up because this is all happening a few feet above my head. Whatever the reason, once again, I am reminded, that one of the large reasons why I am so drawn to the sea and continue to live and work on boats, is because of the unexpected. The routines, the order, the continuity of our days at sea are set in place out of necessity, but it is the ability to stay open to change and make the most from what one has that is significant. I hope these students will remember this from their time onboard the Cramer.