A small boat sailed to the big mat of Sargassum 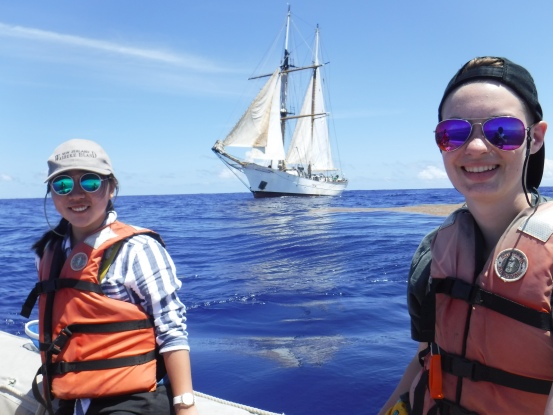 Cecilia and Jane in the small boat, sampling a Sargassum mat.

Today we decided to approach another big mat of Sargassum and take some samples from it using our small boat. Mats of Sargassum are very rare to see. For example, our Captain Jason has sailed this cruise track north six times while it’s the first time to really encounter such large mats of Sargassum with such consistency.

I proposed to jump on that small boat because I knew it would be a very rare and exciting experience, and it was truly of huge fun from start to the end! Getting on a small inflated boat can be scary at first, but it turned to be so exciting as it started to move fast in the waves. Our driver Grayson seemed to be so proficient in steering the small motor-driven boat. I enjoyed the excitement you might get from an amusement park during our way to the big mat, and in a minute we arrived there. We could tell that most of the Sargassum mat was made of Sargassum natans I, one of several unique morphological forms of Sargassum found throughout the Sargasso Sea and Tropical Atlantic. 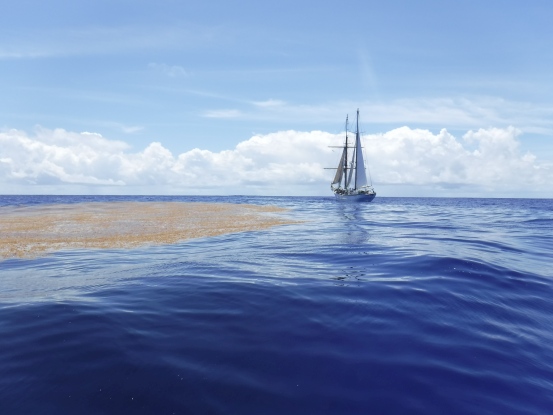 Cecilia and I collected samples from the big mat. We will later examine genetic differences of Sargassum forms, including the dominant form of this special aggregation. In this Sargassum mat, we also sampled an endemic shrimp, Latreutes fucorm, which inhabits pelagic Sargassum. This shrimp has been shown to be susceptible to an isopod parasite which burrows beneath the shrimp’s carapace, and is clearly visible as a large lump in its shell. During the processing of Sargassum later I found the rate of parasitism of the shrimp living in that mats appeared to be relatively high: 11 parasitized shrimp out of 51 shrimp in total. Encountering a mat of Sargassum provides a special set of data for our research projects.

It’s also sad to mention that we found a fair amount of plastic debris in this aggregation of Sargassum. For example, Cecilia picked put a big chunk of plastic that might be a part of a bucket, and we picked up a single-used spoon. Oh, I hate single-used utensils, and all the plastic trash that ends up into the ocean. I was also reminded of a video I saw about a sea turtle getting a part of straw in its nose; the miserable mourning it made when the straw was taken out was just heart-breaking. The plastic aggregating in the ocean is not just a legend.

We are glad that we took some great photos from the boat. Gabe, our MBC lab hand, took several good photos of the Cramer—she was incredibly small in the giant ocean. It’s crazy to think that over 30 people are living aboard the Cramer for one month, performing daily activities and science. I also took a photo of Gabe smiling with the big mat of Sargassum and Cramer behind him. As lab hand, Gabe is helping to collect Sargassum-associated mobile fauna while wielding a heavy dip net every day.

Though we are accompanied by the amazing views of the ocean, the sky and clouds, and sunrise and sunset through the journey, today is definitely a memorable day.