A Visit to Paradise 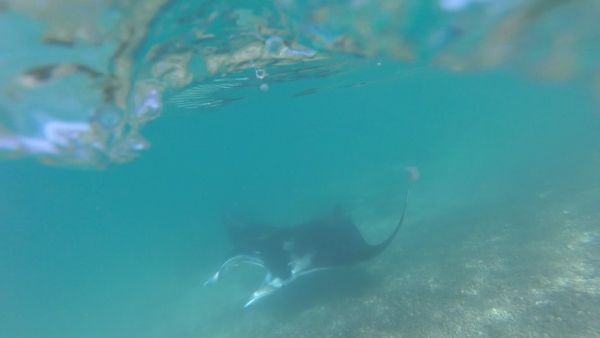 Manta Ray at the beach.

Kanton was the paradise you always read about as a kid, and leaving this beautiful atoll is like a snap back into reality, one that is going to be relatively hard to make. The plethora of wildlife alone was absolutely breathtaking. Since arriving on Thursday, I have seen about twelve sharks, (a mixture of grey and black-tip reef sharks), two manta rays, a peppered eel feeding frenzy, an octopus just chilling by the surface of the water, a sea turtle (not sure of the species yet), hundreds of fish, ranging from huge humphead wrasse to super small, colorful damselfish, and more coral than you could imagine. In every snorkel trip so far, wherever you looked, there was a spectacular array of coral. One thing is for sure, I am going to buy a GoPro when I get back. Often times, photos cannot do this place justice, but after seeing the videos and pictures my other shipmates have gotten with their GoPros, they come pretty darn close.

Every time I hop into the water, I see something new, from dazzling coral structures to a passing marine organism. I’d have to say, my most memorable encounter so far would have to be the two manta rays. It all happened on Friday afternoon, when a group of us went to a nearby beach after lunch. We spent the first of three hours on a wilderness trek, hiking over piles of dead, sunbaked coral pieces, and looking at the rusty ruins of items long forgotten by the US government. When sweating got too much for us, we headed back to the beach and that’s where the chaos started.

We got back to the beach, rehydrated and reapplied our sunscreen layers. Becca, the chief mate, was heading to the water to check out the current, and called back to us about seeing rays. I had seen string rays before so I didn’t immediately react, but literally, as soon as the words “Manta Rays” escaped her mouth, I sprinted to the beach with my snorkel gear in hand. I needed to see these manta rays. That thought was racing through my head as I absentmindedly ditched my mask and fins and ran straight into the water. Only when I was a little past waist deep did I realize my mistake: I cannot see underwater. I called back to Adam, who was the closest to my mask, and thankfully, he tossed them to me and I set off after the manta rays. Becca and I were the only ones in the water, and we had it in our heads that we could easily catch up to the rays. We were mistaken.

Everyone else was on the beach, running after the rays and calling out their whereabouts to us. Swimming furiously, as I didn’t have fins, I tried to look for the rays but I couldn’t see anything. I just kept swimming and scanning the increasingly murky water. After a few more seconds, I finally had the better judgment to get out of the water and just run to where the rays were last seen. As soon as I caught up, I ran straight into the water again and I finally saw them. About five feet away from me were the two manta rays, each about four to five feet long. I saw the black fin of one as it dove down and then saw the mouth and underside of the other as it too dove down into the murky depths. Henry, our policy instructor, threw me his GoPro from the shore, but when I grabbed it and secured it around my wrist, the manta rays had already disappeared. Seeing manta rays up close in the wild has always been a dream of mine and now that image of the two rays disappearing into the murk will live on in my memory. Best beach day ever.

Tonight, we ended our stay in Kanton with a ceremony and celebration of our visit. This boat is one of two boats that visit the island each year, so having visitors is really special to the people of Kanton. As part of their tradition and culture, they arranged the festival and all through the night, we shared songs, performances and food. We took turns performing for one another. The shipmates and crew would sing a few songs, and then the children of Kanton would sing or perform a skit, and even the adults would perform traditional dances. Everything was amazing, from the absolutely adorable children to the delicious food. None of us wanted the night to end, but as with all good things, it ended too soon. Tomorrow, we set sail for Orona, another atoll in PIPA. I’m really sad to leave Kanton, but the atoll and the people will always have a place in my heart.

A quick shout out to my family, miss you all and I love you so much! I hope you all are having a great summer and I hope Philadelphia is treating you well so far, Katherine! Jennifer, I wish you could see these stars, they rival the view we had in Minnesota. Sending you lots of hugs, Mom and Dad. Oh, give a big hug to Cooper for me! I promise to write in the blog again soon!