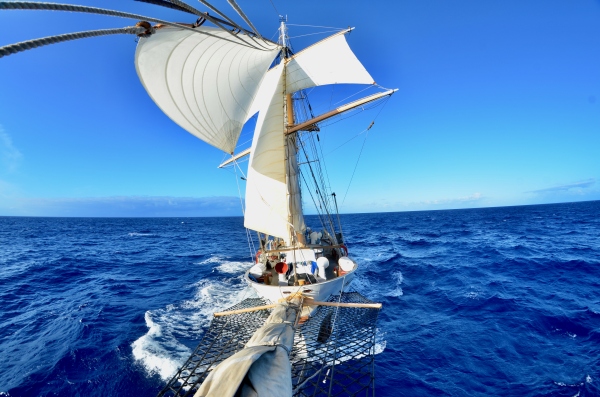 Weather / Sail Plan
Sailing under the four lowers (reefed mainsail, main stays’l, forestays’l, and jib), the course and the tops’l; Winds Force 4-5 from the Northeast

Trade winds, alas! After almost a week of motorsailing on and off the winds have finally filled in and we’ve turned the engine off (for now at least…the doldrums await us). The wind has been steadily blowing anywhere from 15 to 25 knots and the 4ft swell has been rolling us around pretty good.

The fun part about the trade winds hasn’t just been getting to turn off the engine, but also watching as water bottles, books, and people take a little tumble when we take a big roll. Trade winds also mean that more and more of our time on watch is spent sail handling. Today on morning watch (0700-1300) we struck (took in) two of our squares’ls- the course and the tops’l. Unlike a triangular sail that’s controlled by a halyard, downhaul, and sheet, the squares’ls have the added components of tacks, inhauls, outhauls, and brailles. You haul on all these lines and then the real work awaits: coiling back up every line you just touched. No line spaghetti on the deck!! Luckily we’ve been getting much faster at adjusting sails and our chief mate Christine no longer looks like she’s chasing around a gaggle of toddlers.

In moments of downtime on watch today we took out the sextants and shot the sun so that we can work out some sunlines to go on the chart. Captain Sean and I did it at the same time and I was overjoyed when we came away with the same angle on our sextants. We’re all still getting the hang of using the sextants and the rolling of the ship isn’t making it super easy either, so it was reassuring to come away with some sense that I had done it right.

As with the sextants, there is an overall feeling of being in a place that lingers precariously between comfort and unfamiliarity. There is a stringent routine to each day, oftentimes orchestrated down to the minute, and yet every day is so wildly different. There is always a new situation that you’re learning to respond to or some object that you’ve been told to grab and you don’t even know what it is, nevermind where to find it. On top of it, the 18hr rotation of the days is oftentimes disorienting and makes it nearly impossible (especially in conversation) to have a solid “yesterday” or “tomorrow” to reference.

The lines between day and night are so blurred that each day just rolls into the next. That being said, there is something special about the reference of day and night being irrelevant; I have been taking in my time on the ship not as a series of days, but as a one long, cohesive experience. You take things as they come and although some watches are certainly harder than others, there is no sense that a “day” has been “good” or “bad” per se. It is all one day just interrupted by naps. And yet, there is also a simplicity to life on the ship; you sleep, tend the ship and change her sails, sit together and share a meal, and read or play a game of cards. At the end of watch, rushing away to a meal, you leave the deck with a sense of accomplishment and know that at the table you’re to be met by a community there to support you. It’s hard work but a simple life.

To Mom, Dad, Toby and Sophie: I love you all dearly and I’ll see you on Christmas <3