An Ode to our Uninvited Guests 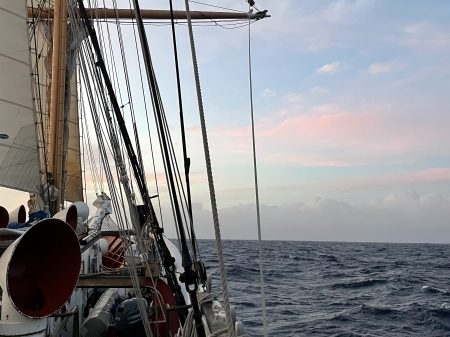 Loyal followers of our blog already know that, for almost two weeks now, our dear ship has played host to a small colony of charismatic seabird: the booby. The first booby sighting was met with delight: after all, we’ve had surprisingly little company from the sea’s inhabitants. On day two of life with the birds, a booby nose-dived those of us at the helm during dawn watch and had to be coaxed off the ship with a boat hook. This story was lucrative currency at the breakfast table that morning, told with generous embellishment to envious shipmates who had yet to see one of these darting seabirds themselves. On day three, one booby had become three, a small family that settled on our upper yard. By midday, the first of us had received a gift-a dropping, “what luck!,” we exclaimed-but by day’s end five of us were recipients of that loathsome white splat.

By now, a glance skyward will reveal six to eight boobies perched aloft, preening their feathers, taking naps, and bobbing seemingly unbothered by the roll of the ship and the bounce of our lines under their webbed feet. They face into the wind and take flight to surveil for flying fish that launch from our wake. They sleep, they squabble, they eat. And they poop: frequently, voluminously, prolifically. No surface forward of the quarterdeck is safe from their droppings; as soon as we scrub it off, the boobies send more. Hanging laundry is a hazard undertaken at one’s own risk, as is simply venturing to the foredeck for a boat check. The booby, once heralded, has now become a common enemy. They mock us from aloft, pooping freely, without regard to our welfare below. On a recent fire drill we pointed the firehose to them; not only were they undisturbed, one even flew through the spray for a free bath. While most aboard shake their fists aloft and pray for their departure, I for one have to say that I have grown to love them. Indeed, I write to you today, dear Reader, in defense of the booby.

Boobies are pelagic (open ocean) birds, a smaller but close relative of pelicans. Several species of booby are endemic to our corner of the Pacific here; we specifically have been visited by three: brown, masked, and red- footed boobies. They spend most of their lives at sea, enjoying high prestige free of predators. They migrate annually to land to nest, where adults and their eggs are susceptible to predation-especially from invasive island inhabitants like cats, rats, and pigs-as well as resource depletion and climatic disturbances. Boobies frequently mate for years or life and may live up to 25 years. Though not currently threatened at the population level, boobies are sensitive to changes in heat, vegetation, and water quality, and are just one of many species hanging in the fragile balance in our oceans amidst widespread climate change and pollution.

With almost two weeks now to observe our visitors, any one of the ship’s company could write a field guide to their behavior. In flight, the boobies have several distinctive tail-feather-shakes and contortions: what looks like a midair full-body convulsion is in service of drying and preening their feathers. They dive abruptly and vertically, snatching unsuspecting flying fish from the crest of a wave. Despite the predominating air of resentment aboard, we can’t help but root for their hunting success: “Oh, oh, he got one!” is a frequent exclamation and interruption on deck as all eyes turn seaward to see a booby nonchalantly tossing a fish down its beak. From flight, they awkwardly try to settle back into the rigging, tail feathers and webbed feet splayed out. They usually miss the landing, at least once. They shove each other around, occasionally bickering, but mostly tolerating the presence of the others from an agreeable distance. Even the most heart-hardened booby-hater among us has to admit that they provide first-class entertainment.

There’s no saying how long our booby friends will keep us company-they may very well be hitching a ride all the way to Hawai’i. And while I miss the ability to lounge on the bow without a care to the horrors dropping from above, I will miss more the pleasures of their quirky company if they do leave us. One can only blame them so much for following nature’s call (and can blame them even less for having a vendetta against humans: I mean, really, with a name like that). In our bubble of 34, isolated from an already-isolating, pandemic world, the boobies are comic relief to the monotony of life at sea, a window into the natural world that few get to witness, and a reminder that sometimes, in life, well-shit happens.