Katherine H. Webber, B Watch, The University of Virginia 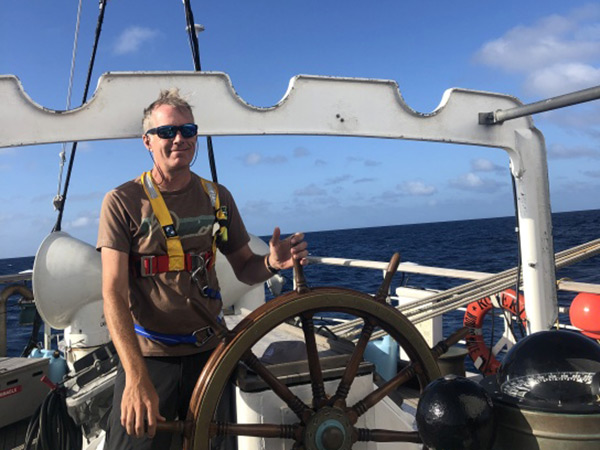 “Two turns right!” I call out. Grabbing the top spoke of the helm, I rotate the wheel, my hand moving from my shoulders to my ankles to my shoulders and then to my ankles one more time and then the turns are complete, each movement more difficult than the next.

“Two two zero,” I say, reading out our new heading.

I pause, watching the compass spin to the left.

The rest of my watched stands by at the main sheet.

The wind is the only sound.

I feel the wind shift, moving across the quarterdeck towards the stern.

“Haul away!” my rest of my watch responds, before the whirring of the winch breaks the silence. The boom swings over my head and the sound of sails and lines under tension fills my ears.

“Helm to midships!” I respond, returning the rudder angle to zero.

From my vantage point, I notice the stays’ls move from the starboard to the port side of the ship, completing the gybe. I smile. Another successful gybe from B watch with me at the helm!

Being at the helm is not always this exciting. Most of the time, it consists of a constant battle to keep the ship on the right course. This requires patience, intuition, and a gentle hand, as the ship’s response to the rotations of the wheel are delayed. A little goes a long way at the helm, and you only need to move a few spokes to get a large response from the ship. Thus you move little by little, waiting and feeling out if and when she needs more of a nudge in the right direction.

My favorite time to be at the helm is at night, when the sky is clear and splattered with stars. Then, you can use the stars, rather than the compass, to determine whether you are on course or not. In this way, you are not only merging and connecting yourself to the ship, but also to the sky itself, working in a careful union to get to your next destination.

The stars twinkle and the ends of the yards bounce among them, falling left, right, up, down in a constant dance. Maybe check the compass, but maybe don’t. The stars are telling you what you need to know, before they spin off again, into the endless horizon.