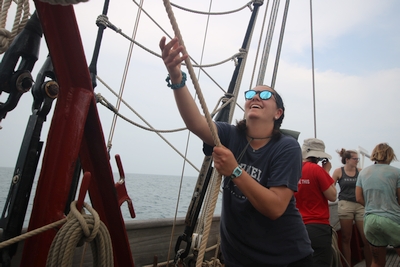 Izzy easing the mainstays’l after a jibe during class.

Description of location
Today we sailed by the Rookery Bay, just south of Naples, FL. There is over 70,000 aquatic acres of marine protected area, which are mostly mangrove forests along the coast. We never got to see the mangroves, but Jeff explained how they are fish nurseries, protect against coastal erosion, and are important for nutrient filtration of the intertidal ecosystem. We never saw the mangroves though because the SSV Corwith Cramer draw about 3 meters (~9 feet), and we were in around 10 meters at the shallowest.

Today was also my birthday! Which I forgot about until Jordan reminded me around 0930, which was about two hours into morning watch. We celebrate birthdays on the ship at class time, where everyone sings, than Katey

and Will bring out a delicious snack (today it was pie!) that everyone eats on deck. 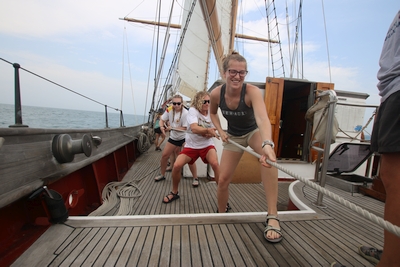 Kayla, Alex, and Emma pulling in the mainsail to get ready for a controlled jibe

After chores were done around 0830, I started working in the lab group where we deployed a shipek grab, a hydrophone, a secchi disk, a hydrocast, a conductivity temperature density (CTD) profiler, and towed the Neuston Net. The shipek grab is a heavy spring-loaded tool that we deploy from the wire off the port side of the Cramer. When the shipek hits the bottom, a weight drops, which releases the half cylinder scoop that traps ocean floor sediment. I had to be careful to keep my hands clear of the bottom of the shipek grab once it was loaded, but at 0940 we safely deployed it. My role was

one of the two dancers, so I got to guide the shipek grab away from the hull of the boat and call out commands to my other teammates who worked the wire speed and the J-frame. 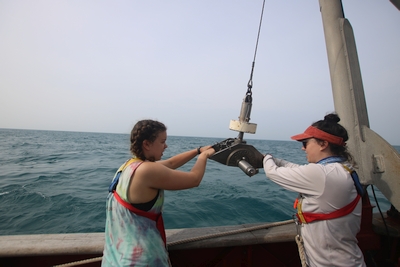 Fiona (author) and Corinna (science mate), guide the shipek grab down towards the water without hitting the hull of the boat.

The shipek deployment is a little different from other tools because it needs to hit the bottom at a certain speed so that weight drops and releases the half-cylinder scoop. The first time it hit the bottom there wasn’t a big enough impact and the spring was still loaded, so we had to try a second time. The second time the shipek came up with a full scoop of sediment, along with a small shrimp and an unlucky brittle star. Along with the few live organisms, there were lots of full shells, and the sand itself looked like it was mostly carbonate. This is very different from the predominantly quartz-grain sandy beaches of Cape Cod.

Shout out to the CC geology department and my family, especially my dad, uncle, and grandfather who passed away in March 2020 who always encouraged my love of sailing.