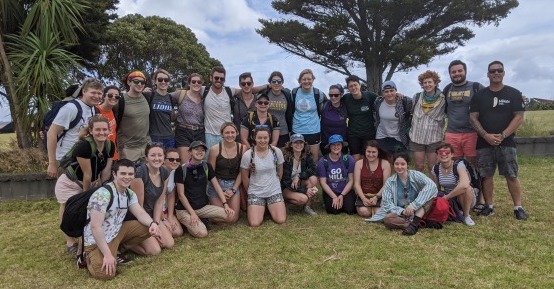 SEA Global Ocean students are guests on the land of the Ngati Whãtua Õrãkei, guided and welcomed by Dane, far right.

Overnight we started our first watches. A watch had evening watch, followed by hour-long dock watches divided up amongst us. These watches were used to continue our training on boat checks. Boat checks are extremely important because they allow us to catch any problems that should arise before they are a threat. Boats checks involve going throughout the Robert C. Seamans, ensuring that everything is in order. The most daunting part for most of us is crawling through the engine spaces to read and record engine, water, and fuel gauges. During the hour that each group was on watch, they completed one boat check as a watch. This took almost the whole hour, allowing just enough time left over to wake up the next watch. We will do these every hour while at sea, although only one person is needed and the process will get quicker and easier.

C watch was woken up at 6:20 for the first breakfast, followed by A and B at 6:40 for theirs. Breakfast was excellent, with Rosemary-cheese scones and Kiwi fruit. After breakfast we cleaned the Robert C. Seamans, including swabbing (washing) down the decks. During the rest of the morning we received more training on Neuston net deployments, watch standing, and rope handling. These are skills that we will get a lot of practice with in the coming weeks.

During the afternoon we headed to the marae of the Ngāti Whātua Ōrākei. This is located on Bastion point, within the city of Auckland. Once there we were met by Dane, a member of the iwi (tribe). He explained to us the history of his iwi, starting with the settlement canoes the people they are descended from. He told the story of how the iwi had come to own the land around Auckland through battle with another iwi. One of his ancestors [insert name], had gifted 3,000 acres to the British governor to build a settlement. Those 3,000 acres now contain the majority of downtown Auckland. The Ngati Whãtua suffered under the Pākehã (English, non-Māori) government, which built a sewer pipeline that destroyed their fishery, and later the New Zealand government evicted the iwi and burnt down their houses to make the area look better for the visit of Queen Elizabeth II. The loss of iwi and finally stopped after the Ngaāti Whātua occupied Bastion point against government possession in the 1970s. Eventually the land was turned back over to the iwi and it now remains a public green space within an otherwise populated area.

Monetarily, Dane explained, the iwi and wider Māori community are now doing quite well, with the Ngāti Whātua Ōrākei. having a net worth of 1.5 Billion with 5,000 members, half of whom are under 18. The iwi has set up programs to give their members cheaper housing, healthcare, and community. However, he said, Mãori continue to struggle with many problems. They have extremely high incarceration, suicide, and obesity rates. Government programs have tried and failed to fix the issues, but our tour guide was hopeful that Māori, not government driven programs, could help remedy these issues.

After our academic day was over, those who didn't have watch were able to continue exploring the city. A favorite thing to do for many of us was to get amazing gelato on the waterfront. We've had a great time in Auckland and are looking forward to setting out for the outer harbor tomorrow and then to the Bay of Islands.