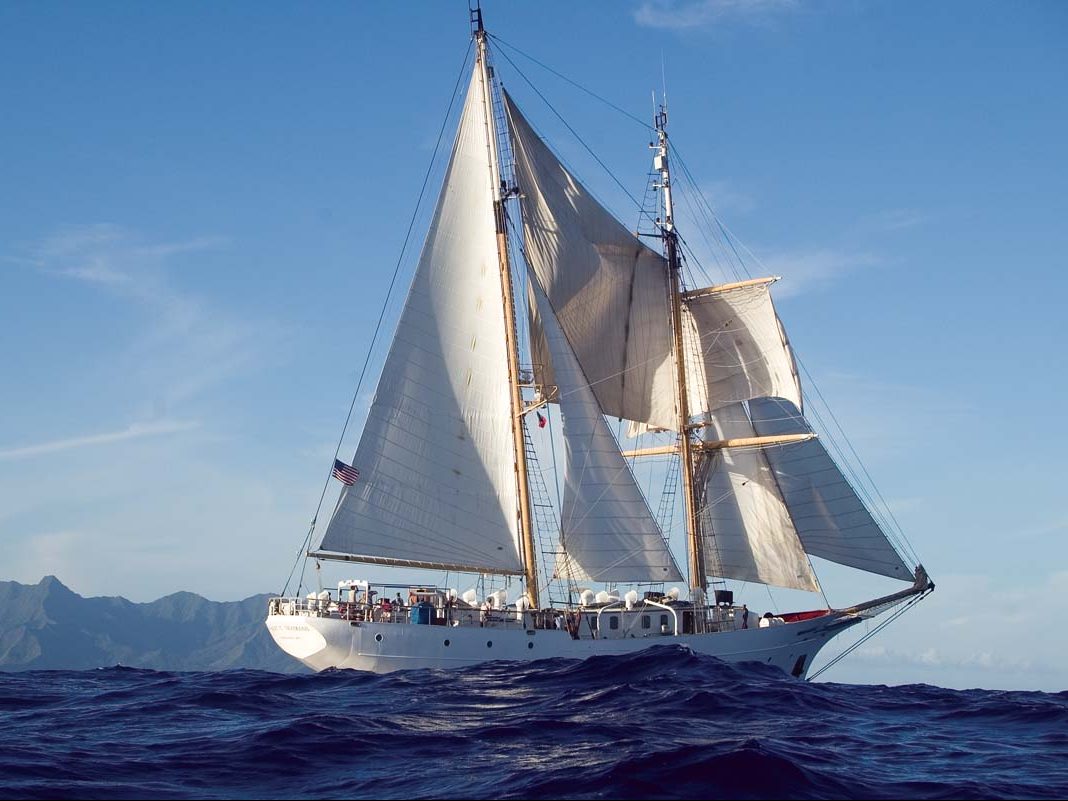 Winds/ Sail Plan
Force 5 from ENE/ Sailing under the main, the two stays’ls and the jib

When crew and students first met each other nearly 3 weeks ago in the harbor of Catalina, there was a jovial feeling in the air, as if we all recognized almost immediately the close community that we would become. We're bound by our love of the ocean, the absurdity of waking up at 1am, our mutual love/hate relationship with the boobies. That being said, there seems to be one force that binds us together more than any other: our communal love of hijinks and tomfoolery.

The first inkling of the power of collective tomfoolery began with a piece of celery. This piece of celery, peeled and nearly 3 inches long, just so happened to fit perfectly into a pocket in the back of one of our foulies.

For several days after this discovery the same piece of celery would circulate randomly through the pockets of our jackets and pants. The rules of the game were never spoken but the objective was to pass it on without notice and without word. There was no reward, no acknowledgement of having successfully passed it: the fun of it was all in the mystery.  However, these same rules also led to the celery tragically being lost.rumor has it that it still is in someone's pocket unnoticed.

No hijinks since have been as underground as the celery was, but there are a wide variety of jokes that play out daily with little understanding of their origins. For example, since sometime around the first week there has been a small toy dinosaur in the fo'c'sle head (bathroom). He moves daily without recognition of who has done it, and still nobody knows who brought him or placed him in the bathroom. Hand-drawn mistletoe appeared above many of the doorways in a similar fashion and we're now playing a version of Elf on the Shelf in the engine room. (I say a "version" of Elf on the Shelf because our haphazardly stitched together Wizard Bill is far cooler than any elf could ever be).

That being said, the time in which tomfoolery reaches its peak always seems to during class, the 1 hour a day in which we all come together. Each day we give a short series of reports on the navigation, weather and science happenings from the previous 24 hours. While the reports themselves are supposed to be succinct, they have become increasingly more elaborate and more bizarre as time has passed; yesterday our location was given in terms of how far away we were from France (~8000nm for anyone wondering), and every report is preceded by a little introduction song or chant. A class favorite has become doing "creature features" where we report on the anatomy and behavior of some creature we've encountered. The first creature feature was done on the ubiquitous copepod, and the second feature was on Jan Witting, our chief scientist. Subsequent creature features have been done on the masked boobies, our third scientist (Duncan), and the elusive red herring.

While the spirit of tomfoolery is one that is shared and embraced by everyone (except maybe the unlucky person who will find rotting celery in their pocket), there is a clear ringleader. A tomfool to rival Tom Sawyer himself, our chief scientist, Jan, has proved himself as a competent jokester since the very beginning. With every creature feature we do we are required to also create and submit a meme, and Jan has been known to raise his hand at the end of presentations and ask about where the meme is and if it's been submitted. He arrived to class sometime last week with a puzzling graph of what appeared to be the temperature and salinity curves of the current water mass; as we tried to piece together the bizarre trend lines he goes "Looks confusing, right? Yeah okay that's cause I made it up," and then promptly moved on.

However, Jan has a tell. He is fond of one mug in particular, a cutesy little mug with a pink mermaid and a tag line that reads "Can't: no legs," that he often totes around.  This mug seems to instill in him some extra sense of mischief for whenever it appears it's like he's workshopping a new Saturday Night Live monologue. Maybe it's because we haven't seen land in 3 weeks or maybe there's something in the air out here, but whatever the reasoning we seem to keep ourselves entertained. And to Jan who will inevitably deny but take joy in being the ringleader- of course you aren't; no legs.

P.S. Hi Mom and Dad! I miss you both so much! Please pet Sophie for me.
Toby- I hope you have a good finals season! Make Mom or Dad send you some candy on my behalf