Day in the Life of Tiff 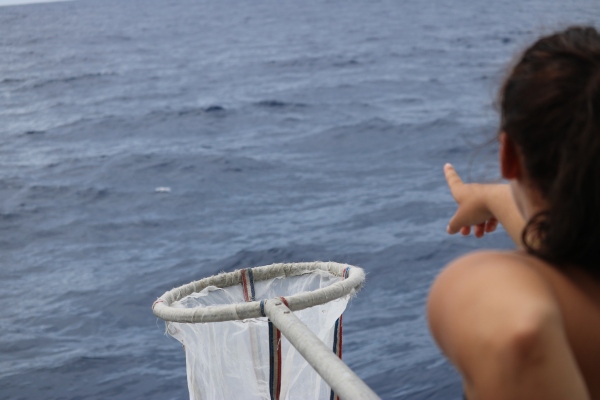 Trying to fish for trash

Weather
sunny, hot, and with NE trade winds and the North Equatorial Current trying to push us to the west, past our final destination, we must steer as close to the wind as able.

Highlights of my week are as follows: I solidified my commitment to getting an octopus tattoo when I held baby octopuses in my hand at Kiritimati Island, feeling as if they were my own children. Will I become the new crazy octopus lady rather than the crazy cat lady?

I came face to face with the most terrifying creature known to man...the eggplant. This was a few weeks ago, however given its monumental, life-changing experience, it is important to let the world know that while I am still deathly, irrationally, terrified of an eggplant, I was able to compose myself long enough to dice it to pieces and sauté it for lunch before it could overtake the ship.

Lastly, my fellow crew mates have realized the only way to deal with Tiff humor is by going along with it. Yesterday at dinner, I was asked to butter someone's biscuit (Mean Girls joke) and I spent the entire dinner buttering not only his, but every single person's biscuit. I am truly humbled and honored to be the official Butterer of the Biscuits.

Tomorrow I am Junior Watch Officer. Basically, that means I run the ship. I laugh. Let Tiff run the ship? Someone ate fish with high levels of mercury.

Rules are as follows: If anyone spots a piece of trash floating by in the ocean, we will quickly heave to. I will jump overboard and retrieve the debris. A whole new version of Dive Against Debris. Yesterday Jeff and I stood at the science deck, dip net in hand, ready to retrieve all the plastic that floated by. Unfortunately, we were too far out of reach. He would not let me jump in to retrieve it. Captain Pamela didn't feel like practicing a man overboard drill. That was the first time in my entire existence I saw trash in the ocean and did not pick it up. It broke me a little. So, as JWO, I will not let that happen again.

I am super bummed the ITCZ was blown the smithereens due to Tropical Storm Alleta, so I didn't get my thunderstorms. We also made it past not one but two cyclonic systems. I guess Neptune deemed us worthy to sail on for Hawaii.

I have had amazing conversations with the local copepods. I saw some friendly faces and even made new friends! Carl the Copepod says hello. He's such an artistic individual. Don't worry, talking to fish and plankton are quite the norm in the world of Tiff. I do not have narcosis.

Also, apparently scurvy is a real thing, not just something P!nk sang about on Spongebob Squarepants.

PS: I spent a dollar to send a text in Kirimati to make sure my cats were okay and they are in fact okay.