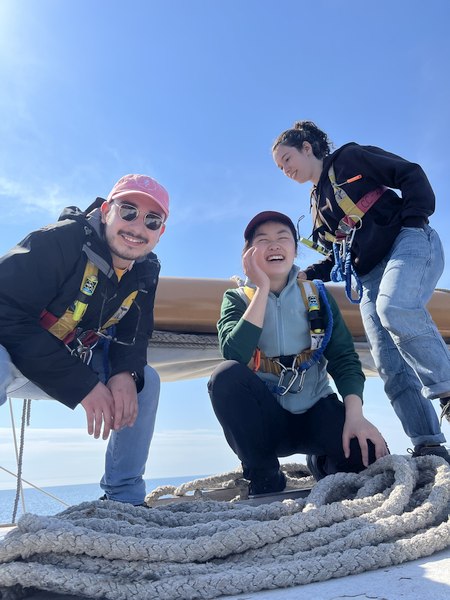 Notes from C Watch by Cristian

I woke up just before 0500 to the sound of thunder. Before Sandy and Christine on watch could tell me the weather during my wakeup call, I had already started getting my full waterproof gear from my bag at the foot of my bunk. I was glad it would get some use, but I wasn’t sure how much I was looking forward to being on deck in the rain.

Luckily, when I climbed upstairs through the chart room, I had just missed the storm. As I started watch with Kenzie and Lydia, the sky and water were just commencing their slow process of brightening, moving from a dark grey into their inevitable blue. I could see the heavy storm clouds in the distance, occasionally spitting out a bolt of lightning over Nantucket.

Hourly boat checks went well, as did the many anchor checks. The anchor chain is a really gaudy blue color which surprised me each time I took a peek over the bow.

At 0700, A watch took over. I had an amazingly greasy bacon breakfast sandwich before climbing right back into my bunk. It was hard to sleep once we started getting underway; I wanted to be out on deck to watch the ocean change as we moved, but I knew I would be back on watch at 1900, that duty extending all the way until 0100. I dreamt of megafauna in the waves.

Occasionally, I was woken up by excited chatter. Apparently, people on A watch saw a whale through the mist. My bunk now dons an (optimistic) list on notebook paper:

Wake me up for:

PS √ Loving and missing everyone in Chicago. Hi, mom!

Notes from A Watch by Iris

In my last correspondence with my mom before leaving our anchoring spot near Nantucket, she said that she felt like I was actualizing my childhood dream of living on a boat. This statement energized me and lingered in my mind, even after I was woken up at 05:50 for breakfast before my morning shift. Even when the waves became more unruly than I was prepared for, I tried to witness it with a childlike state of wonder and awe rather than nausea and fear.

This morning I was perched at the lookout post at the front of the boat. I felt like I was being consumed the thick, white fog that surrounded me from all sides. The sky was stripped of any color and bled into the calm gray of the ocean. It seemed as though the mysterious mist which had disrupted our single sunny beach day in Woods Hole had followed us out to sea. It was like awakening into a dream state. I looked out for any approaching boats or buoys, but the fog was so thick I only had about 200 feet of visibility. Rocky, the Chief Mate on watch A, later revealed that at various points during my lookout shift he couldn’t see me from the other side of the ship. The Cramer is only about 135 feet long, and the insidious fog had cut between us.

In the same way that one’s eyes adjust to darkness, my vision began to acclimate to the fog enough to notice a seagull cutting through the fog only to disappear back into the wide open whit e sky. Later while steering the helm, a group of people on watch observed the flipper of a humpback whale expose itself to the mist. It looked like it was waving to us, beckoning us further into the ocean.

I’ve been thinking about how the middle of the ocean is not a place that was designed or intended for humans. We are so lucky to witness the world and its inhabitants from this inhospitable vantage point. I’m grateful to these creatures that exist beside us and for the boat that has protected us from the whims of the sea. When I was on lookout, I saw a gray seal’s little head emerge from the mist with confusion. We locked eyes for a moment and the boat continued its course.

PS √ good luck Jordan on your big drive on Monday ?