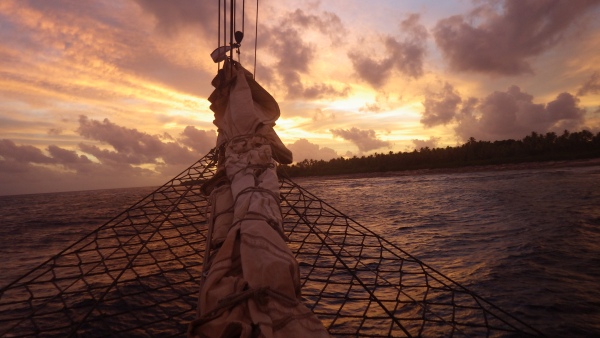 Today is the 8th and with the program coming to an end I am sad but grateful for all the memories that I got from this trip. It all started out coming out of American Samoa in huge 15 ft waves. With the boat rocking and rolling, and majority of my shipmates, including myself getting accustomed to the leeward side (sea sickness), we were confused, sick, land lubbers. Unsure of the lines, and what to do in a squall it was a rough first few days. Days after that it was fun seeing everyone stumble around the ship slowly getting used to the crazy work schedule and get a handle on the ship. The watch group I was assigned to for this trip was A watch. A watch, consists of Silas, Adam, Janelle, Natalie, Cassidy, Miita, Brandon and me. 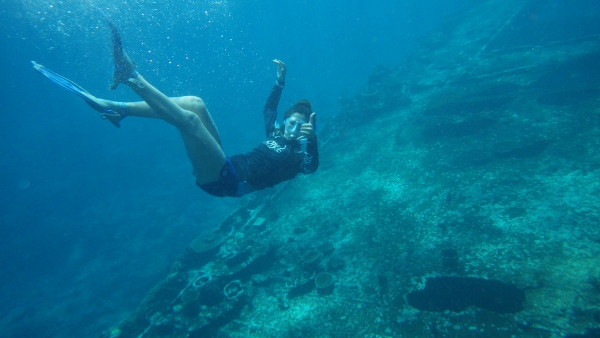 On this whole trip I have gotten so close to my watch group when it comes to the silly 2, 6's after watch turn over to the crazy squalls that we encountered. A favorite moment on this trip was one dawn watch when Silas recited some of the Canterbury Tales. Out of all the jobs on watch, I enjoyed them all for different reasons, but the job I was always eager to go to was lookout. Lookout is a great time to think and look at the ocean, but it also is a fun bumpy ride if the oceans are rough. In the past few days lookout feels like a roller coaster with the bow soaring towards the sky and crashing down in the waves, bringing up all the white water on the bow. These times at the bow are the best, as it is a fun water ride.

As weeks flew by on this trip, we crossed the equator, entered PIPA, visited Kanton, Orona, and Nikumaroro. At each island stop, they all have different experiences that make the island worthwhile. My favorite part about Kanton was meeting the locals. We had a cultural night and it was fun singing and dancing with all the kids. I also really liked hearing the kids dreams when they are older. When exploring Kanton, it also was cool seeing the remnants of the old hotel and military ruins.

When sailing into Orona my favorite thing was snorkeling in the lagoon. The island itself looked like those screen savers most computers have. To better picture the island, think of an island paradise and that is exactly what Orona looks like. In the lagoon the sand is pink and the water is crystal blue. When walking into the lagoon our watch is greeted with little baby sharks and fish. Then when snorkeling in the water we see these HUGE colorful clams. I have never seen clams this colorful. The clams where definitely a highlight in Orona.

The last island, Nikumaroro, was a favorite with greenery. Before getting to this island, we were met with many squalls. My speculation for the reason behind these squalls is that the island is haunted. Niku is known for having an eerie energy, so I think the squalls on the way to the island were the island not welcoming us. In a book I read it said in order to get accepted by the island you would have to rub sand on your face. So the first thing Janell, Cassidy, Brandon, and I did was rub sand on our faces. Another cool thing about this island is that people think Amelia Earheart crashed on this island. On the island, my favorite moment was Miita climbing up all the coconut trees and cutting down green coconuts for coconut water. I have never had fresh coconut water, and it is so good.

With all the fun and science coming to an end we are now in our junior watch officer stage on the ship. In this stage we are the "officer" and assign who does what job on the hour. We are also in charge of making the calls of sail handling. Yesterday I was the watch officer for the second half of the watch and it was challenging but exciting. I had to make the sail calls for gybing and try to get the boat to go 2 knots for science. With the help of Adam and Silas, who were some of the first few JWOs, I was able to figure out how to get us to the speed we need with two gybes! It was exciting to see the ship move with your own commands, but it also is scary. During JWO I didn't focus more on if I was doing something correctly; instead I was more focused on making sure everyone sail handling was safe. I love my watch and I don't want anyone losing fingers on watch. Overall in the JWO phase I feel I am getting closer to my watch, and we all trust each other. I would be eager to furl up a sail for anyone on my watch.

Coming to the end of this trip is also funny, as we ended in rough waters just as we started. But unlike the beginning, we are no longer sea sick and confused. You can see everyone on the ship eager to help, even with they are not at their best and have full confidence in sailing. I am so glad I was able to do this abroad experience and I can tell you living at sea isn't as scary as it seems, in fact, it is pretty relaxing and fun. Sailing makes you appreciate the smaller things like a FAN and SHOWER but it also challenges you in ways that makes it exciting and worthwhile.

Sophia Sniffin, Trinity College Hello to all who are reading this! We are nearing our last few days of our on shore St.Croix [...]

Anna Merrifield, Wesleyan University Hello from St. Croix! Wow, I feel a bit daunted to write about this particular day, as it seems impossible to describe [...]

Andre Lai, UC San Diego The serene azure waves off the coast of Frederiksted gently lapped against the ivory hull of the Cramer as [...]

Captain Chris Nolan Cramer has arrived in St Croix after an excellent professional training cruise from Rockland to the Virgin Islands. Today, we anchored [...]