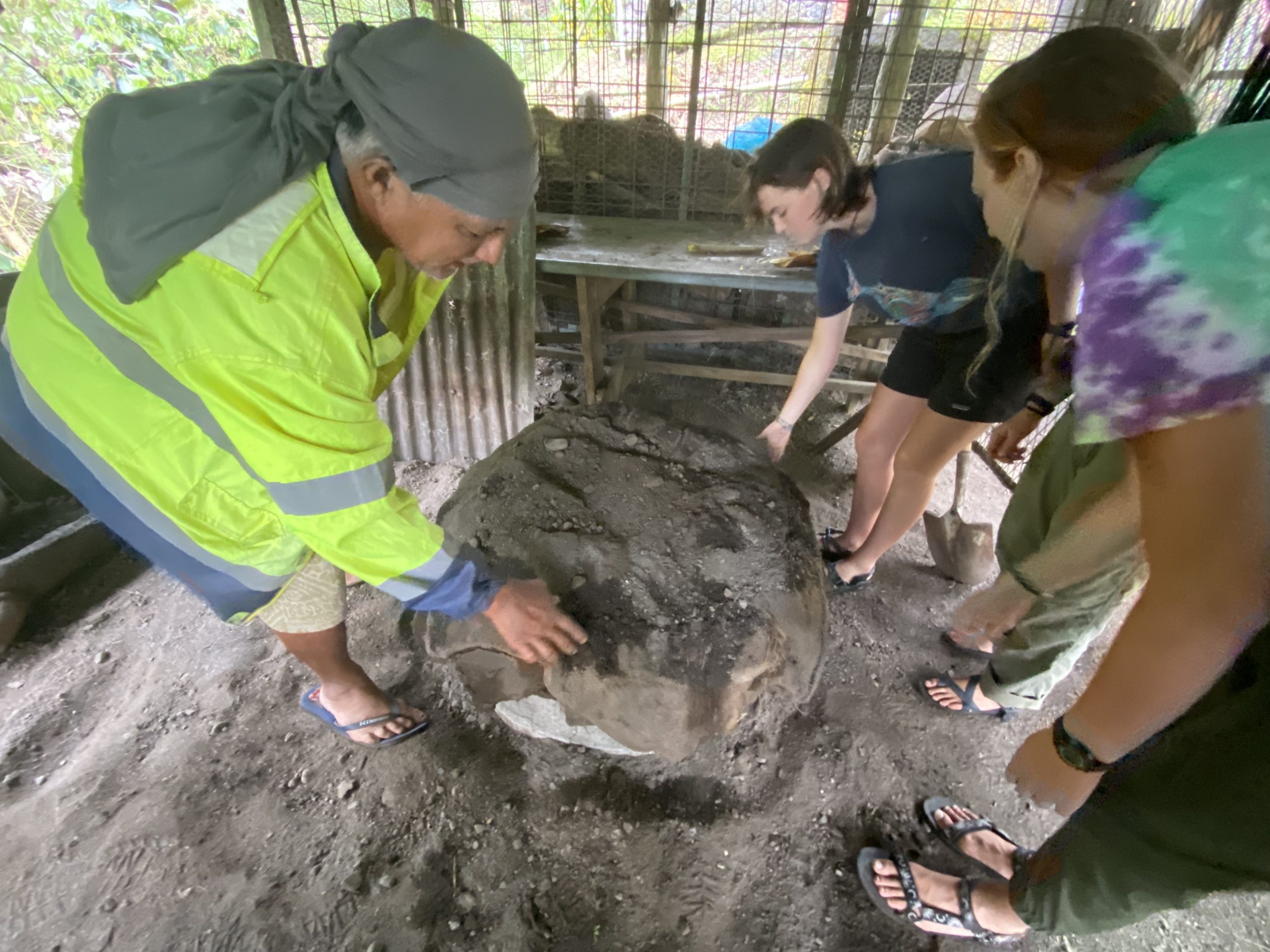 Moohono, Katie, and Frankie covering up the umu

Moohono, Katie, and Frankie covering up the umu

Heyo! Kamryn here, today, blogging to ya with an amazing, albeit cloudy, view of the craggy caldera. The day started a touch earlier than usual, with a 6am meeting time at the umu. After lots of prep yesterday, this morning, Mo’ohono and Jan were able to light the umu at 4:30am. An umu is an earth oven, in this case, a big circular pit, made of concrete, about 2ft deep and 2.5ft across.

Yesterday, Mo’ohono and Jan had put volcanic rocks and wood into the umu, then this morning, added coconut husks and lit the fire. By the time most of us had arrived later in the morning, the fire was starting to die down and you could see the black rocks glowing red. People traditionally make food in an umu every week and for celebrations, involving many people for preparation and cooking, as well as sharing a large meal together afterward. 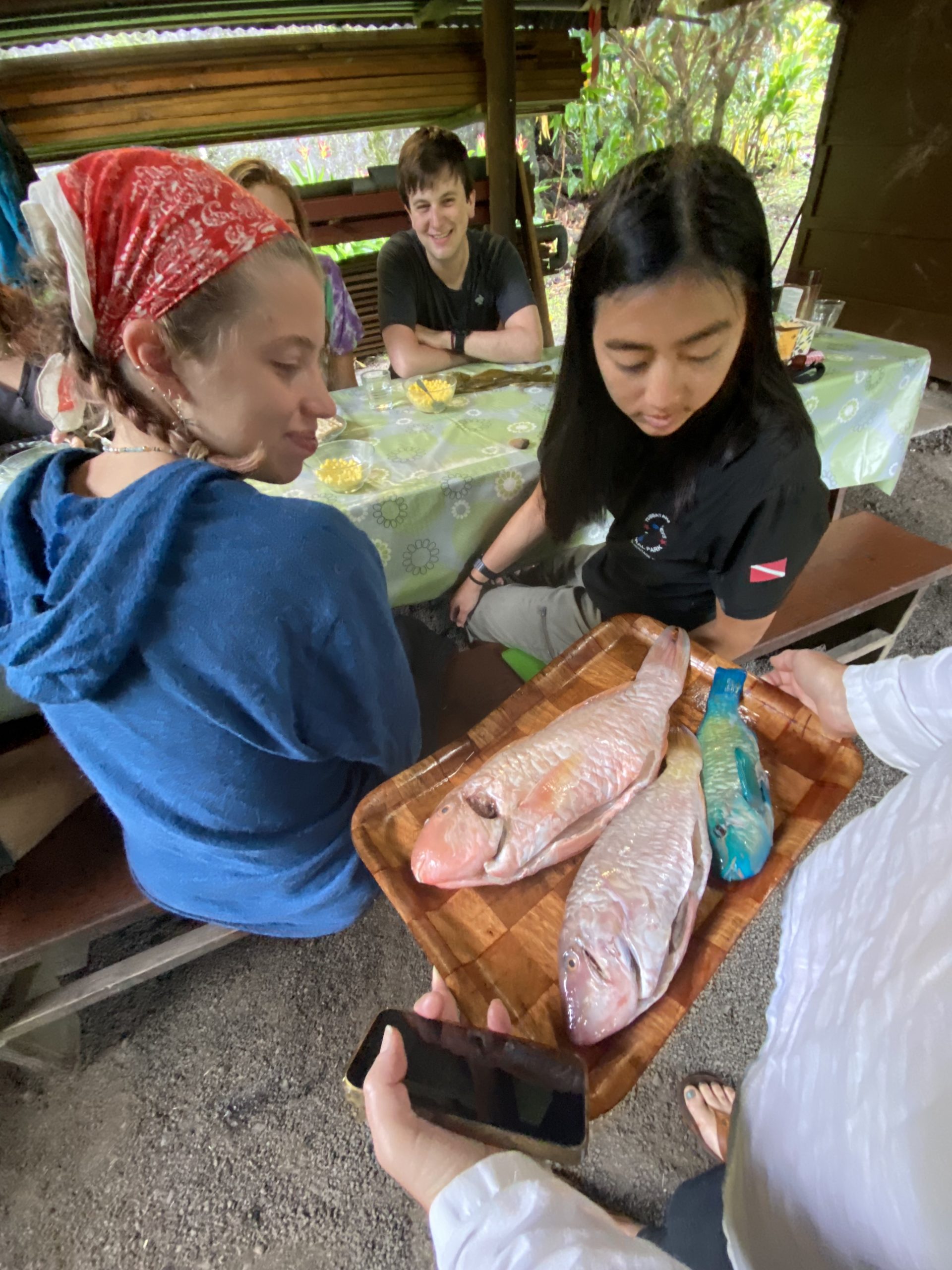 After chatting and watching the wisps of fire coming up through the rocks for an hour, we went up to the kitchen for breakfast from Yolanda. Josiane had steamed some ipo for us to try in the morning. It was delicious! The notorious 321 recipe of flour, shredded coconut, and sugar, wrapped up in auti leaves—like a sticky bread. We enjoyed the savory and sweet treat with butter, fresh pineapple Yolanda had sliced up, the other staple breakfast items, and as another special treat, some cereal that tasted like gorilla munch.

A few of us helped salt and wrap up the parrotfish for the umu once we had finished eating. I wrapped up a little blue one, first in nono leaves for flavor, then banana leaves to hold it in, then auti leaves to be able to tie up the bundle. We carried all of the food down to the umu in the palm frond baskets we had woven the other day with Josiane. The fire had gone out and the umu was cool enough, according to Mo’ohono, to put all of the food in and cover it up. To increase steaming, on top of the rocks, we laid down banana tree trunks that were split, since they hold a lot of moisture and sap. On the trunks, all of the food went in, mostly wrapped up in leaves or in metal pots. There were parrotfish, bananas, uru (breadfruit), ipo, po’e mautini (squash custard), fafa (taro leaves and stems, chicken, onion, and coconut milk), giant clam curry, and chicken. So much food! 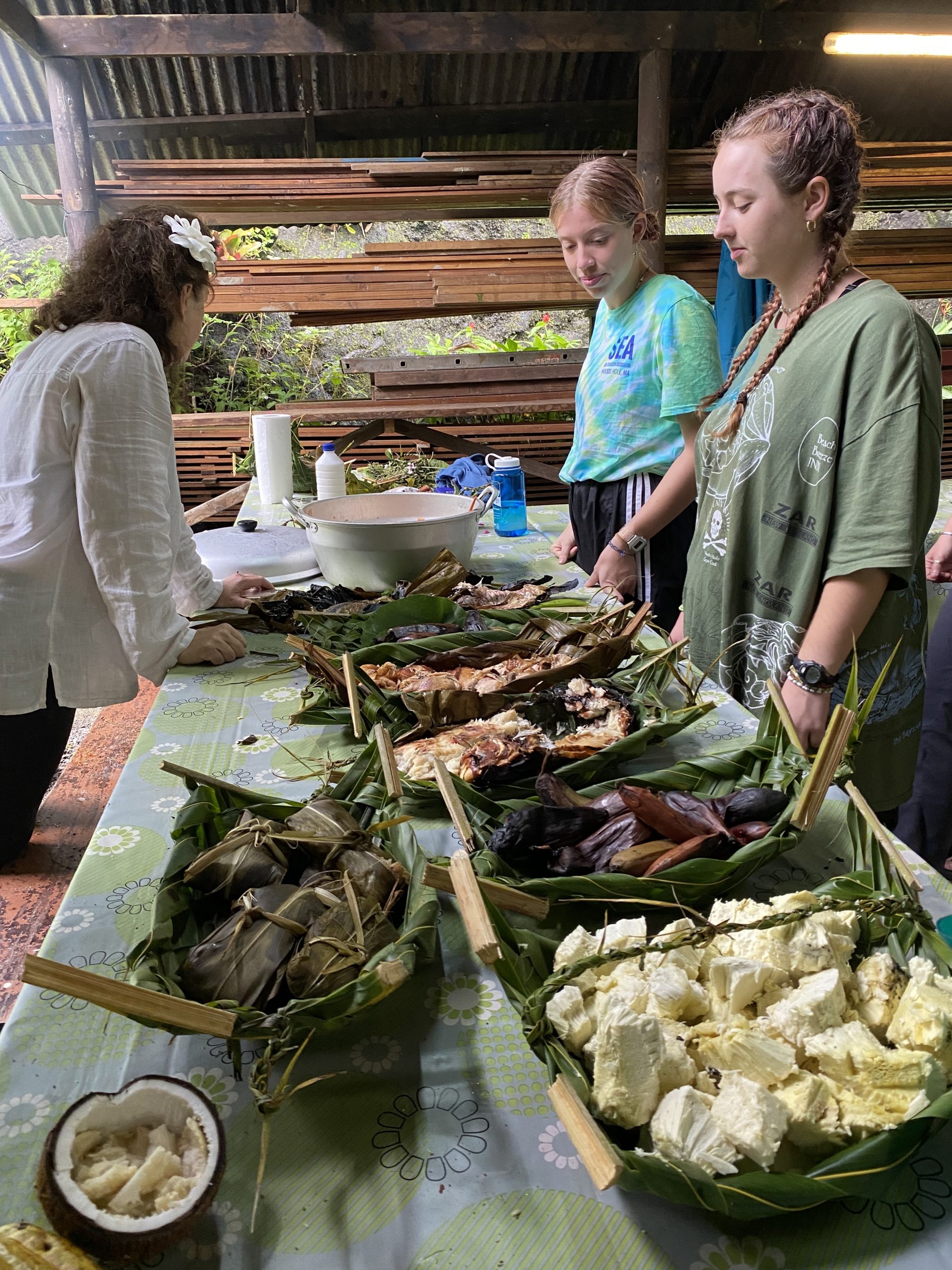 Once all of the food was in, after some miscommunications and holdup on the fafa (Mo’ohono asked for the fafa from the kitchen, Jan came back with coconut milk… the fafa wasn’t acquired for another 10 ish minutes…), we covered it up with purau, banana, and uru leaves. Such a big pile of leaves! Then, a bunch of sacks we had wet in the river went on, to keep in the steam. People shoveled earth on top of the sacks to weigh them down. And there we had it! Before burlap, people would use more purau leaves to seal the oven up. Etoufee as Mo’ohono said. He also said an anthropologist wrote in the past that societies that use inside fires, are closer, as opposed to outside fires, those above ground.

Once the umu was all loaded up, we had three hours to wait as everything cooked! Katie and I gathered auti leaves and a couple of red flowers and made a hei for Yolanda, as a thank you and early birthday gift. Marley went to paint a card for her, and others went to gather more coconuts. After finishing the hei, I worked on my sheet anchor, making my page for Fare Hape that Allison has requested. I included information and drawings on maraes and umus. 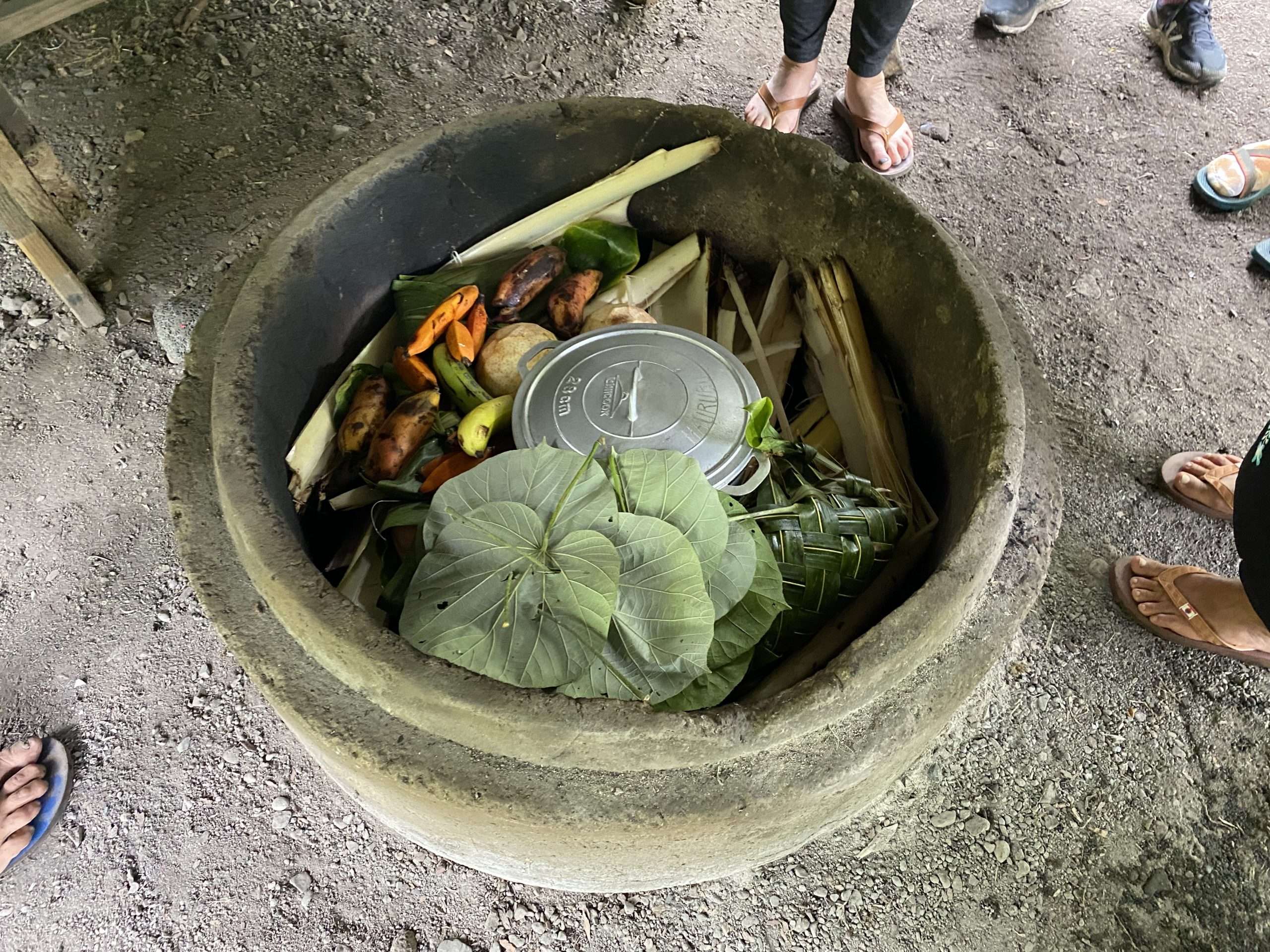 It was 10:30 now and time to meet up again in the kitchen. People shaved and chopped up carrots and cucumbers for poisson cru, the national dish here. I, however, never made it to the table to help food prep. I was distracted for about two hours, without even realizing how long it was, by some tiny kittens! There have been two cats that frequent the kitchen area who are pretty friendly and we pet all the time, and sometimes feed. But today, after rumors of kittens, I finally saw a little one! They were pretty shy, not coming out farther than underneath a wooden stair, but eventually, I got the little buddy out by getting them to pounce on this long shred of a leaf. How cute! The kitten is tiny, someone guessed about 5 weeks old, and tiger striped. Reminds me of another little kitten I know named Spaghettio. Another little buddy also finally was peeking their head out, by the time I got the other one close to me and picked up once or twice. This one is bigger and much much more shy thus far. Hopefully they come out soon!

Eventually, I was pulled away from the kittens because the food in the umu was done and we all went down to uncover and bring food up to the kitchen. We reversed all of the layers in the umu, smelling the slightly smoky steam as all of the food was revealed in slightly crispier leaves. We carried the food up and set it out on the table. Wow! What a sight! I thought it was incredible that so much food was made from the plants around us, and cooked in even more plants that we had gathered. When our palm baskets become burnt or brittle, they just go back to the earth, tossed outside on the ground.

We enjoyed a wonderful and massive meal of taro, fafa, giant clam curry, chicken, parrotfish, different bananas, poisson cru, po’e mautini in coconut milk, and ipo, topped with coconut milk and miti hue, fermented coconut milk. It was delicious and in good company! Everyone had helped in every stage of the meal, from gathering auti leaves, to watching the fire, to boiling the oxalic acid out of the taro, to husking coconuts, to oiling leaves. I see why cultures that use earth ovens are close-knit communities! My personal favorites from the meal were dessert, of course, the ipo and po’e mautini, as well as some of the bananas and the lips of the giant clam I tried. Post lunch was time for everyone to digest and relax, where I worked on this post and read some of my book.

Afternoon activities included walking tours with Mo’ohono and Josiane, the former speaking about the marae here in Fare Hape, and the latter about plants and their uses. We went across the road to the marae we had helped restored the other day, and discussed different parts of it, human history and use of the sites, and the significance of areas. With Josiane, we walked the way back, stopping at many of the trees to talk about the name of the plant and uses, varying from medicine to food to va’a, canoe, building. We were able to taste and smell lots of different plants, many of which I’ve never seen before coming here! So many plants have so many different uses, and Josiane has known them since childhood because of the utility and continued use.

It’s almost dinner time and I’m going to wrap this blog up since this is quite the lengthy entry. Tonight will most likely include some packing up and getting ready to leave Fare Hape tomorrow morning. I’ve been learning so much already and am grateful to our generous and kind hosts here. I’m excited to keep having new experiences and can’t wait to share them with loved ones back home later on!