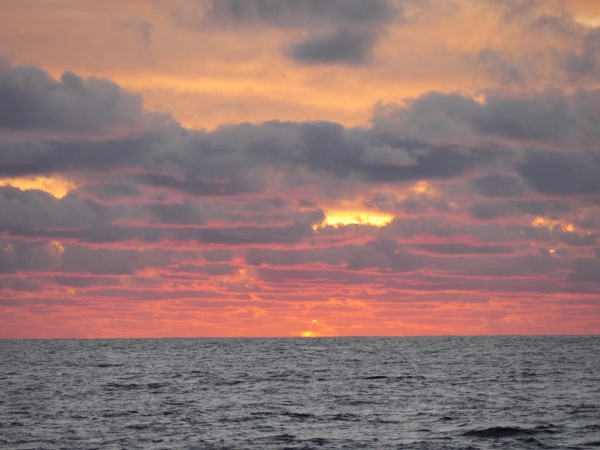 The Program: It seems so long ago, on June 10th, that 22 students and three faculty met to begin S-287 Protecting the Phoenix Islands (aka: PIPA – Phoenix Islands Protected Area). That evening after a number of introductions and orientations it was explained to the students that the cottages were much more than accommodations. It was within these buildings on the SEA campus that the important work of building a community would begin. A community that could live and work together for 40 days at sea. Challenge accepted! The S-287 crew are a fine tuned machine. There is always excitement in every day, there is curiosity of all variety from the engine room, to celestial navigation, to the contents of the cod end of our net tows and the creatures seen through the lab’s microscopes. There is the appreciation of the simplicity of life at sea; sunrises, sunsets, what’s for breakfast (snack, lunch, snack, dinner, snack), what time is watch, a cool shower, and several hours of consecutive sleep. There is the hard work and cooperation of academic projects, managing the deck, or managing the lab. An abundance of humor/fun in all things at all times. Impressive to see smiles and a timely laugh at 0200 in the midst of a squall with driving winds and sideways rain. But most impressive is this community that began as strangers two months ago. 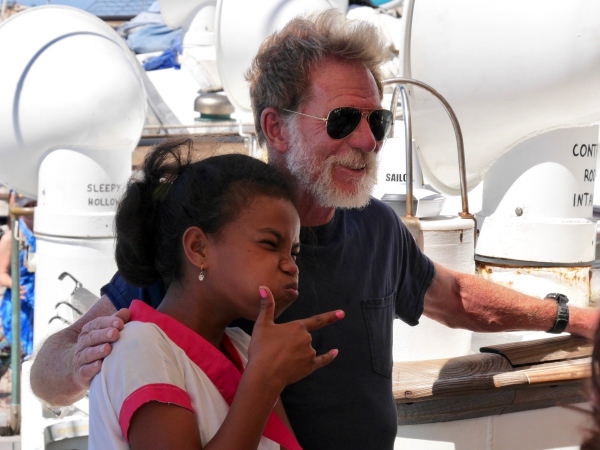 The Cruise: As you read in previous blog posts, the Phoenix Island cruise track is amazing. We’ve been sailing in one of the most remote places on the planet. We’ve been challenged with strong winds and large seas. We’ve crossed the equator (twice!), and our ship is now crewed by Shellbacks. We visited with a tiny community on Kanton, where material things are essentially non existent but love and happiness are thriving. We’ve snorkeled along side of huge schools of fish, swam with sharks, turtles, and manta rays – all as curious as ourselves. Our remote atoll visits created dreams of surviving on island paradises. We’ve sailed over 3,000 nautical miles.

The Story of the Stays’ls: The ship can carry up to nine sails at one time. It is fairly common to sail with “the four lowers”; the mains’l, the main stays’l, the fore stays’l, and the jib. During light wind the jib tops’l and/or fisherman stays’l may be added to the mix for more sail power. When sailing with the wind at our backs, the course, tops’l, and rafee can be set from the foremast yards for efficient downwind sailing. However, whenever the ship is underway the main stays’l and fore stays’l are almost always set. These are the work horses of our sail plan. They are relatively small sails compared to their counterparts, but they do important work. They assist in stabilizing the ship when winds are light and the seas want the ship to roll, they are critical in a balanced sail plan while underway or when hove to for our science deployments. These two sails often stay set and working during squalls when strong winds demand the other sails be taken in. On our cruise they performed heroically, carrying the ship through many squalls, providing all the power to tow nets at 2 kt. and reducing the roll in sloppy seas. Our main stays’l was tired at the beginning of our voyage – due to be retired/replaced in between S-287 and our next SEA Spice cruise. Prior to our cruise, the sail received two new panels of sail cloth and some TLC. This morning, with just 50 nm left to sail, the sail tore. We’ll make it in fine without that sail, but it served us so well, withstanding day after day of sailing, multiple squall winds in excess of 40 kt., dozens of sail maneuvers.

The Crew: I leave most of this to the previous blogs. I do want to say that the S-287 PIPA crew are truly amazing. As mentioned, the difference between our first few days underway and our crew on the last leg of our voyage is dramatic. Although conditions are similar to departure day conditions, it is a different crew that walks and works the decks of the ship. This is a salty group who move about with ease and comfort even as the boat heaves and pitches. They eat their meals, half with the gimbaled tables near their chin, the other half with the table resting on their knees, as if this is the normal way meals are eaten everywhere. But the real prize is the way in which everyone looks out for each other and enjoys the company of 35 other people.

The Final Passage: After leaving the Marine Protected Area of PIPA we began the final passage back to Pago Pago, American Samoa. As we close in on the reality that we’ll soon be back in port, coming alongside to conclude the cruise, we are all filled with mixed emotions. There has been talk about a hard turn to starboard, running downwind, away from American Samoa, and the start of our circumnavigation. The dream speaks to the desire for this cruise not to end. There’s also some talk about family and friends and pets and plans. Even with the mountainous island looming ahead, the crew is mostly focused on the here and now – doing what they know best. Sailing well with a family of 36.