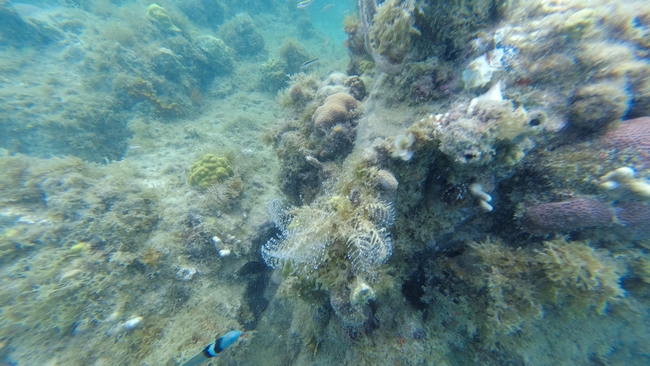 Today was the last reef survey of our trip. While we will have other snorkeling occasions, this will be the last case where we are collecting the data for our papers. The day began with the early wakeup call at 06:00 for breakfast. After this we went on to do our ship chores, from sweeping and mopping the soles to wiping down the heads (restrooms) with envirox. Once everything was made spick and span, we all mustered on the quarter deck to prepare for the day. After debriefs and steps to prepare our gear, we were finally ready to begin approach the reefs. So, we loaded up our equipment into the rescue boats and followed suit to make our way over to the snorkeling site.

For this survey I was partnered up with Hux to perform our invertebrate surveys. It wasn’t until we both fell back into the water from the rescue boats that we noticed, this had to have been the deepest reef we’d been to yet. Before making it to the reef we were suspended in deep water where you couldn’t make out the bottom, and little specks of detritus floated around us like snow. Even though we’ve had some similar experiences on our surveys before it’s still an interesting feeling to just be floating, surrounded by nothing but blue. After taking in the experience, we made our way to the shallower parts of the reef where our transects would be set up. The reef was an incredible spectacle of towering plateaus and deep ravines from the countless years of coral building atop coral.

From there we began our surveys. Due to the depth of the reef, we performed many duck dives to survey the invertebrate communities. With every dive it felt like the reef would just open up, every new angle would reveal more fish that had been hiding just under the jutting edges of the once living corals. There were many territorial fish nipping at any intruding fish, massive clusters of long spined urchins huddling together in the crevices, and many juvenile fish alight with colors making their home on the corals. As always, it was an incredible sight.

The invertebrate survey went along smoothly, we had counted a variety of species, particularly a bunch of urchins and Christmas tree worms. There were some gems among the species we found as well. Hux found a beautiful flamingo tongue on a sea fan and I had found a brittle star nestled away in a small crevice within a mound of coral. Fortunately, I had brought my action camera and snapped quite a few photos and videos of what we saw. I look forward to sharing these photos with my friends and family when we get back for Christmas.