Floating Lightning Rod and the Sea 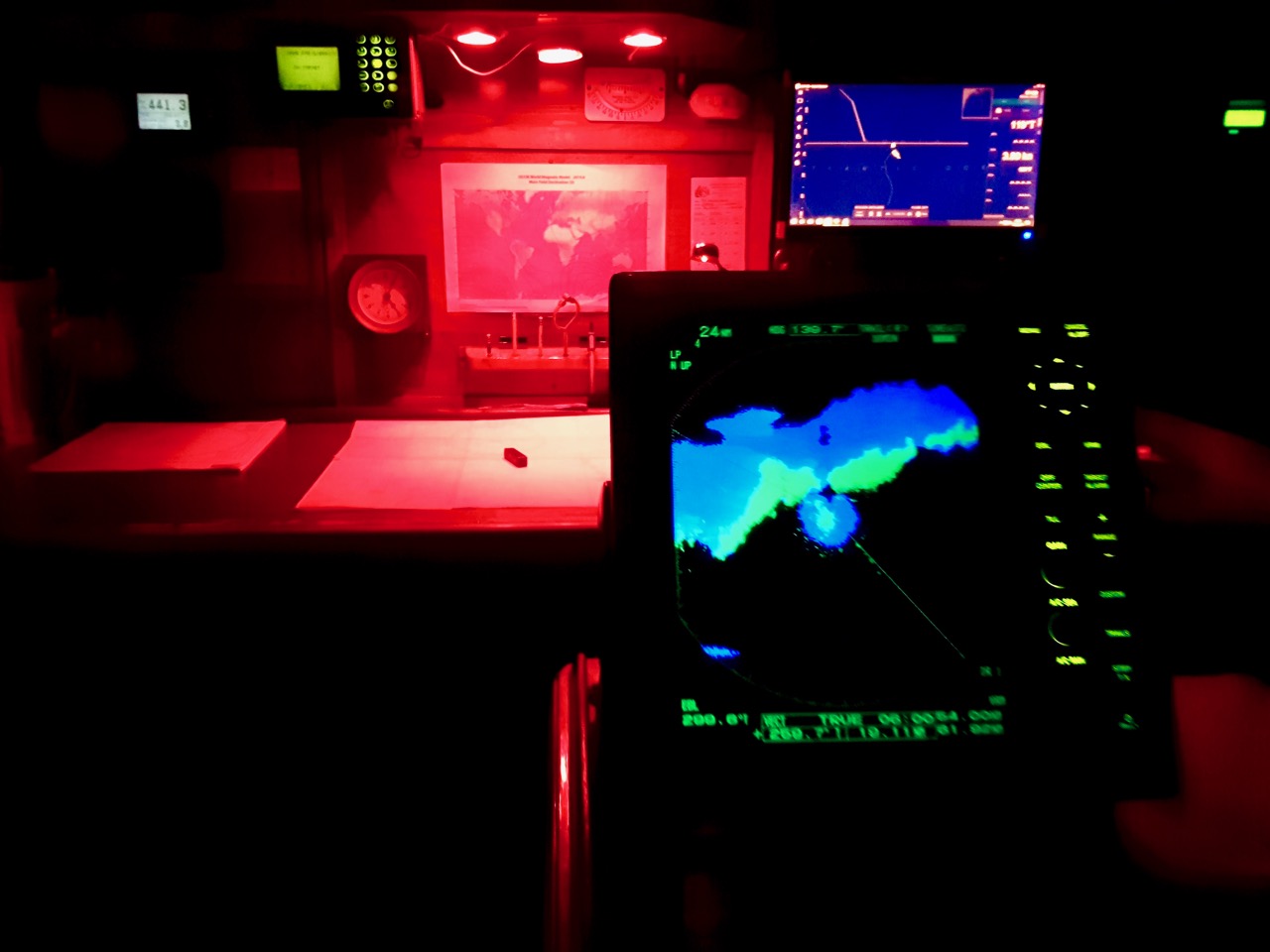 Radar monitor depicting the cold front coming in from the northeast.

Current Position
Riding the gulf stream to the Big Apple

Floating across the great blue, time flows a little differently here in our coconut life raft. At times it passes by slowly and at other times, all at once. Our concept of time doesn’t begin or end with the sunrise or the sunset, but rather revolves around a twelve-hour rotation schedule crafted by a clever algorithm. Since sailing from Key West, both the sun and the moon have watched us set and strike the sails, scrub the deck, deploy the hydrocast, and tow the neuston net. We in turn have watched the sun and moon chase each other across the North Atlantic sky and have even begun to learn the constellations of the stars during the night watch shifts.

As our knowledge of the ship and its interactions with the seas and skies broadened, we as a collective group have progressively become more keenly aware of our surroundings. We have dealt with countless hot days in the sun and have stood watch in the heavy rains brought on by angry squalls of the night. But last night was our first encounter with a cold front that brought on an especially energetic electric storm accompanied by 12 ft. waves. I’ve had my fair share of thunder storms from the safe comforts of land and insulated housing, but never from a 120 ft. long hunk of metal floating in the middle of an ocean. Attached to this said floating hunk of metal are two equally long lightning rods conveniently angled at 90 degrees to hold the varying sails up, as well as daring every God of the sky to strike her mast.

All jokes aside, we would have been fine - the lightning would have been redirected around us and straight down to the hull where the electricity would then have been dispersed into the ocean. It was actually pretty mesmerizing to watch the flurry of flickering bolts jump from one cloud to another. It was also fascinating (and slightly ominous) to track the storm on the radar and how quickly the cold front was able to cover 72 nm within a couple of hours. Our shift for B watch began at 1900 but it wasn’t until 2030/2100 that the wind picked up to a force 7 and the distant flickering lightning began to creep closer from the North. At 0015, we gybed by passing the storm tris’l and turned 180 degrees to sail south.

Although we were unable to avoid getting hit by the storm, we met her on our own terms and instead, got clipped by a smaller portion of the front moving northeast. Unfortunately, the rain and wind were still strong and poor C Watch took the brunt of the hit since our turnover was at 0100. Nonetheless, it was an unforgettable experience that certainly served as a humbling reminder just how beautiful but also powerful the ocean is.

Shout out to my family and friends back home and abroad, I love you all. I promise I haven’t sailed off the side of Earth yet and that I’m still happily roaming the internet-free seas.