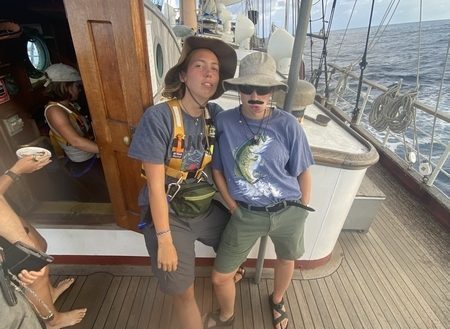 Hello world, it’s Marley and Katie again. We started you off and we thought it was only fit to write another blog as we near the (bitter) end. That was a sailing joke, for those of you land dwellers who might not get it.

Today, our day started bright and early with 6:00am wakeups for our 7:00am watch. After eating some delicious chocolate chip pancakes thanks to our lovely Stu Stew, Nick, we were ready to go. Marley was dubbed the “nav- o” (Navigation Officer) for the first three hours of the watch. This meant that she was responsible for calling all of our sailing handling for the morning and safely navigating our passage through some somewhat nearby atolls.

Here’s what we did:

After much toil, the boat did in fact turn and we began our final passage back to Tahiti. The wind was anything but predictable - we went from a broad reach on a starboard tack to just running to a broad reach on a port tack to basically a beam reach on a port tack. Yeah, we know sailing terms now. Marley led the first half of the watch with relative success (given that we didn’t hit any atolls) although she did say “raise” the tops’l (and got made fun of) and also plotted the wrong GPS points so that we were

Next, Katie was up. The second half of the watch was hers to conquer as navo. How was she feeling? Stellar. How was Marley feeling? Relieved. The wind? Still unpredictable. So buckle up folks and get ready for the most exciting part of the day: setting the storm trys’l. Let’s just say, Marley has never been more excited.

For those who may not know, the storm trys’l is a sail that is set in replacement of the mains’l when weather conditions are bit less predictable (or as Katie says, “squirrely”) and we are worried about the wind swinging the mains’l and boom. It’s Marley and Katie’s favorite sail because it has the best line on the ship: the storm trys’l running tack. Why is this the best line on the ship? If you even have to ask, you just don’t get it.

Anyways, we set the storm trys’l. Katie sort of called the setting of this sail until Rocky took over because the sail got caught behind the mains’l- it was a whole thing.  However, Marley fulfilled her sailing dreams and tended beautifully to the storm trys’l running tack. Katie ALSO did not hit any atolls or motus, so we are going to call that a success as well.

After watch, we went our separate ways (or, as separate as you can get on a

130 ft boat) until we missed each other too much and so instead did homework in the main salon together. Both of us were shocked to find an entire (dead) goat in the galley as we entered the salon to work on our final projects. The goat was purchased on Nuka Hiva, was very well loved, lived on a beautiful island, and will be supplying many dinners into our future. Once again, Stu Stew Nick did a fantastic job butchering and cleaning it - he really can do it all!

The rest of the day passed in a blur: we had class, ran emergency drills, did more homework, and ate a great dinner. The sunset was beautiful, as it always is - it’s ridiculous that we only have three left. And now, we’re trying to rapidly finish this blog from the ship’s library so that we can get some sleep before our dawn watch.

Love to both our families, friends, fans, and the Fo’c’sle, Marley (Hot Dish) and Katie (Raw Fish)