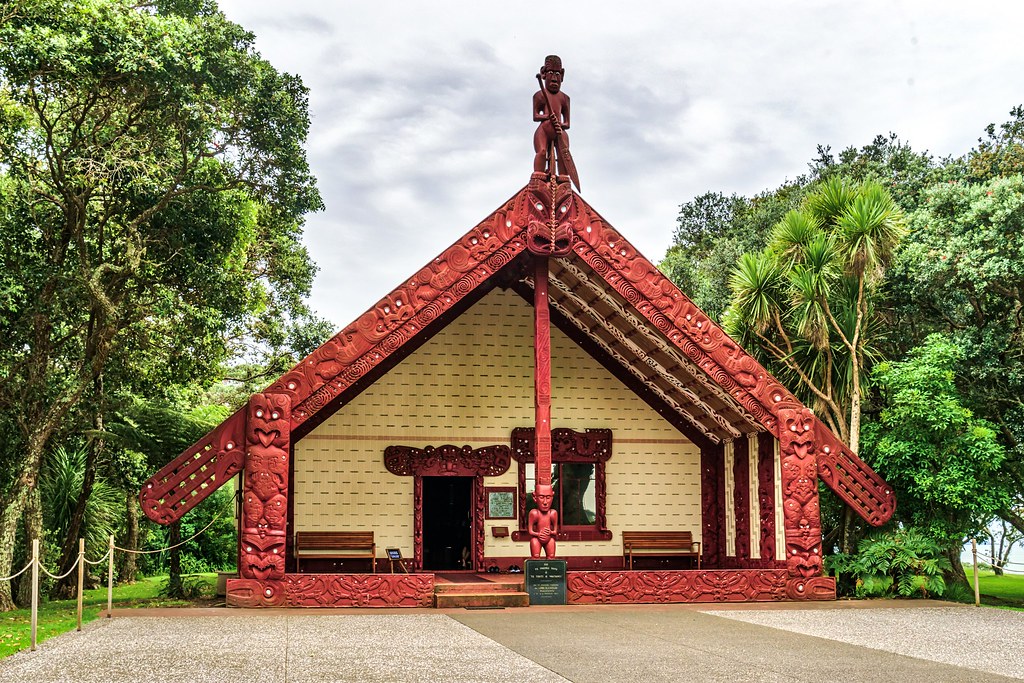 The national pan-iwi meeting house at the Waitangi Treaty Grounds, in which we attended the Māori cultural performance

One of my favorite hobbies that I've picked up from my time at Olin is spinning poi, which I was pleasantly surprised to find had Māori roots. Poi are a set of two weighted balls at the end of strings with handles on the other end, and at Olin, poi are one of several different props people could choose to learn how to spin. I found that the Māori style of spinning poi is fairly different from the flow arts style I had picked up from Olin, which each style also having its own rather unique community of people who practiced it as well.  This made me wonder - how do Māori feel about the emerging flow arts community adopting poi spinning and then sharing it with the world? Would they be happy to hear of its widespread acceptance or would they view it as cultural appropriation? Based on what I could find online, it looked like reactions were mixed, but overall were generally supportive of the movement.

During our visit to Korareka Russell we were fortunate to be able to see some Māori poi spinning in what was called an "authentic Māori performance" at the Waitangi Treaty Grounds. Attending this performance brought about rather mixed opinions from my shipmates, and today in class, we discussed these opinions as a group. Something that was often brought up was the concept of authenticity - since the performance we watched was a popular tourist attraction, it meant that anyone could purchase a ticket to watch the performance without necessarily understanding the culture behind it. With that in mind, was this performance truly authentic?

From our studies, we also learned that cultural practices can vary by tribe, which made us wonder if all the nuances Māori tribes could possibly be fully captured in one single experience. From talking to the tour guide at the Treaty Grounds, we learned that the content of the performance and the museums was approved by one of the performers. While it's good to hear that the content is audited by Ma*ori people, it also made us wonder whether a small handful of Māori people could put together content to fairly and accurately represent all Māori tribes. Naturally, there are no clear answers to any of these questions, but it was definitely worth thinking about and hearing everyone's perspectives.

We could discuss the ethos of non-Māori poi spinning or providing tourists with an "authentic" experience all day, but in practice, what should we do with this information? Should I stop spinning poi because some view it as appropriation? Should we avoid tourist attractions that consider themselves "culturally authentic" while not being fully representative of the people it claims to represent? While the answers may differ by person, the conclusion I've reached is that spinning poi and attending these tourist attractions are all right, as long as we keep an open mind and remain sensitive to how they may impact individual people differently. If I found that one or two individuals took offense to the cultural performance, I think it's important to take the time listen to them and hear their stories, but I think it would still be ok to attend the performance. Conversely, if several individuals to took offense to it, then I think I should do what I can to not show support for it. No matter what, it's impossible to act in a way that won't offend someone, so I think the most we can do is to continue listening to individuals and paying close attention to how our actions affect different groups of people as we continue in our voyage.