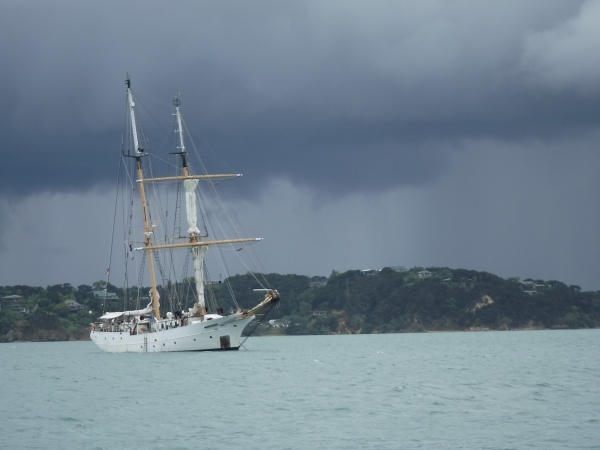 The Robert C. Seamans at anchor in Kororareka Bay, with Pahia in the background 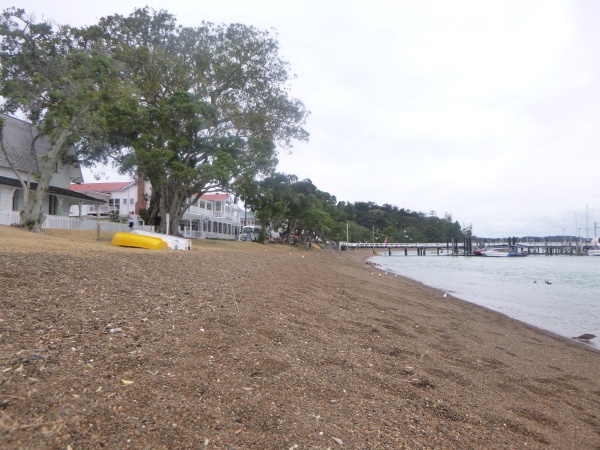 The beach of the small village of Kororareka Russell

Tucked away in the Bay of Islands, Russell and its port have a layered history, from Māori settlement to whaling and debauchery to more recent recreation and big game fishing. The town’s first Māori-given name, Kororareka, translates to “sweet penguin,” after a tale about the sweet meat of the local blue penguin. In 1844, the town became Russell with the establishment of the first permanent British settlement and honored Lord John Russell, the then British Colonial Secretary. Russell continued to develop as a shipping port, and the European population expanded, increasing in convicts, drunken seamen, settlers, and traders. Just before the mid-eighteenth century, Russell was known as “hellhole of the Pacific,” with Charles Darwin, in 1835, describing the area as “the refuse of society.” The town gradually transformed into a recreational oasis and, in the last century, the Bay of Islands has experienced a surge in tourism.

The Robert C. Seamans and her crew docked in Russell’s turquoise waters on February 21st. For the student’s marine policy course, “Conservation & Management,” my watch and I were tasked with taking a census of the current human and land uses, as well as the various vessels, of Russell harbor. Together we counted 63 vessels in the harbor at 20:12 (we use military time aboard), with recreational sail vessels accounting for two-thirds of the overall tally. Most of the sailing ships were small catamarans and sloops. There was another tall ship, the Albie, in port, and several students met some of her crew onshore. Additionally, we could see 58 people dining, shopping, and walking along the main strip of shops. These counts are unsurprising because of Russell’s popularity as a recreational destination, and the census underscored the importance of the tourist industry within the Bay of Islands.

Referencing back to the last Census blog post about Auckland, Russell pales next to that metropolis in nearly every category—population, shipping, shopping, etc.—except tourism. When I muse about these two places, I make the following analogy: Russell is to Auckland as Martha’s Vineyard is to Boston. Skyscrapers and apartment buildings and container ships busied the Auckland harbor and city; whereas in Russell, while boats buzzed in and out of port, colorful single-family homes speckled the landscape. The differences in uses and construction of these two cities seem to represent their personalities, with Auckland giving off a feeling of constant motion and Russell exuding a relaxed attitude.

Further attracting tourists, Russell and the surrounding area carry great cultural significance to New Zealand. Across the port lies the Waitangi Treaty Grounds where British officials and Māori chiefs signed a document, the Treaty of Waitangi, which began formal British colonialism of the nation. Previous bloggers have described and ruminated on the trip to the Grounds and the complexity of identity, but the Grounds represent another important facet of tourist attraction.

Climate change threatens these locations and their tourist industries, and leaders need to ask questions to be able to consider the best combative or reductive strategies to address this issue. For example, how are increased weather events going to affect Auckland’s built landscape? How are rising sea levels going to change Russell’s recreational activities, especially sailing and fishing? How is erosion going to impact the Treaty Grounds? Whose voice needs to be included in the conversations? In our course curriculum, climate change comprises one of the four central themes, so we have been pondering the many answers to these questions and others with resources such as census reports. The evaluation of the construction and use of space serve as a way to record change over time, advocate for policy, and gestate on our built worlds.