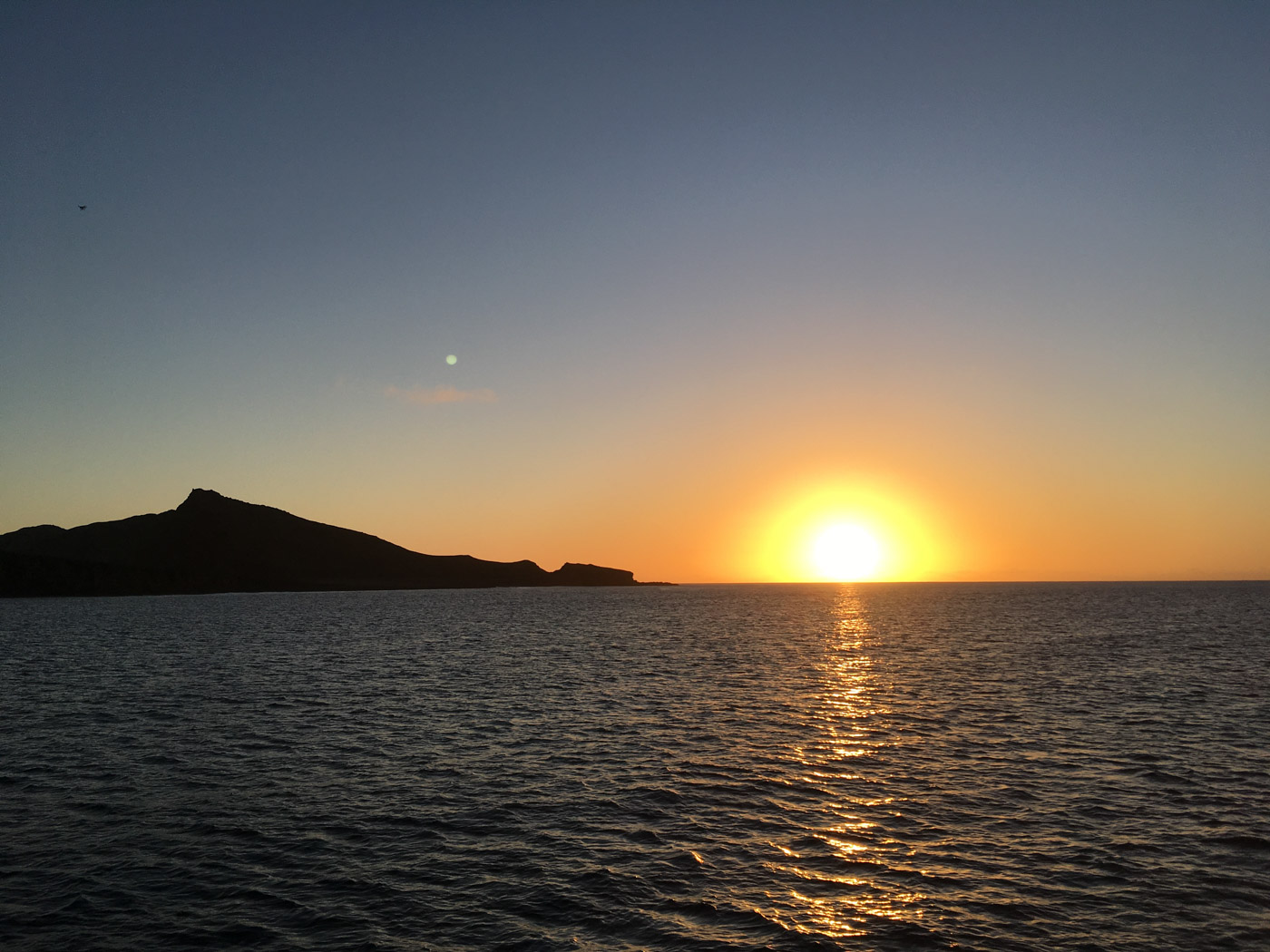 Today, we departed Nuku'alofa under a hot afternoon sun and fair wind. The dock where the ship has spent the past few days moored is tantalizingly close to the outer islands and light green coral reefs, so to find myself traveling back onto greeny blue water is a long-awaited treat. It's a tall order to report out all that I have experienced in the past week, so to sum it up I will simply say I am humbled.

As you have all read on the HTHH Blog, our time visiting the volcano was an experience none of us are likely to repeat. Less then 100 people have set foot there, where the most destructive and most regenerative processes in nature are at work. The volcano itself, a new land bridge connecting the islands of Hunga Tonga and Hunga Ha'apai, is black and scarred with erosion crevices from tropical rains that have fallen in the few years it has existed. Grey pockmarked pumice, red iron-rich rock, and yellow powdery rocks that crumble in our footsteps are strewn and layered over the windswept landscape. It was easy for me to feel as if I was an astronaut walking on Mars. Circumnavigating the island one afternoon, I looked to my right and saw fresh columns of white spray from humpback whales traveling along a known migration route just to the east of the island. A tiny calf bounced from the waves in a joyful breach that made me smile. It's mother, swimming nearby, arched her long back and sent a great plume of water skyward in applause. I had just spent the earlier part of the day watching cliffs rife with birds winging and swirling about - tropicbirds that look straight out of a prehistoric guide, with white fairy-like bodies and long red tails that stick out like slender sticks as they fly; frigate birds whose conversations at dusk sound like cats screeching, and whose tails can morph into forked or single foils depending on whether they wish to maneuver or glide; and petrels, birds from back home (!), whose little homes we noticed as holes in the sloughing cliffs of Hunga Ha'apai. The cacophony of sights and sounds in that place were deafening, nearly as beautiful as the Royal Choir.

On Sunday of our time in Nuku'alofa, Pen, who is traveling with us as a Tongan observer and resident of the city, generously invited us to attend the morning service with him at a Unitarian church he has been to before. Sundays here are silent. The shops are all closed, cars remain parked in the streets, and voices are generally the loudest noises. Although I was originally hesitant to attend because I did not want to be intrusive, as soon as I sat down behind rows and rows of children and adults singing beautifully into the still air beneath a stained glass window, I felt I could be there too. The windows and doors were all open along the side of the structure, and community members entered to join throughout the service. The King of Tonga himself was seated at the very front. A small brass ensemble and the Royal Choir led the hymns before and after the sermon, but as I listened closely I could pick out the deconstructed harmonies layered beneath the melody coming from all around me, people just singing to be together.

This morning, I had the opportunity to talk with the director of Nuku'alofa's Red Cross branch. My friend Cece is conducting research on disaster management and relief efforts in Pacific communities, so she had staked out the center the previous day. At first glance we thought the building was closed, but as we walked around to a side street and entered through a courtyard we were greeted by a woman who introduced herself as the director of relief distribution. She immediately invited us to her office and we began a conversation by asking a few questions about her work. We started with standard questions about supply distribution, climate change patterns, and how she felt about her job. As I listened, however, I realized this woman's job meant something more profound. She spoke of the volunteer efforts that the program relies on, on the lack of delineation between foreign aid and local aid - they are both working for the same cause. Red Cross plays a supportive role from man-made disasters such as fires or toxins, to natural disasters such as the most recent cyclone that hit within
the past three years. Her role as a female disaster manager is groundbreaking here, and demonstrates the central role of women in a community. Here, each member plays a role and everyone is welcome, she says, that is who we are.

Hello to all back at home and a very happy birthday to my grandmother!