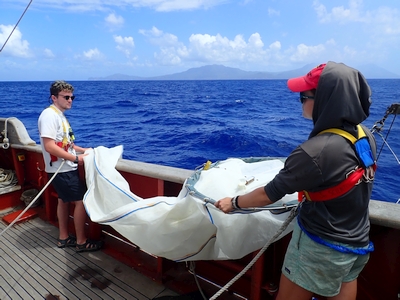 Pooh woke up to the sound of her name being repeated over and over again. She popped her head happily out of her bunk. The best thing about being woken up for morning watch was the chance to eat a little something (or perhaps a larger something) for breakfast before getting to work. She patted her dear shipmate thankfully on the head and began to hum to herself as she got ready. As she climbed out of her bunk, she cheerfully greeted her friend Eeyore (who often went by the name of Dillon). Eeyore was putting on his tail and gave her – what she understood to be a very excited - grunt. Eeyore was struggling with his tail again (which he called a harness). 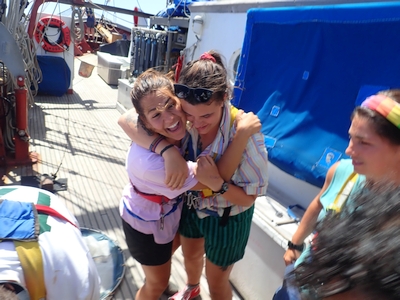 Pooh held out her arms to protect her head as she stumbled along towards the mid-head to brush her teeth. Her arms were an important and well-learned precaution she used so as to not bump into anything too painfully.

Moving ships were, of course, equivalent to gorse bushes in their element of danger. Pooh was especially happy today because Christopher Robin had informed her of a particularly special expedition which was to take place in the lab.

Pooh didn’t much like the lab on account of it smelling funny and often consisting of much more death science than life science. Besides, she was particularly fond of deck responsibilities and her time in the lab was causing her to realize that passion was not something that could be taught.

However, Pooh really did like Christopher Robin and generally seemed to learn something from her so she knew today was going to be pleasant. On top of that, her dear friend Eeyore would be with her as usual and he felt similarly about science and lab activity so she knew they would have a fun time making each other laugh to keep their spirits up. 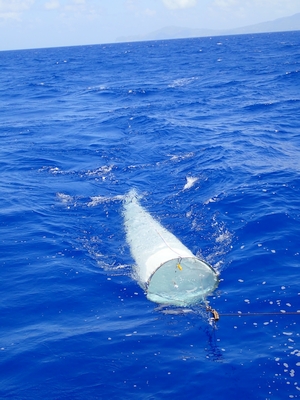 The meter net going down to 200 meters, on its way to catch a heffalump

During breakfast she chatted merrily with Piglet and Kenga. Piglet was telling a very interesting story about a dream she had had the night before and Kenga was nodding, eyes still sleepy but smile encouraging. Pooh’s mind had a tendency to wander and so it did, right over to Tiger who was helpfully passing some eggs to Rabbit. But Rabbit didn’t really notice because he was discussing very important things with Christopher Robin - it should be mentioned here that there are two Christopher Robins and this was the taller of the two.

Pooh also smiled to see Eeyore and Eeyore discussing one of Eeyore’s less-funny jokes together. This one concerned Sargassum and sarcasm. Eeyore –the Eeyore whose joke it wasn’t- was raising her eyebrows slightly.

Christopher Robin (the shorter of the two, the one with the special planned expedition) gathered Pooh and Eeyore in the lab at 0650. Pooh wrote a little hum in her head about time. It went like this:

Pooh was just in the middle of figuring out quite how bears felt about time when Christopher Robin said “Jessie” and Pooh said “yes” and tried her best to look as though she had been paying attention all along. Christopher Robin was explaining a net that would go to the depths of the ocean and maybe catch something cool because they were by a volcano. Pooh was glad Christopher Robin was there because she had heard about water heffalumps living at around 200 meters down and although she would really, truly want to catch a heffalump she wasn’t quite sure she would be ready to face it should it appear. 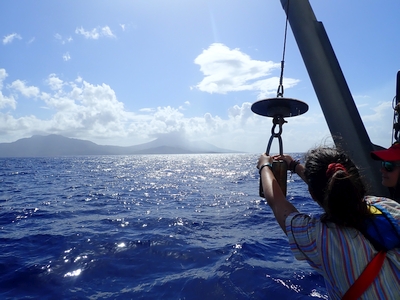 Pooh and the secchi disk.

When Christopher Robin stopped talking, Eeyore pontificated saying things like “corona virus” and “self-isolation” and “quarantine”. They had quite a busy morning in the lab interrupted by Rabbit bustling in to request their help with the mission of gybing. Hours later, as the meter net went in the water, Pooh was happy to meander down the ladder, feeling the need for a little smackerel of something, below decks for 10sies. To be continued…

PS- Shout to my dad for reading me Winnie the Pooh growing up, it taught me a beautiful way through which to see the world. Hey to my family! I miss you and I love you all. Stay safe and healthy.