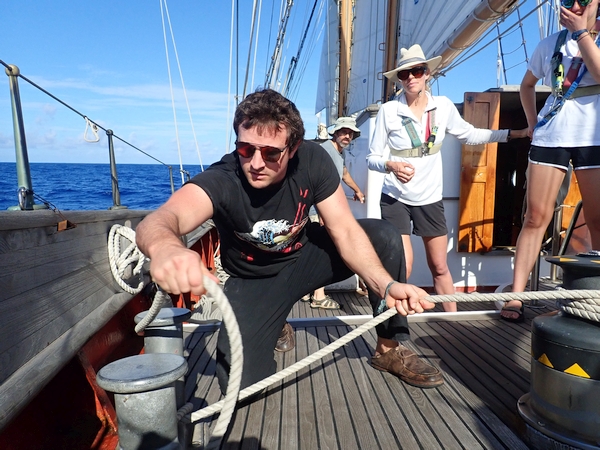 Steward Adam tactfully making fast (tying off the line) the main sheet, as (from right) Kerren, Carolyn, and Engineer JC look on in awe

With each passing day the anticipation for the well-deserved “land ho!” grows greater as we come closer and closer to Turks and Caicos. I’m quite certain I’ve heard “Turks and Caicos” said more times in the last 5 days than I have in my entire life. The excitement is palpable. Anticipation, for better or for worse, has also been building over the past few days as ‘Phase 2’ of our oceanic adventure comes to a close. 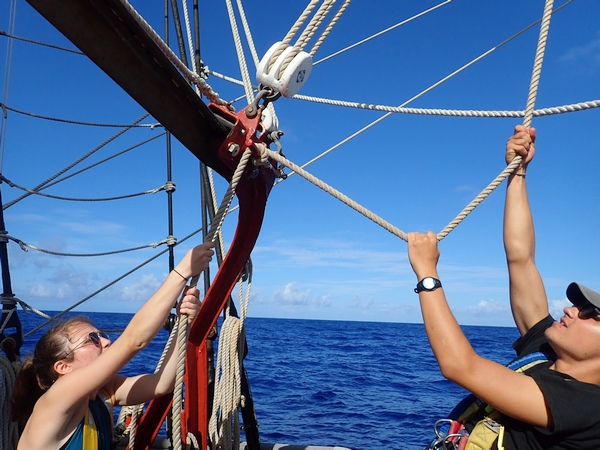 Sam and Alexis sheeting in the Forestays’l, Sam sweating the line as Alexis tails

As we move into ‘Phase 3’, our knowledge and seafaring instincts are about to be tested. In just a matter of hours, our trusty mates and scientists on watch will transform into mere crewmembers as we step up to the plate as Junior Officers of Lab and Watch (JLO and JWO respectively). We are excited and terrified to take on this massive new responsibility. Outside of our impending arrival to the Caribbean, and our preparations to take control of the vessel, we had a relatively average November 3rd aboard the Cramer at Sea.

The isolated nature of our tiny community is exemplified by the buzzing tension surrounding the significant day that November 3rd is on land. Just as we have managed to form a bubble of our own keeping out disease, we have also managed to keep out nearly all information and contact from the outside world. All the pros and cons of our information quarantine comes to a head as we prepare to take on the largest and most significant piece of news that has happened in the world during our absence (that assumption of course being made with no knowledge whatsoever of world news from the past four weeks). 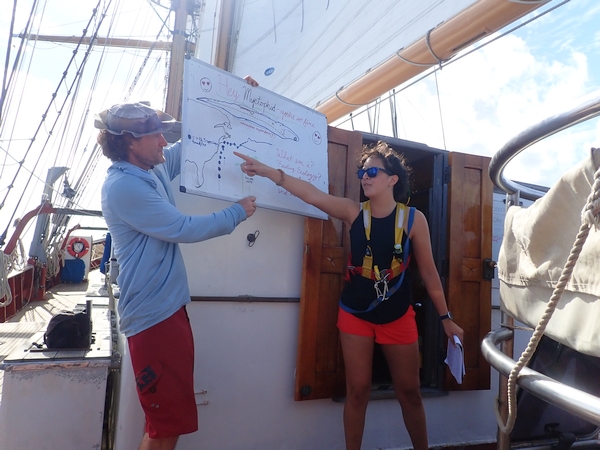 Lucia and Sarah (not pictured) giving their ‘Creature Feature’ on Myctophids, as Jeff holds their white board

As we prepare to burst our little information bubble, the crew aboard the Corwith Cramer falls on a wide spectrum of choices, the type of spread that would make for great toast, but poor logistics. Some of us believe election news is worth bursting our information bubble. Others, myself included, hold the bubble in higher regards than whatever news could make its way aboard. Once one person knows, it is difficult, if not impossible, to keep that fragment of information from spreading to the rest of the crew.

I’ve treasured the opportunity to stare out every day into a landless seascape, and hear only of the daily reports in navigation, weather, and science. So much of the novelty of this experience has been in its disconnectedness. We sit in the middle of the Atlantic, akin to astronauts, floating along at the whims of Neptune, not of the oval office. It is that escapism that I have cherished up until this point; to simply squander that for the sake of an early reveal would devalue this experience for me. That being said, I respect the desire to learn of current events, as it is news that would potentially have a direct and immediate effect on the crew upon arrival. There is little reason to withhold pertinent information from the ship’s company simply for the sake of preserving our existing seal from the rest of the world. “We’ve come this far” is no reason to willingly maintain ignorance from such significant world news.

That’s why we have chosen to attempt to bridge the gap that spans our preferences. We should theoretically be able to satisfy both ends of the spectrum. It will be a new and unprecedented challenge that befalls our ships community to attempt to maintain that mutual satisfaction of desires. I’m having a wonderful time.

P.S. M+D+C I miss you all so so much! They are feeding me well. No secret messages in this blog but look out for my next one on 11/6, a day with no significance other than that I will be writing another blog then wink. I hope there were enough periods in this writing ya nanner. To family and friends alike, take this notice as proof that I am still alive, although with each passing day the Bermuda Triangle drags me closer and closer to insanity.
Lots of love – Sam