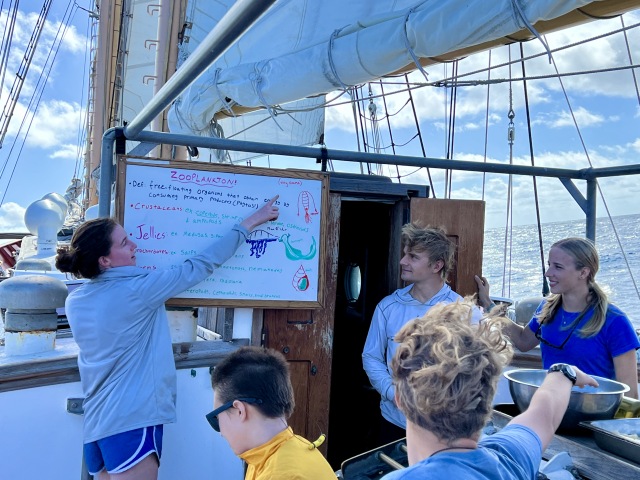 Weather / Wind / Sail Plan
Sailing on a port tack under the 4 lowers and the fisherman. C/O 200°PSC. Wind SSE F4

My time at sea has been nothing short of exceptional. Trying, yes, but rewarding in ways which my pollywog, landlubber of a past self could have never predicted. I have been fortunate in life to explore both the natural world and my place in it, yet nothing quite prepared me for this current adventure. When I started the program, I had few expectations and was simply following a love for the marine and a fascination with sailing. What I have found is an unexpectedly beautiful connection to those who have come before me and those who will follow, while deepening my own appreciation for life itself.

It is a unique feeling to be out at sea, hundreds of miles from the nearest spec of land, with only a ship to carry you to safety. I feel small and isolated, yet deeply tied to past generations who experienced similar feelings first-hand. I feel connected to the millions of individuals who crossed oceans on voyages of exploration or relocation; to those who travelled on their own accord or were forced to against their will. Sailing on this tall ship has given me a framework through which to consider the fictional and historical accounts of humans on the sea. What was going through their minds? What were the roughest seas they faced, and did they know how to swim? Did they feel the same awe I do or did their circumstances prevent the slightest glimmer of hope? In these thoughts, I can’t help but have a great appreciation for modern technology. Prior generations did not have such luxuries. There were no GPSs, no inflatable life rafts, no refrigeration to keep vegetables fresh, no drugs to prevent seasickness, and no motor for the windless Doldrums where ships of old could be stuck for months.

Despite the privilege of modern technology and my excitement towards the adventure, life at sea is a challenge. There are days when all I want to do is get off this endlessly rocking hunk of metal and curl up in a cozy, stationary bed. The sea sickness (even with medication), the isolation from family and friends, the roughness and unknowns of the ocean, and the vast emptiness of one’s surroundings can steadily wear you down. But the difficult days are infrequent and have the wonderful side effect of providing an immense sense of gratitude for the days of good health and a clear mind. The lows highlight even the simplest things in life, and what an incredible nebula of joy life at sea can be.

The distance from the outside world has allowed me to be present and truly appreciate all the nooks and crannies joy can be found. In the power and mystery of the ocean while getting drenched on lookout. In the regular yet unique way the sun rises and sets each and every day. In jumping off the 20ft bow sprit into 4000m of the purest blue I have ever known. In going aloft and admiring the vastness of the Pacific Ocean and how tiny we are in comparison. In the “A-Ha” moment of seeing the full extent of Scorpio’s tail for the first time. In the taste of a warm breakfast after a long, cold dawn watch. In slowing down to sit with a moment, a feeling, a person during the craziness of a day. In crossing the equator at sunrise with a cup full of steaming hot coco. In the Milky Way stretching from horizon to horizon while shooting stars pepper the night sky. In the beautiful, ever-changing fabric of an ocean at night as a squid light beckons organisms from the deep. In the feeling of community, one that was rendered nearly speechless when learning of our three port stops in French Polynesia. In the pure amusement and hilarity of feeling freshly shaven heads, both mine and others. In four straight hours of midnight giggles and falling into the world of haikus and limericks. In singing into the windy void. In watching a net filled with bioluminescent organisms as it rises out of the water on a clear, star filled night. The moments that have brought joy into my life are seemingly everywhere and the sheer number I have had while at sea is wonderfully astonishing.

The scientific component of our program has also turned my thoughts to the future. The data collected on this voyage adds to the growing bank of knowledge surrounding the world’s oceans as well as humanity’s impact on them. I cannot help but wonder if future generations will be able to witness the beauty of life in, and on, the oceans as I have. Are marine ecosystems currently in this century’s “healthiest” form or will they rebound if we can figure out ways to live in harmony with nature? I truly hope there will be a future in which people are able to share in the wonder of the oceans and through it feel similar levels of connection and joy. While I cannot know, I am wholeheartedly optimistic.

Much love from a hairless Shellback, 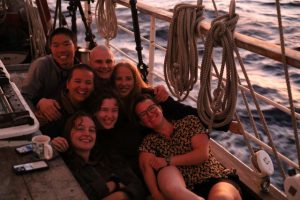