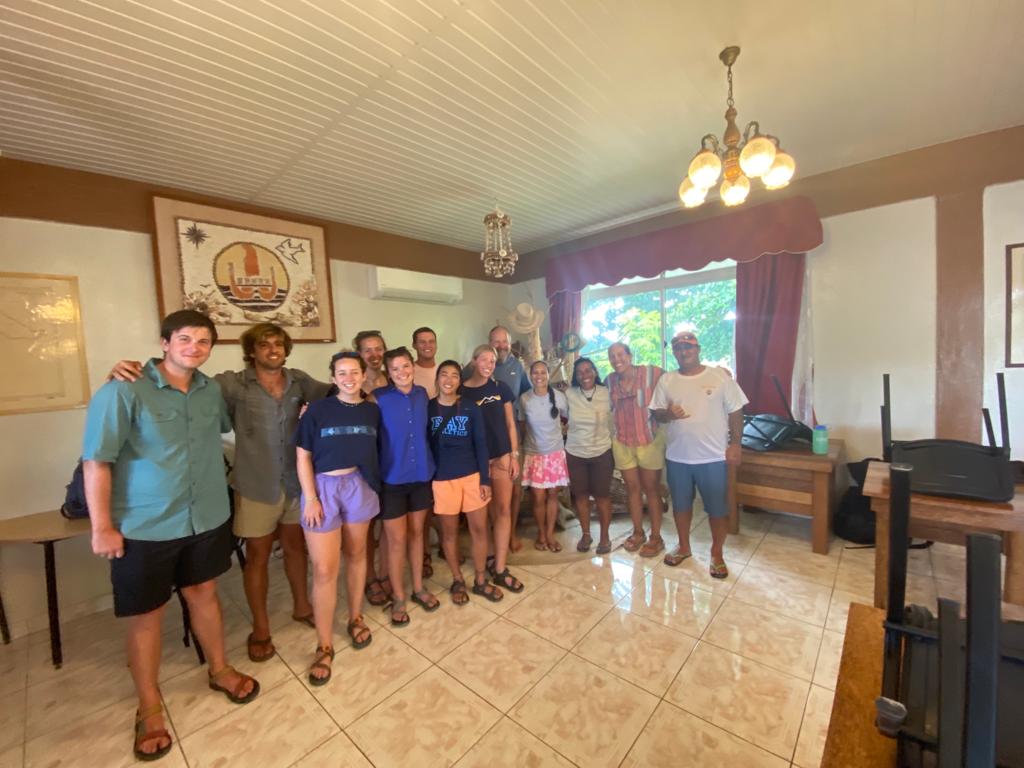 S306 at the Rangiroa Town Hall 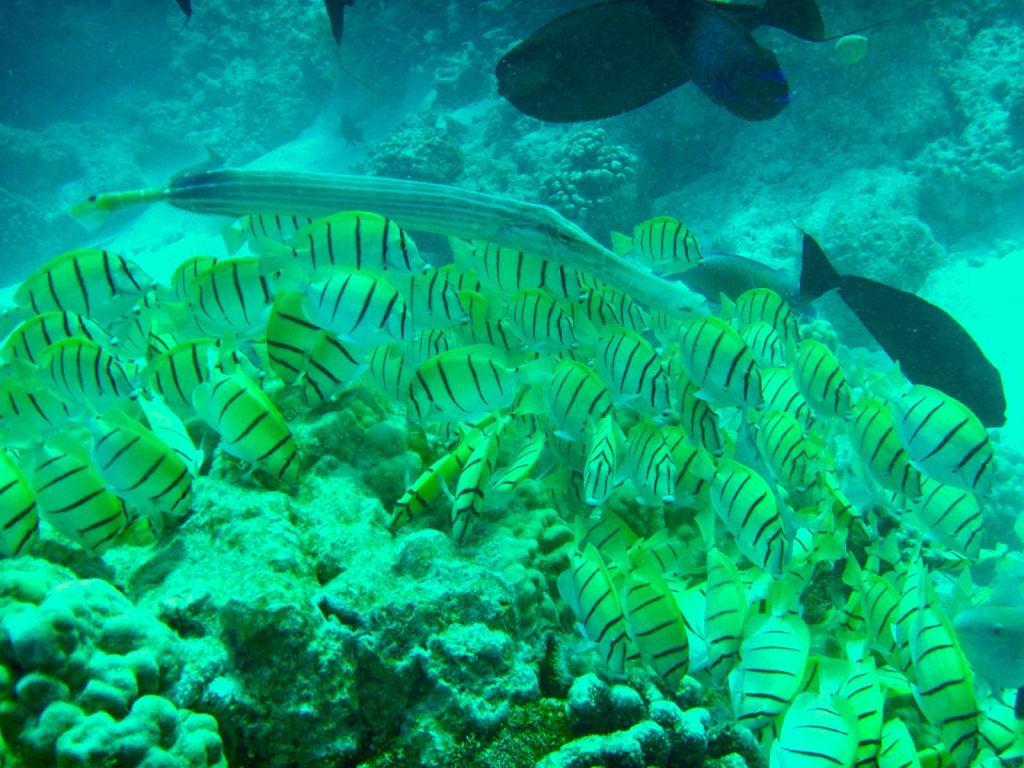 Wow folks, sorry to keep you waiting with bated breath. Life is a blur on the boat, a happy blur, but a blur. It feels like we learn something new every hour of the day. For example:

3:00am: If you're sleeping in the Fo'c'sle cabin and hear a noise that sounds like the bow is ramming into something, don't panic and leap out of your bunk. It's just the anchor dropping.

6:00am: Never assume you will not need sunglasses on your watch - even if you begin watch at 1:00am. The sunrise might still blind you on lookout.

11:00pm: even if the radar looks clear, squalls can materialize pretty quickly. Make sure your rain jacket is nearby, or be ready to take a nice, natural freshwater shower.

But what we mostly want to talk about today ("we" being Marley and Kate - hello fans) is our first port stop: Rangiroa!

Rangiroa, or Ra'iroa in Tahitian, is an atoll in the Tuamotu Archipelago. When we initially saw the island, we greeted it with a traditional Tahitian song before  sailing through a pass between two motus (islets). As we turned to sail through the pass, we were guided by a dolphin who swam under our bowsprit. Our first dolphin spotting of the trip!

We anchored in Ra'iora's lagoon (the water inside of the atoll), took a quick nap (Marley was coming off of her first dawn watch) ate lunch, and then the students headed out on the rescue boats to go snorkeling! It was a truly epic spot, filled with massive parrotfish, trigger fish, black-tipped reef sharks, butterfly fish, an octopus, and the largest moray eel that anyone had ever seen. Marley was personally freaking out - big eel fan.

After snorkeling, there was a quick turnaround and we headed back out on the rescue boats to the town of Ohotu. After being separated in two different watches (Kate, for example, is on B while Marley is on C), it was great to see everyone again on land. Though we still see each other on the boat, it's often in passing or during the turning over of watches, so very different than the constant contact that we all had on shore. We're a little co-dependent.

The next day we had an opportunity to be more formally introduced to the culture, government, and people of Ra'iroa. We traveled by bus to the Maire's (mayor's) office in the capitol city Avatoru where we had the chance to sit down with three community members. First up: Moira is the president of the NGO Tia'i Fenua (which roughly translates to Guardian of the Land), which has successfully banned plastic bags in most of French Polynesia through their initiative called Nana Sacs Plastqiues (Bye bye Plastic Bags).

Next, Simione is a local official who works with the PGEM or the office of local resource management and taught us about fish and lagoon conservation.

Finally, Maui is a local self-proclaimed environmental activist who manages all the waste on Ra'iroa. He also gave us a tour of the islands waste management site (located on a former lake which was filled in with trash and covered with soil). The tour may or may not have involved a ride on a forklift to look down into a giant can crushing compactor.

All three are members of Tia'i Fenua and truly live their beliefs. They are working tirelessly to leave a better island for their children and involve the community as much as possible. They want to change their island for the better and teach people to live sustainably, especially through community-based projects and increased education on recycling. Some of the issues discussed were consumerism, waste, reliance on imports, tourist impacts (such as increased plastic water bottle use), lack of reef regulations and protections (scuba diving, unofficial anchorages, etc), water pollution, and public health.

On our last day we piled into the rescue boats and made our way to the motu village of Tiputa, where we had some free time to visit the stores and eat lots of taro ice cream-and we mean LOTS of taro ice cream.

Across the street from the cafe, there were two beautiful jewelry shops where everyone spent lots of time and Tahitian francs. One aspect of Ra'iroa that was continuously evident was how amazing the shells are - and how they were incorporated into everything, not just jewelry but also wall hangings like chandeliers in the Maire, artwork, and more. Many gifts were purchased, and Kate got herself a whale tale necklace to replace the shark tooth she lost in Fare Hape.

Marley, Kate, and Katie then wandered down a road and sat under a tree to finish up some work and watch the ripping tide shoot through the pass. It was really nice to have some free time before our long passage to Nuka Hiva so we all took advantage of it as best we could.

Tiputa was such a great note to end our visit to Ra'iroa on. The people, dogs, art, food, and passion for community change and sustainability initiatives left a lasting impression. Everyone was in high spirits when we took off later that day (shouts out to Katie at the helm as we made our way back through the pass).

We finally, after much delay, received a letter from our sister program, Caribbean Reef Exploration. There was some mix-up in the receiving party (Bird may or may not have just assumed it was hers, opened it up, read it, and then forgot to give it to us. Unconfirmed). However, it was a lovely prank surprise.

We are all thinking of our CRX friends and hoping that they're doing well, seeing cool corals, and getting enough sleep. Though we miss you all, we're sure that you are absolutely crushing it at sea.

Remember to take lots of pictures and send them to us on Corbert Seamer when you all get off! And- karaoke reunion sometime? Frank is ready to sing some Iggy Azalea again. Marley suggests we meet in the middle (Minnesota) (best state).