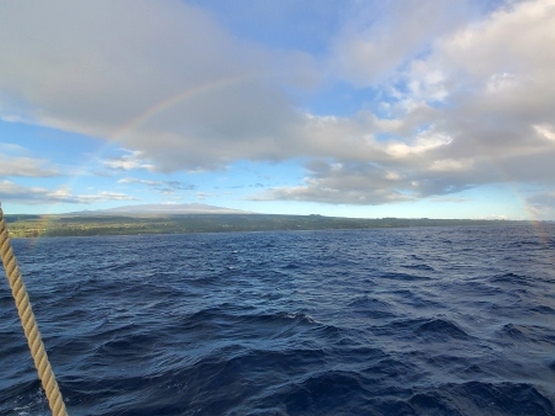 Mauna Kea in a rainbow!

Land Ho!!!  I didn’t hear the shout in the pre-dawn hours of the morning, but there she was when I came up on deck.  I guess you couldn’t technically see the land, it was a bit too dark for that. It was really more lights than anything else.  There were more lights than we have seen coming from outside the boat since we left Catalina Island a month ago.  Slowly as the sun light started brightening up the horizon, we could make out the shape of Mauna Kea, the tallest mountain in the world, if measured from its base at the bottom of the ocean.  As the sun’s rays brightened the sky further, we could see the snowy peak dead ahead!  The first whiffs of land in a month felt pretty good on the nostrils too.

Captain Sean was describing to us that the winds would come from the land in the morning when the land is cooler than the water, the cooler denser air flowing out to the sea.  Later on, as things heated up, which they certainly did, the warm air over the land would rise and the wind would come from the sea towards the land.  Good for folks going fishing and moving about the islands, especially before motors were put on ships.

We brought the ship alongside the dock where we said goodbye to our dear friend and shipmate Hannah.  It was emotional for everyone; we have formed a strong community bond over a month at sea.  Fair winds and following seas Hannah!!

This evening we find ourselves around 3 miles off the southern coast of the Big Island.  We can see the old lava flows where they met the ocean, rivers of black rock amongst the tropical green surroundings.  It is a pretty amazing and humbling sight.  Helps bring things into perspective.  A mentor of mine always says that we need to learn to live with the Earth, not just on it.