Lead up to the LAT 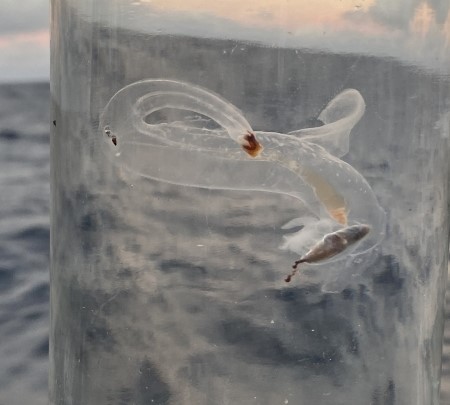 Weather/Sail Plan
Sailing under the Mains’l (reefed), the Main Stays’l, and the Three Squares (Course, Tops’l, and Raffee); Winds: Force 5 from the NNE (11-15 kts)

Hello, world! It's been quite the busy past few weeks, what with sailing a boat across the Pacific and all. In just under two weeks, we have made the Seamans travel nearly 1,500 nautical miles. For a while there, I wasn't completely sure if we would ever turn off the engine, but we've reached the Northeasterlies and haven't dropped the sails since.

It's incredible how quickly the miles flow by - everyone aboard has noticed the temps rising steadily. While steady winds mean steady progress, they also mean steady work on a rougher sea. The sails demand more of our attention every day. Luckily, we're really getting the hang of it all. In fact, we just started the "shadow phase" of the program. Basically, we'll be calling the orders and leading science deployments or sail handling under the supervision of our watch officers. This switch happened today and, honestly, was pretty intimidating. It's not easy to act confident after being thrown into the process just two weeks ago. The classwork is ramping up too - I shot my first sun sight with a sextant yesterday at Local Apparent Noon and got our latitude correct within five miles! It was really cool to use such an interesting device and accurately pinpoint our location. My peers have been taking multiple celestial fixes and are actively tracking our location.

In other news, the past two days have all been about preparing the ship for Local Apparent Thanksgiving. Basically, we want to celebrate the Harvest Feast/Thanksgiving but couldn't on the day of. So, we're just doing it tomorrow instead. In preparation, the entire crew took part in a deep cleaning called field day yesterday. It was pretty nasty stuff, but worth the efforts. It's gratifying to live in a cleaner space and to prepare the ship for LAT. Today, I helped make some pumpkin pies (while also struggling through mountains of dishes) and I plan on helping with the turkeys, mashed potatoes, and gravy tomorrow. It won't be the same as home Thanksgivings with sweet potato casserole and pecan pie, but I'm certain that the food will be incredible. The stewards here are truly talented cooks who I could stand to learn from.

After talking about this yummy food, I think it's appropriate to include a cool little critter we caught in one of our deployments today. I endearingly named him Dumbo the heteropod. Basically, this funky dude is a snail with a long snout, some flappy fins, and a vestigial shell (it's inside him, not outside!) Jan says that these are voracious predators. They're not particularly uncommon, but finding one this large in this area is pretty lucky! After an extensive photo shoot featuring my hand, Dumbo, and Jan's flashlight, we decided to give Dumbo the freedom he so deserved.

To Mom, Dad, Grace, and Paul - I'm sorry that I missed Thanksgiving, but I'll be sure to see you at Christmas! Love you all so much!