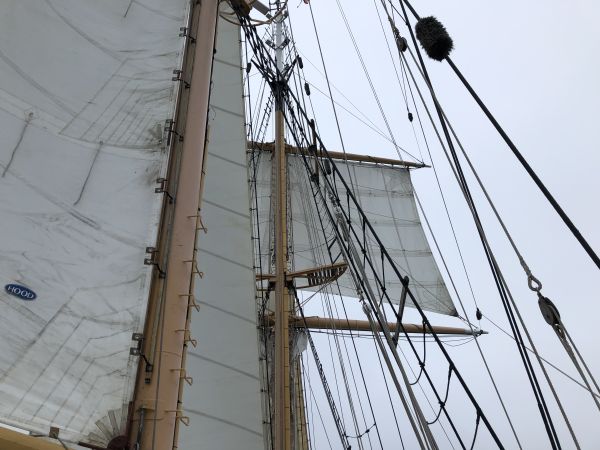 Tops’l seen from the quarterdeck.

Yesterday (the 28th) we had clear, sunny skies and calm seas passing through the Channel Islands. The fair weather continued into the night.  We tacked back and forth to kill time, as the plan was to depart the Channel Islands in the morning. There was moderate light pollution as we were still near land and the bright orange glow of the oil rigs, but a fantastic canopy of stars was visible. As I stood at lookout on the bow, I could look up and see Ursa Major (the Big Dipper) right off of our bowsprit. I may as well have been sitting in the planetarium at the Boston Museum of Science. The clear skies did not last, and the thick stratus clouds again filled the skies by morning on the 29th. It was rather damp in the morning, but not as chilly as the previous days had been. We conducted a Neuston net tow which collected some sugar kelp. The day was fairly mundane, with nothing but the occasional albatross to keep the lookout company. There was great excitement however, when the order was given to raise the tops’l (our upper square sail). In the late afternoon a mola mola was spotted off our port quarter.