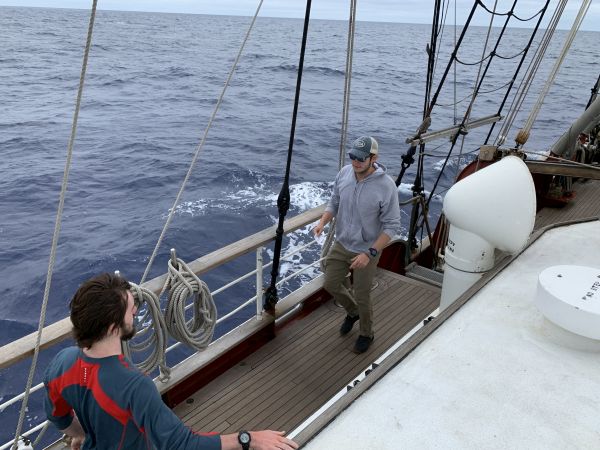 Tadhg and Sam, during line chase

Today was Line Chase! Each watch lined up, with A Watch on the port side of the quarterdeck, B Watch next to them, and C Watch on the starboard side. We were told the rules: each watch had a stack of flash cards. Each flash card had the name of a line on the ship written on it. The person at the front of their watch’s line had to take the card, find the line on the ship, and touch it. They would then return to their watch, and the next person would take a card and go. No running allowed—and if you get caught running, you had to crab walk the rest of the way. Those waiting for their turn could only say “hot” or “cold” to help the person from their watch who was up. The first watch to finish their pile would win. 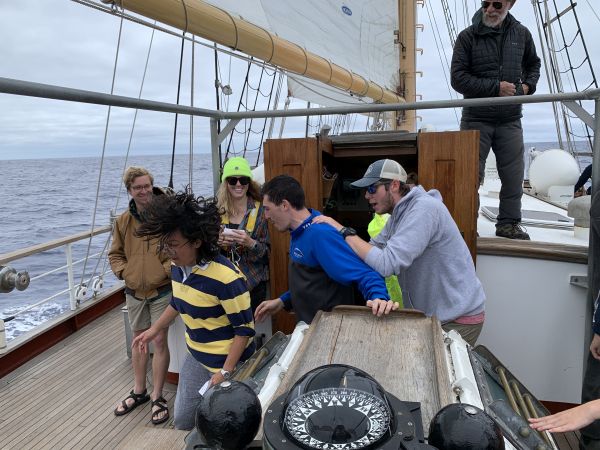 We had 48 lines on the ship to remember… and they asked us for a pickup line, too. At first, there was chaos. Three people speed-walked forward and 14 students on the quarterdeck erupted in shouts of “hot” and “cold.” C Watch finished their stack first, and set off in their final line - a conga line around the ship! A Watch and B Watch maneuvered around the conga line and continued, both with about a quarter of our stacks left to do. We were neck and neck! Until, as I got a card that said “Course Outhaul,” I saw A Watch form a conga line out of the corner of my eye. I found the course outhaul and returned as fast as I could. I handed my card in, and Christina got the card that said “Conga Line.” We formed our conga line, coordinating our kicks every three steps. As we passed Ava (Chief Mate) on the port foredeck, they gave us our consolation prize: “best choreographed watch.”

As we passed the rescue boat on the starboard side on the way back to the quarterdeck, Christina led our watch in a rousing song. And so, to conclude this entry as we concluded Line Chase…