Local Communities, MPAs, and Tourism in the USVI 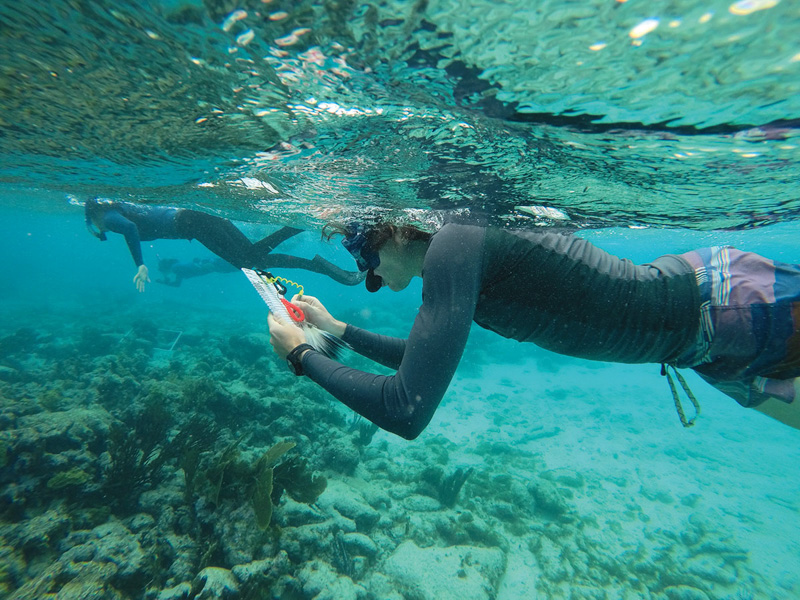 Weather / Wind / Sail Plan Force 2 winds from the NE, seas of 2-4ft from the ENE

Hello everyone! We are So Hess and Kyaralind Vasquez-Liriano. Our blog post will be centering on the policy brief we created during the shore component at Woods Hole. We have since ground-truthed our policy brief with the Human Uses of Ocean Space Census collected during our sea component and our interview with Dr. Kim Waddell, project director of the Virgin Islands Experimental Program to Stimulate Competitive Research VI-EPSCoR, a social and environmental research program that examines environmental issues in the Virgin Islands.

Our policy brief addressed the inefficiencies in current Caribbean marine protected areas (MPA) management, highlighting areas that we saw needed improvement based on our analysis and research on community-based management of Caribbean coral reefs. MPAs propose to protect marine areas of rich cultural and historical significance; however this not only excludes areas just as valuable that are not officially recognized as MPAs but also fails to consider existing stewardship, self-governance, and knowledge systems practiced by local people in these environments. For MPAs to be truly successful and effective in their respective environments, we strongly suggested that MPAs first work to center local collaboration and traditional ecological knowledge in their management protocols, eradicate injustice towards Indigenous and local peoples, and reduce stakeholder interest conflict.

In our policy brief, we outlined a few solutions that might help promote more effective MPA practices that would use socio-ecological analyses to better serve both human and ecological communities in the Caribbean. In short, our suggestions to policymakers included promoting sustainability and local collaboration while centering Indigenous leadership, clarifying objectives and critically evaluating MPA effectiveness towards meeting those objectives, and advocating for consistent funding to support grassroots and local efforts related to large-scale commercial fishing interests.

Our research indicated that there was an issue with the way MPAs functioned, namely the exclusion of local people's needs and livelihoods. This led to difficulty with compliance, then consequently a higher need for enforcement that was rarely adequately funded. When these systems were analyzed to include both ecological and conservation needs, like raising biomass and diversity, and balanced with local economic and livelihood needs, the results showed that MPAs and fisheries policies were operating ineffectively. While we wrote about the broader themes in socio-ecological systems management, our interview with Dr. Waddell gave us further insight into the challenges associated with building trust between locals and the government in the US Virgin Islands (USVI).

In our interview, we asked Dr. Waddell how have organizations like VI-EPSCoR engaged local fishermen in forming regulations to increase fish stocks/efforts that have been taken to apply sustainable practices from self-governed fisheries and community stewardship. Dr. Kim Waddell mentioned that while collective buy-in for restricting fishery use in the name of sustaining fish stocks is ideal, it is rather difficult to get fishers on the same page, especially if one group will be disproportionately affected by the implementation of a rule, no-take zones, or lowering annual catch limits (ACLS) for example. These rules, while having good intentions, actually create inconvenience and conflict among stakeholders.

So, what would a good and truly effective fishery policy entail? Research indicates that if MPA rules are informed by the needs and interests of the local people, then people are more likely to listen and willing to comply. According to Dr. Waddell, fisher communities in the USVI are highly diverse; types of fishing, perceptions of the state of the fisheries, age and levels of experience of each fisher differ across each island area, so organizing and trying to get these groups to come to a consensus about a policy that could mean less income/more work in the short term to implement presents a huge challenge and disparity. Thus, the harsh reality is that policies take a long time to be implemented and by then, the fishery in question would be in a worse condition and more drastic measures would need to be taken. The best tool or solution as proposed by Dr. Waddell would be learning from each other's experiences and each other's practices. Fishers would be more persuaded from seeing firsthand the results of case-studies where management practices have worked rather than having to comply with fisheries and government scientists. In one case in Southern Belize, fisheries are among the healthiest in the Caribbean largely due to the successful and effective management by local fishermen. Dr. Waddell told us about programs that fly in other Caribbean fishermen to Belize to learn about sustainable practices from fishermen for fishermen. These people then take home with them this new knowledge that then gets shared within their own communities and across seascapes, upscaling management decisions.

In addition to our interview with Dr. Waddell, we examined the way that humans used the ocean coastlines by recording data pertaining to human uses of ocean space at our port stops. One overwhelming theme we encountered was the prevailing use of these island spaces to be primarily for recreation geared towards tourism. On Thanksgiving Evening, we saw up to 13 recreational sailing vessels and yachts enter Rendezvous Bay on St. John, including a party boat with a nightclub onboard and what appeared to be miniature cruise boat. The bay had previously held less than 4 recreational vessels before the holiday, and we recorded no instances of commercial activity or uses of the ocean environment to serve local peoples.

Although many houses and mansions dotted the ridgelines above Rendezvous Bay, all lit with streetlights and telephone poles clearly visible from our anchoring, we saw few cars or transportation to and from these houses, which lead us to believe they are primarily vacation homes if not empty. We observed a similar pattern in the neighborhoods around Woods Hole, in which beachfront properties stood empty during the month of October.

The prevalence of tourist-centered uses of ocean space continued to other sites we visited. Magen's Bay on St. Thomas had similar uses of space to Rendezvous Bay, with recreational vessels and vacation homes making up many of the vessels and structures visible from our anchoring. In Perseverance Bay on St. Thomas, we anchored next to an airport which provided a different view of the tourism industry. While this was a less recreational spot with fewer sailing vessels and more airport infrastructure, it still centered on tourists. Air travel is one of the most popular ways to visit the USVI and provided us with a direct view of the stream of visitors to this region.

But what does this have to do with MPAs? Let's take Francis Bay, one of our mooring sites which is a national park and marine protected area. In Francis Bay, we saw fewer coastal properties due to its protected status, though an old sugar mill from the slave plantation era of these islands was still visible in addition to some houses and hotels outside park bounds. Although it was a protected area, it had the highest number of people seen onshore, ranging from 30-100 per small cove as recorded in our data during a 10-minute interval. All these people were seen engaged in recreational activities.

Additionally, despite the fact that our research permits did not allow us to touch coral due to restoration efforts within the national park, there was no observable enforcement, park rangers, or supervision of the many tourists snorkeling, sailing, windsurfing, and swimming near these protected reefs. We learned from Pedro Nieves, a researcher employed at the East End Marine Park in St. Croix, that there are big problems associated with recreational vessels anchoring without regard to how anchors can degrade reefs, and the way that tourist and chartered boats are very difficult to manage. We thought about his words when looking at the crowds in Francis Bay, and wondered how this MPA can make sure that every visitor who sails in on a party yacht is going to respect the coral reefs in a way that will preserve them. Highly trafficked areas can have adverse effects on ecosystems and the human uses of Francis Bay is an example of how tourism can shape an MPA in similar ways it shapes the surrounding economies and land uses.

In all the given examples we see the removal and erasure of Indigenous and local peoples who live on these islands and are descended from people who lived on these islands for generations. Only in St. Croix around the Frederiksted pier and in certain shoreline parks in Christiansted did we observe local people using the ocean spaces. In our stops in St. John and St. Thomas, these types of activities were virtually unseen from our vantage points in the water. This makes sense as St. John and St. Thomas host up to 10x more tourists per year than St. Croix. Though our research indicated that more support was needed for local people to have the power to govern themselves and steward their own environment, seeing the disparities up close drove home the point. These islands have been taken from those who have lived there for generations and been warped into tourist playgrounds in a pattern that permeates from a commerce and industry point of view right into how humans interact with the ecosystems. A great shift is needed to improve the health, resilience, and vibrancy of the most marginalized communities both ecological and social.

All in all, evidently, we see a constant cycle of mistrust between stakeholders and marginalization of local communities and the prioritization of the tourism industry again and again. We see a play-off between MPA policymakers and regulators who want good, reliable data but continue to reject local perspectives and local peoples' input in management decisions. Dr. Waddell's comments on fishermen's interests in the USVI highlight the difficulties in moving to sustainable fishing especially when the fishers and islands' income are heavily tied to tourism. We saw this trend and the reality of the data we collected on human-use of these islands and protected areas as tourists and non-locals entered and used these spaces as they pleased.