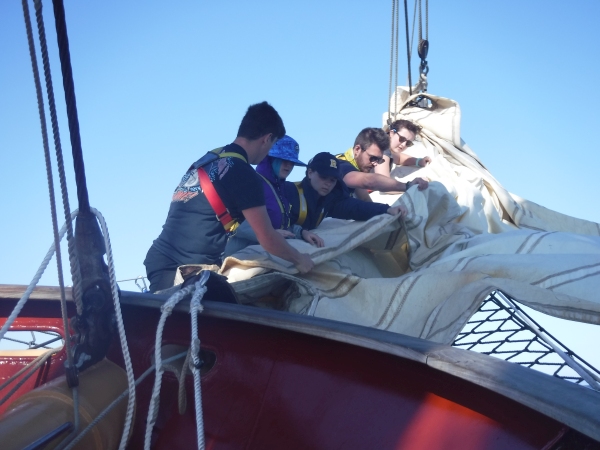 Furling the jib in-between conducting oceanography and looking at the megafauna that appears on the Hauraki Gulf, Aotearoa New Zealand. That's the author, Marija, with the Rochester hat in the middle.

Today, as I write this, it's our third day underway aboard the SSV Robert C. Seamans and things are going very well. Sometime during the night, we were even able to turn off our engines and now we are moving only by the power of the wind. Despite only having been on the move for a few short (but wonderfully long-feeling) days, we have already seen creatures I only ever hoped to see on this trip. Among these animals are sharks, penguins, and dolphins.

Sharks have been seen a couple times already on our voyage, although I was only lucky enough to see the first. It was just before we began motor sailing and were still at anchor beyond Auckland Harbor, next to the Motuihe Island. Those of us who weren't on watch were sitting on the housetop, waiting for the man overboard drill to begin. Then there was a big splash and everyone who looked over saw a shark jump slightly out of the water for a second time. It was just enough for us to clearly see the sharp dorsal and tail fins, identifying it as a shark. Everyone was ecstatic and more of our shipmates came flooding up from below decks to try to catch a glimpse of it, but we didn't see it again.

The penguins were also quite the surprise. During the shore component, we had been told that we might see penguins, but I was skeptical-surely the water would be too warm for them near our cruise track. If we saw them at all, it would have to be at the southernmost part of our voyage, where their habitat might overlap slightly with our trip. Low and behold, we saw a couple herds of blue penguins sticking their little heads out of the water a couple different times on our very first day. In all, there were probably at least fifteen of them, although they were far enough away that they were somewhat difficult to see. I am hopeful that we will be encountering them again soon, closer to the ship so we can get a better look
at them.

The dolphins were the most amazing. During our first day on the move, we first saw a pod a long ways from our ship. We all took turns watching them with binoculars. The next day, though, binoculars were far from necessary-five or so dolphins were swimming right alongside our ship, playing in the wake. They even swam for a while under the bowsprit, where everyone was amazed to watch them swimming and jumping so close to us. They swim so quickly!

The dolphins get even better, though.

During the evening watch, A watch had deployed the Neuston net, and it was nearly time to pull it back on deck. Just as we were preparing to, however, our chief mate, Rocky, told us to look at it. Now we had already been amazed by the net-when we sent it into the water, it seemed to glow as the bioluminescence it agitated lit up in a spectacular electric blue. For the whole half hour it was trailing beside our ship, it continued to glow, producing a vibrant trail behind it. When we went to look at what our mate was pointing to, the bioluminescence made it clear: a few dolphins had begun to check out the net and, similarly, were agitating the bioluminescence. We could see the dolphins perfectly illuminated, from their
noses to their tails. We could also hear them jumping out of the water, but when they did, they disappeared apart from the shining of their skin in the moon- and starlight as they left the bioluminescence.

The ocean has really put on quite the show for us these first few days. Aside from these instances, people have also seen whale spouts, a hammerhead shark, and jellyfish. What else are we going to be seeing these next few weeks?