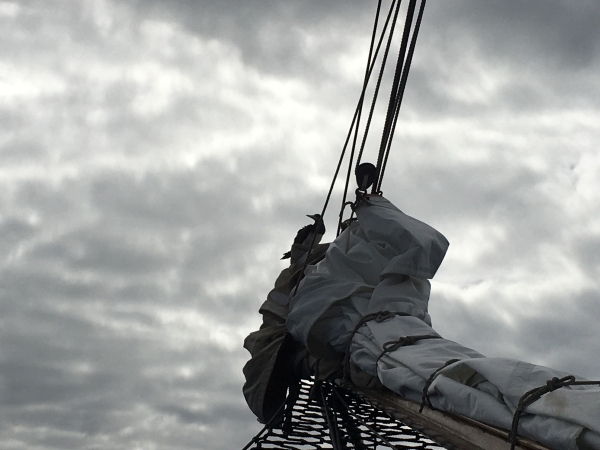 So it was my birthday yesterday and it was seriously the best birthday ever. Just being on this whole adventure is enough of a birthday gift, but yesterday all the stars aligned to make it an especially wonderful day. We’ve started seeing boobies (a type of funny-looking seabird) hanging around in the rigging of the ship. Before there was just one, who we named “Birthday Harold” (because he was the herald/Harold of my birthday), but today there were two: one I saw sitting up on the topsail yard while we were setting the main after reefing it, the other was flying around the area. Birthday Harold also allegedly dive-bombed Sophia a little bit the other night, but she says she’s over it.

There was also a pilot whale, and a tropic-bird (also called a “bosun-bird” because of its long tail, Sean said), some porpoises, lots and lots of flying fish, and a beautiful Glaucus pacifica sea slug. And we caught a mahi-mahi! Not only did the ocean show up for my birthday, but so did my shipmates. Talia (asst. steward) made some incredible cupcakes with lemon and coconut that tasted like eating the idea of the tropics, which we are now sailing in. As mentioned above, my friends also made such a nice card that I almost cried with happiness and appreciation when I saw it. I drank like 3 cups of hot chocolate over the course of the day too.

But that was yesterday. Today, we are squarely and officially in the trade winds, and it was my galley day! Like any other student on their galley day, I got to sleep through most of dawn watch (though I decided to wake up at 4:45 anyway just to hang) and then spent the day with Ashley and Talia in the galley. I tore up marshmallows into lots of little pieces with my bare hands, many of which became s’mores dip for morning snack. Today I also helped out with making soup, tacos, and a thoroughly choreographed presentation about the concept of a “mothership” as an organizational galley strategy.

The concept of a “mothership” is useful for serving salad or another dish in many bowls around a table- the mothership is the large dish with all the ingredients laid out in rows to be scooped into “satellite dishes”. When I first heard Ashley describing the concept of the mothership, my mind went to something Megan (2nd mate) said in our most recent abandon ship drill, referring to how, in the case of an emergency, we needed to make sure to tie the life raft painter onto the “mama Seamans” before it went down. So when I heard “mothership”, I thought Ashley was talking about the Seamans at first.

That little mental association stood out to me today as a sign of how I, and most likely many of my shipmates, are starting to see this vessel as our home, our shield against the waves, and our refuge in the swell. Though the Robert C. Seamans is so small compared to the vast expanses of the Pacific, so delicately inlaid with temperamental systems giving us power, water, food, and shelter, it is safe and comfortable here. There is no place more like home within a thousand nautical miles around.