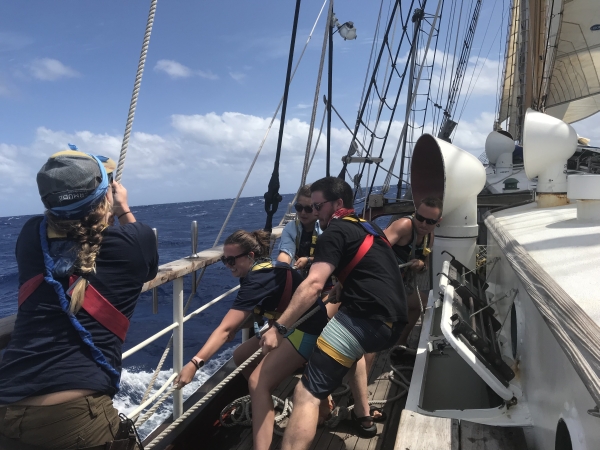 Today is officially October 1st after crossing into the international dateline. We have skipped September 30th which no longer existed for us. Despite the near gale weather, most of us have gotten over the sea sickness, which had us giving tribute to Neptune over the first few days. However a lot of us in the S-282 class have not yet gotten our sea legs and keep trying to maintain balance in an always moving ship. Personally I don’t know if I can ever shower again in fear of the previous night of sliding from one end of the shower to the other, slamming my body into the walls like a giraffe on ice skates. But luckily deodorant should do the trick.

After a crazy night of sailing when switching out the watches the crew members and staff made the decision to heave to, to stop our progression. “Heaving to” is using the sails and the rudders to work against each other to make the slowest progression and the safest position for a ship in strong winds. After heaving to, the staff announced the line chase which will happen tomorrow. A line chase is a relay race where our watch groups will compete against each other to show our knowledge of the line names and where they are located. We all look forward to this especially since the weather could make it interesting. Considering that it has only been a few days on the boat I know very few lines mainly because of the borderline English names such as Mains’l Jigger, Raffee Halyard, and Tops’l Outhaul. All of which are a perfect example of the names of 40+ lines. However, I plan to study them as best as I can and help my watch group with the relay.

In just two days we will arrive in Tonga and we are all excited to experience the unique Tongan culture and work on our projects. In addition we just received the news that we were granted permission to work on a project in Tonga alongside NASA. This opportunity is rare and I’m super glad to be able to participate in it. Hopefully with this, I can get my foot in the door to become an astronaut.