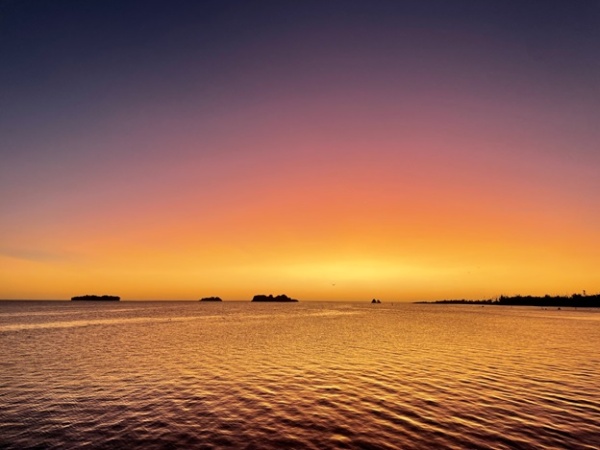 The first sunset for our three-day adventure in Palmyra. Yeah, I could get used to this. Look at all the pretty colors!

Weather / Wind / Sail Plan
Bright and sunny alongside the dock in Palmyra! Currently no sail plan as the sails are covered for the remainder of our stay at the atoll.

After 21 long years (as of today), you would think I would have no reason to scream out of pure excitement like a child. By the time you turn 21, the world thinks of you as a “true adult.” You’re supposed to be wise, sophisticated, maybe even make a name for yourself. At least, that’s what I’ve been told/seen over the two decades of my life. But me? Oh, the joy I felt as soon as someone yelled “land hoe!” as we spotted Palmyra Atoll in the distance. 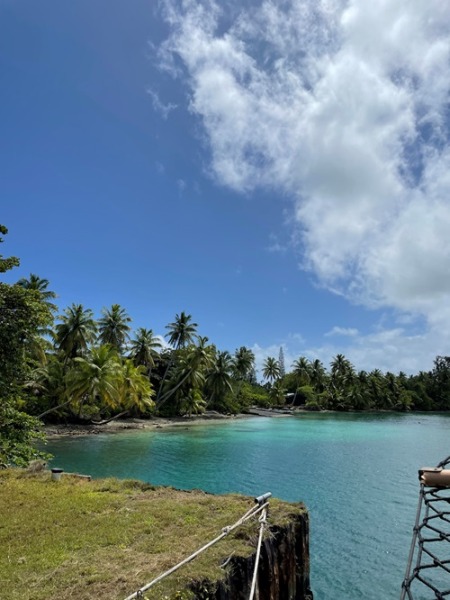 The scenery around the Seamans, with a cute little house and a beautiful beach! Gosh, it is GORGEOUS! Shoutout to Jenn for walking around with me to take a photography walk around the dock.

The anticipation has been killing everyone ever since we found out that we were going to a protected wildlife area rather than just sailing the Big Blue. The journey has taken us a few weeks, many line pulls, a few science stations, and a bad sunburn here and there, but we’re here. As we sailed (it was more of using the engine, but nobody needs to know that) closer, my excitement grew and grew.

Now, earlier in the day my watchmates helped me celebrate my birthday by doing what they called a “Birthday Muster” at 0000 during Dawn Watch. I thought that would be my highlight of the day. Boy, was I wrong. Did I have any idea we would enter Palmyra on my birthday? Not until a few days prior, no. Did I lose my mind as we entered the beauty of this old, half-underwater volcano? Of course! You would be crazy not to. Did I almost fall over a few times as I speed walked around the boat? Maybe. (Don’t look at me like that.) The sights around use will never leave my mind. Hopefully, you can tell some of the beauty from the pictures. The blue of the water as we came closer to land. The sway of the trees because we haven’t seen plant life connected to ground in two weeks.

The stunning horizon line with a distinction between coral reef and open ocean. I mean, how much better can you get? Staying on an atoll in the Pacific? While doing science? Incredible.

For the remainder of the day, B Watch did some dock connection as we finally got permission to stay ashore rather than anchor somewhere in the lagoon.

There were many-a fender and fender board moved with pure sailor strength and determination (and not wanting to fix it if the boards fell in the water). B Watch continued Afternoon Watch until 1900. Our schedule got a little all over the place, though, since we planned for a swim and walk on Strawn Island – located not far from where Seamans docked – at 1430. Before we left, though, the whole boat had a surprise for my birthday, of course, for my unknowing self.

They came up on deck, hands filled with trays full of red velvet cupcakes (per my special request), and everyone sang me a big happy birthday! Although I couldn’t be home for a classic ice cream cake, the vegan cupcakes were FANTASTIC! Best cupcakes I’ve ever had. After the little birthday celebration, we all gathered on the small boats and made our way to Strawn for fun water activities along the beach. Gosh, it was beautiful. The heat, not so fun. But the scenery? Like nothing you’ve ever seen. I wish I could describe the hue of the water and the feeling of standing in the wake of a coral reef. All I can say is that it was glorious.

And it was just outside the reef, so many shells washed ashore. We looked at so many beautiful little shells and corals, as well as found some hermit crabs and Red-Footed Booby fledglings! Isn’t the marine ecosystem just fascinating?

Once we finished our beach exploration, we had a fantastic dinner by Cat, Gracie, and Eban (thanks, guys!). We watched the sky alight with colors as the sun set upon our first day in glorious paradise. Everyone was in awe of the different pinks, blues, purples, and even reds! And it just kept changing as the night went on. If you haven’t heard the rumor about a green flash as the sun falls below the horizon line, well, it’s true. Next time you watch a sunset, keep an eye out and you just might see a true conspiracy.

You may think that was the end of our adventure for the day, but no. It was time for Science @ Night with the scientists of Palmyra! They set up some cute little benches, put out some candles to keep the mosquitoes away (did you know there were mosquitoes on an atoll? I didn’t! Thanks, US Navy), and held up a sheet between two big trucks for their presentations.

So fun! Perfect for our little ragtag group of up-and-coming sailor-scientists. The Palmyra pals presented on some projects they have been working on recently, mostly having to do with island conservation, coral reef restoration, and pelagic conservation. They talked about the idea of “Flipping the Forest” and have continued with that goal through the protection of Red-Footed Boobys, mosquito and coconut tree removal, and even a Bird Disco! Shoutout to all the labbies here, you guys are wonderful. And so knowledgeable! After our little science night, it was time for bed. I reflected on the day in my journal, laid back with my bunk fan on, and snoozed away the heat with thoughts of ocean breeze and sandy beaches on my mind.

Shoutout to everyone back home! I miss you guys so much, and yes, I am writing in my journal and taking many pictures (like, SO MANY). You also might want to learn some vegan recipes. And up your knots game. Your girl is coming back KNOWLEDGED.